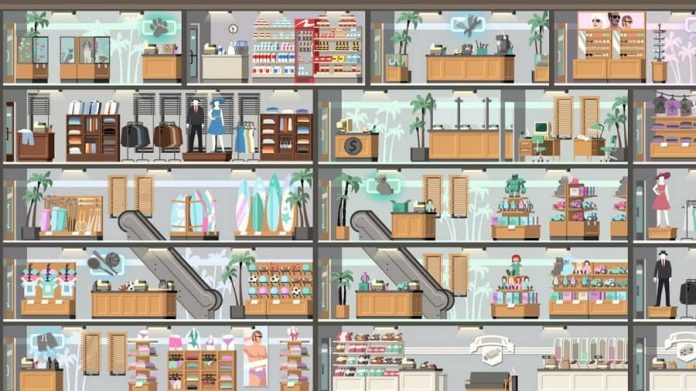 I could have spent my weekend exploring the wild west on the back of my horse, but instead I was in the heart of a city, building a skyscraper 50 storeys high. And I loved every minute of it.

Project Highrise from SomaSim has been available on Steam since 2016, with various DLCs following in the two years since its release. Now, it’s available on Xbox One, PS4 and Nintendo Switch in the form of Project Highrise: Architect’s Edition, which includes all previously-released DLC. As far as city building games go, it’s one of the most engrossing I’ve played in a long while.

Imagine Fallout Shelter crossed with SimCity 2000. Like Fallout Shelter, Project Highrise is a 2D builder where we build upwards. And like SimCity, not only have we got to build the correct amenities, we’ve also got to make sure everything’s connected to the power grid. Sometimes it gets messy – keeping on top of everything that each resident needs can be tricky, especially when you’re just getting started. But once you get into the swing of things, seeing your building expand and thrive is massively rewarding.

For most, the main draw of the game will be its basic ‘new game’ mode, simply giving you the freedom to build your own tower from scratch. You can tweak a few settings before you begin – the location of your building and the difficulty (you can give yourself unlimited money if you like, but doing so voids all achievements) – but then it’s all down to you. Project Highrise has four main building types: office, residential, commercial and hotel. Which type you want to focus on is entirely up to you, and that’s the beauty of the game. Build a prestigious residential address if you like, or a massive shopping destination. Or build a giant resort hotel with all the amenities a guest could dream of. You will have to mix and match, though. Apartment residents will want shops and restaurants in their building if they’re to pay good money, and office workers will want somewhere to grab breakfast and lunch. Balancing these needs as you expand is the key to success in Project Highrise, and trial and error is all part of the fun. 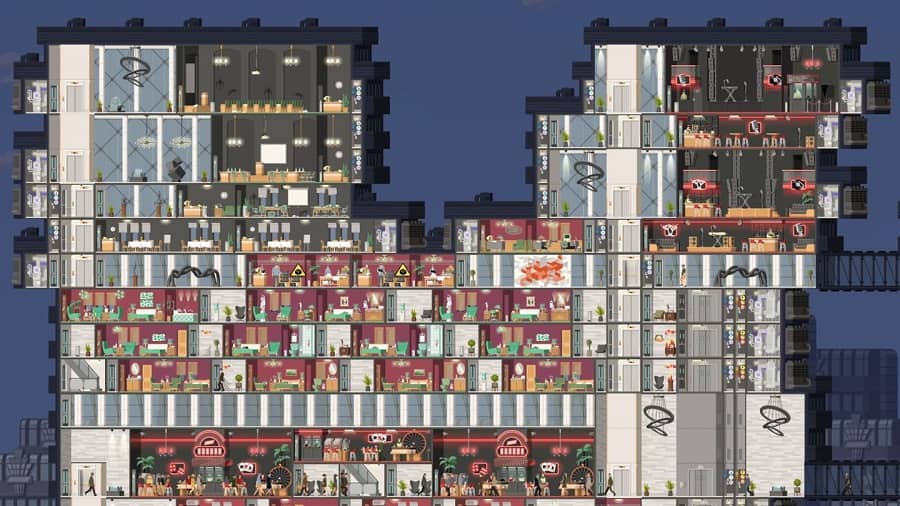 No matter how you decide to approach Project Highrise, it seems quite difficult to get your feet off the ground. Even starting with a few small offices or apartments, those residents need a certain number of amenities to be happy, and when you start with only a modest budget, it soon gets eaten away. Thankfully, the game offers a number of ‘contracts’ that can be taken out. The contracts offer a small upfront payment in return of you agreeing to meet their requirements – something like building X new offices/apartments, or having X amount of visitors or residents in your building – with a bigger payout once it’s completed. Some can take a while to meet, and the upfront payment won’t be enough to cover it, so you’ll have to work at it for a while. You can have two active contracts at any one time, and if you’ve already met the terms of one before accepting it, you’ll automatically receive the payout.

For the times when money is very tough, there are a number of loans you can take out and pay back over time. I’m not sure how I’d have got through the early stages of the game without taking out a loan – it was very much a lifeline. But after being in the red for what felt like a long time, spending more than I was earning, there came a point where it turned around. Once my building grew to a certain size, with a mixture of apartments, shops, restaurants and offices, I was earning more daily revenue than I could possibly spend, allowing me to expand my building with no limitations. Soon, I had luxury penthouse apartments with hot tub patios, luxurious family homes and a premier hotel filled with presidential suites. Seeing my building thrive in such a way was thrilling. 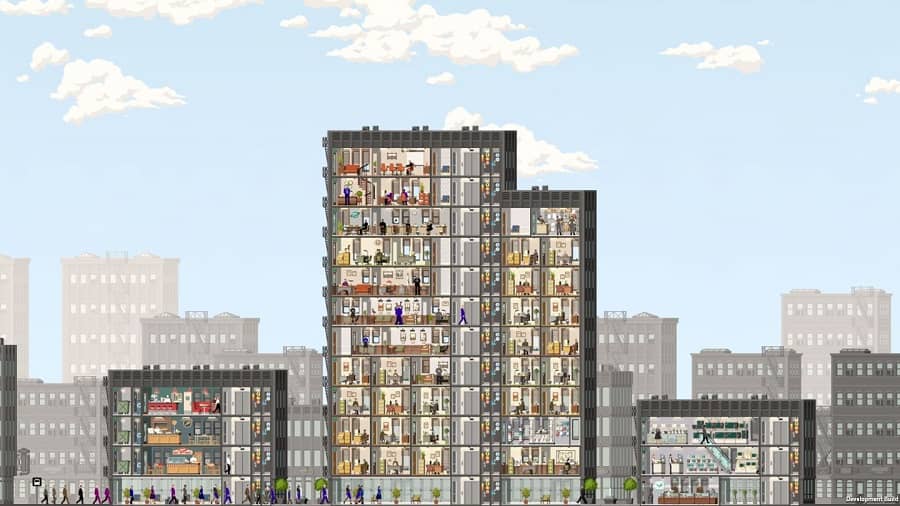 If you like a little more direction and a more focused end goal, Project Highrise offers 29 scenario challenges to work through, each giving specific conditions to work in and a target to work towards. The first one, for example, requires you to develop a thriving retail empire – but during an economic depression. You’ll be rewarded one to three stars for each depending on how well you’ve done, and you need to finish the first before moving onto the next.

Whichever mode you decide to play in, there’s slightly more to Project Highrise than simply building fancy apartments, adding a few shops and restaurants and expanding offices. Your whole building needs maintaining, and premises will get worn down if they’re not regularly renovated. Each type of premises has its own needs – for instance, offices require on-site services like bottled water delivery, file storage and photocopying, while your more demanding residents will want services like an on-site gym, childcare and a car parking space. Basically, it means if you want to add that luxury one-bedroom apartment, you may need to add a whole floor full of amenities to support it. But once you’ve got them, they’re there for good, allowing you to expand even further. 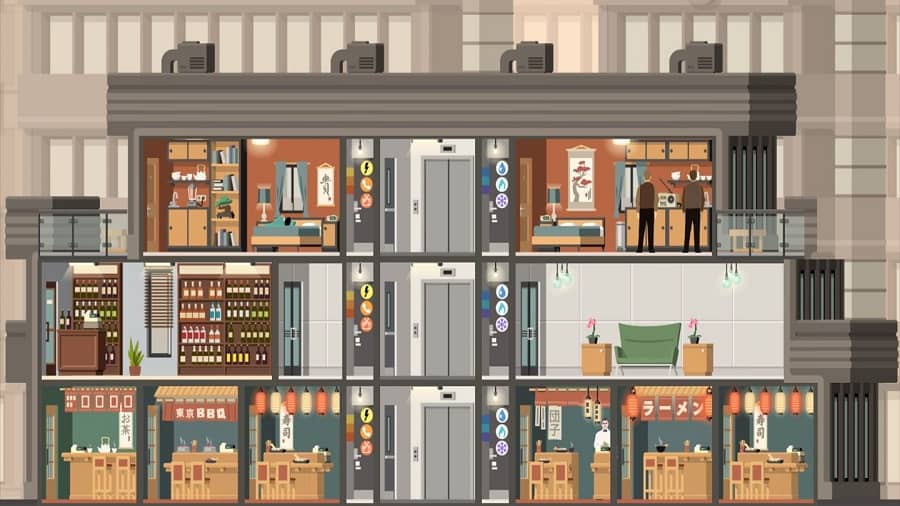 It takes some time to get used to all of Project Highrise: Architect’s Edition‘s systems. It’s fairly simple at first glance, but it has a lot of nuances that you can only really learn by playing. The game offers six short tutorials to teach you the basics, but for the most part, you’re on your own. Thankfully, most of the game is pretty easy to get the hang of, but even after 10+ hours with the game I still found myself Googling a couple of things that the game had never shown me.

Although perhaps because of this, succeeding in Project Highrise feels like even more of an achievement, because you’ve done it yourself. It’s been a while since I’ve been so engrossed in a city building sim, but Project Highrise really is the full package. It’s simple to get to grips with for those who want to keep things small, but if you want to aim for the sky – literally and figuratively – it has all the tools to let you do that, too. Now if you’ll excuse me, I’ve got a fancy office demanding I build them a helipad, and it won’t build itself.

Project Highrise: Architect’s Edition is available on Xbox One, PS4 and Nintendo Switch. We reviewed the Xbox One version. 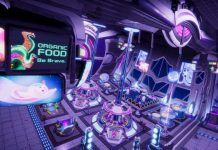 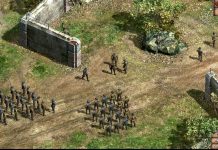