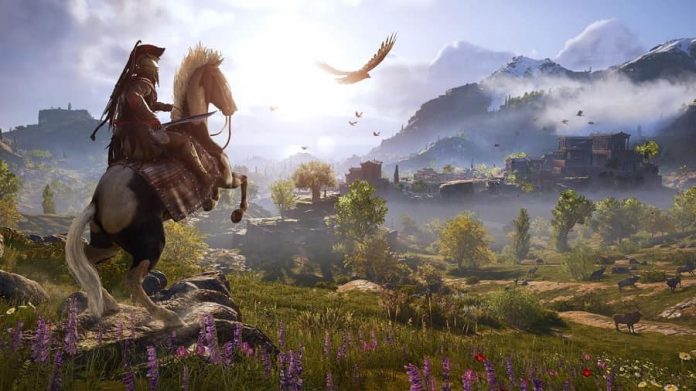 I mean, don’t get me wrong, it’s brilliant in its own way. But if you saw it in action and didn’t know it was called Assassin’s Creed Odyssey, you wouldn’t assume it to be the latest game in the long-running series. It’s an engrossing open-world action RPG that just so happens to have the Assassin’s Creed title slapped on it.

Anyhow, as much as I’m loving exploring the game’s depiction of ancient Greece, there are a handful of things that are irking me about the game. Really stupid things that don’t affect my enjoyment of it too much, but are still really, really stupid. Well, just take a look for yourself and see if you agree with me or not.

Only you can swim

In the world of Assassin’s Creed Odyssey, apparently only you can swim.

As you sail from one island to another, you’re bound to come across countless ships going about their business. Sometimes they might be brave and attack you, though most of the time it’s your own aggression that starts conflict. It doesn’t matter if the occupants of the other ships are sailors, pirates, merchants or soldiers though: if they fall overboard and end up in the water, they never get back up.

It really does seem like Kassandra (or Alexios) is the only person in the whole of ancient Greece who has mastered the art of swimming and climbing, and combining the two to once again rejoin her crew onboard. Why not make the most of it and knock as many enemies overboard as possible? You might as well.

You’re really not an assassin

How many Assassin’s Creed games have there been now where you’re not actually an assassin? A few, at least.

In Assassin’s Creed Odyssey, you really aren’t an assassin though. You’re a mercenary through and through. While your character does find more of a purpose to kill as they progress through the game, they’ll still happily take care of any old Tom, Dick or Harry for a handful of Drachmae. There doesn’t even need to be a good reason for it. You’ll meet a sweet old woman in the wildnerness who’ll just crack out “you need to kill this man because I don’t like his hat!” and you’ll be on it like a car bonnet, impaling him with your spear without a moment’s hesitation.

In Assassin’s Creed Odyssey you’re nothing more than a ruthless sword for hire who also happens to have a personal agenda. It’s not very virtuous, is it?

Just whose side are you on?

When it comes to the warring Spartans and Athenians, I wish you’d just choose a side and be done with it.

Assassin’s Creed Odyssey‘s conquest system in general just seems half baked really. I mean, exactly what is the point of it? You wear down a faction’s control, initiate a war, win or lose, and then wham!, another leader takes control for you to start the whole process again. There are no repercussions; it doesn’t change the world in any meaningful way. The whole system just feels unnecessary and redundant. Also, it’s really silly that you can just wander into both Spartan and Athenian base camps without anyone batting an eyelid, yet if you find an outpost out in the open world, its inhabitants will try to rip you apart on sight.

I just wish the conquest system played more of a role in the game instead of being a side-excursion that never lives up to its potential. It feels wasted, and that it doesn’t change if certain enemies attack you on sight or not is just silly.

Playing Assassin’s Creed Origins, I honestly thought that the modern day happenings in the series might have some worth again. We were introduced to Layla and she could explore a little. She even got to kill some Abstergo goons. It seemed like a fresh start that could go somewhere. Assassin’s Creed Odyssey seemingly ruins that.

For full disclosure, I haven’t finished Assassin Creed Odyssey‘s story yet so things could change, but I bet they won’t. Up to now, the game’s modern day scenes have been extremely few and far between, brief, and wholly uneventful. They don’t add anything to the game whatsoever.

I think it’s time that Ubisoft just dropped them to be honest. It should just focus on creating interesting historical stories. It’s obvious that there’s no real aim to the modern day guff now; no eventual endgame. Ubisoft ruined things with Assassins Creed 3, and now the modern day storyline should be abandoned. The series would be better for it.

This is perhaps the most ridiculous thing in Assassin’s Creed Odyssey, the fact that you are effectively a slaver; one thing that the assassins are supposedly against.

The new lieutenant system allows you to recruit enemies and other characters to assist you with your naval endeavours. You can also unlock a skill that allows you to call them to distract enemies on land, too, if you’re that way inclined. The stupid thing though, is that the enemies you recruit don’t really have any choice in the matter.

After incapacitating them with a sneaky blow or kicking them down with a Spartan Kick, you simply take them into your service with the press of a button. There’s no “would you like to serve as a lieutenant on my ship?”, you just send them on their way without any debate. Whether they like it or not, they work for you now.