For over a week now I’ve been beavering away at the company’s follow up to its 2010 hit, often sure that I was nearing its story’s conclusion. But it kept going on and on, shocking and surprising me in equal measure. “It won’t really be 60 hours long,” I thought, “that’ll surely include getting a gold rating on every mission”.

I’ll happily admit that I was wrong; something I realised as my story completion reached 90% during the game’s epilogue. So, with 10% of the story left, I threw myself further into the world of Red Dead Redemption 2, eager to see things through to a conclusion. And I just couldn’t help chuckling to myself that the game’s epilogue alone is bigger than most single-player story-driven games that make it to market these days.

Red Dead Redemption 2 is an open-world game like no other. Sure it has missions, side content, and the other usual trappings, but never before has an open world felt so cohesive, real and alive. As you live out your life as one of the Van der Linde gang’s most valued members, Arthur Morgan, you get the sense that the world doesn’t revolve around you, which rarely happens in the world of video games. While there are markers placed on your handy map to point out where story missions and other certain activities can be started, much of the game’s additional content plays out naturally as you explore.

You might hear a commotion in some woodland as you pass, for example, and find some prisoners attempting to escape their chains. Or you might hear the screams of a lady coming towards you, until you see that she’s hogtied and being taken away against her will on the back of someone’s horse. Whether or not you take the time to intervene is up to you, but you need to act fast if you do want to take action as time doesn’t stand still.

There’s an element of living in the moment in Red Dead Redemption 2, and it makes the game unpredictable and exciting. You never really know what’s going to happen from one moment to the next, and it’s your snap decisions that shape whether you’re an outright villain or a kindhearted ruffian out to make a living the only way they know. 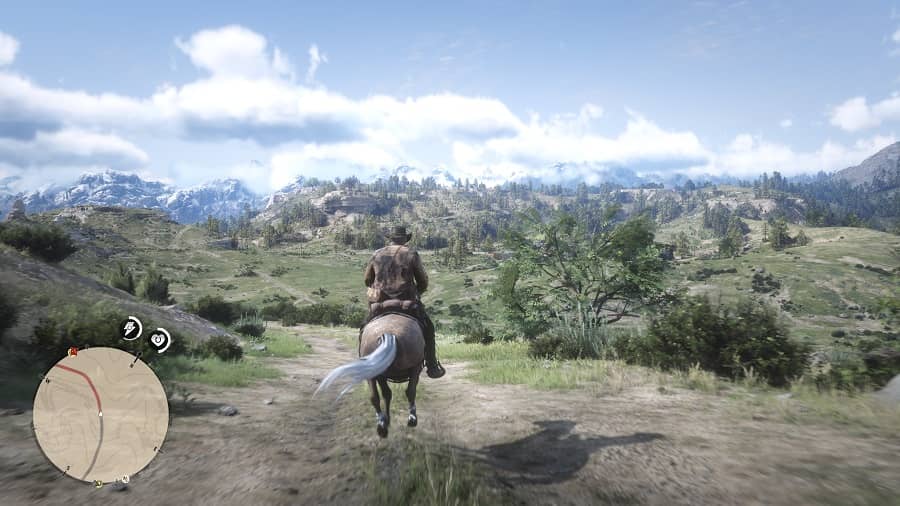 Central to your interaction with pretty much everyone you meet is a contextual dialogue system that allows you to get your point across, one way or another. By locking onto a character with the left trigger, you’re given a range of options depending on the circumstances, with “Greet” and “Antagonise” being the most common of what’s available. But the dialogue system can also be used to instigate robberies, defuse dangerous situations and eke information from members of the public. It feels wonderfully natural, even though most folk don’t really have a great deal to say. The same system also allows you to interact with your horse, enabling you to bond with it over time to make it more responsive to your commands.

At first, I have to admit that I was worried that Red Dead Redemption 2 would have too much micro-management. Bombarded by constant hints and tips during the early hours about such things as maintaining weapons, brushing horses and maintaining my weight, I feared that I’d spend a great deal of time performing menial tasks in order to get by, or suffer the consequences for not doing so. After many hours of play, however, I found that such tasks weren’t the troublesome chores I’d expected them to be.

In fact, I found myself so immersed in Red Dead Redemption 2‘s world that I took to maintaining my guns and looking after my horse as if my life depended on it – not because I felt obliged to, but because I wanted to. It felt like the right thing to do, and it’s all made so intuitive and natural to do that it soon becomes second nature. Feeding myself on a regular basis, however, fell by the wayside. Becoming underweight, I found my health would deplete faster than normal, but it seemingly never worried me enough to gorge myself on the food that I had hunted. 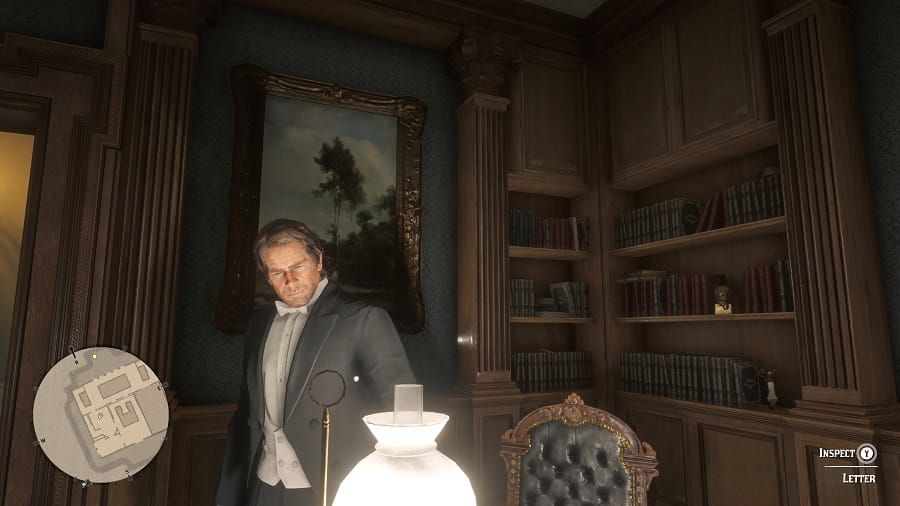 It really feels like stepping foot into a new world when you’re playing Red Dead Redemption 2; a feeling which is only further enhanced by the game’s stunning visuals. Playing on Xbox One X, I can hands-down say that Red Dead Redemption 2 is the best-looking game I have ever played by far. Textures, lighting, special effects, draw distance; it’s as if every setting has been turned up to eleven.

The result is that every location looks photo-realistic, while characters are perfectly animated and move like they have a meaning. Stand still and life goes on around you in a believable manner, making your subsequent actions feel like they have more impact. Shooting an innocent bystander by accident or injuring your horse is likely to genuinely leave you saddened, and those who are squeamish might not want to skin the animals they hunt unless they want to make themselves queasy.

As with any video game, it’s the gameplay that really matters though, and Red Dead Redemption 2 excels there, too. You’ll find yourself engaging in all manner of activities throughout the game, from shovelling manure to robbing banks. Sometimes you’ll employ stealth to achieve your goal; other times you’ll go in all guns blazing. Quite often you have a choice between one or the other. The game’s story balances its high-octane moments quite well, interspersing them with missions that build your knowledge of the world and its characters, giving certain events more impact when they play out. And while there’s one section of the game that eventually devolves into a protracted firefight, its sense of urgency propels you along until things can finally get back to normal. 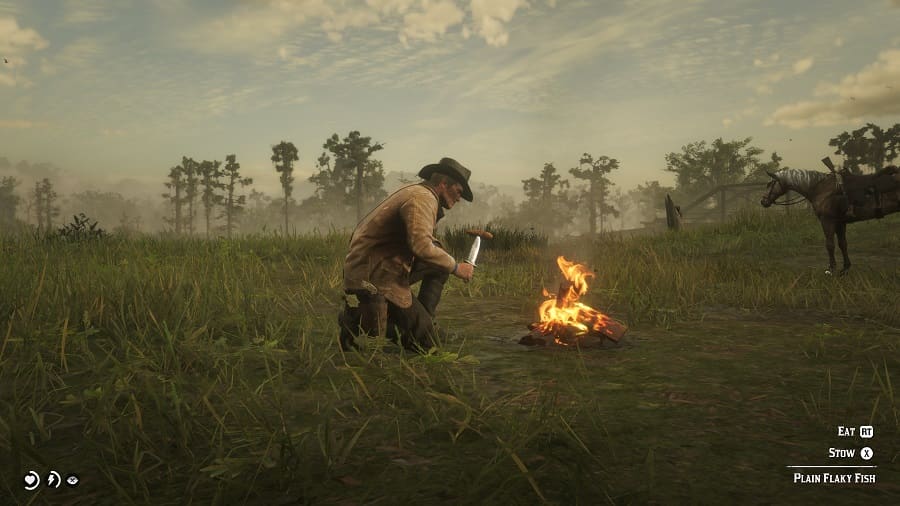 Of course, you can also take a time out between story missions. Fishing is an enjoyable excursion, and one that’s safer for your health than robbing trains or carriages. Bounties are also available for those who fancy being on the right side of the law for a change. There are even legendary gunslingers spread across the world that someone would like you to meet, and a whole myriad of collectables for you to discover. When Red Dead Redemption 2‘s story is over, there’s still likely to be a wealth of things for you to do. And you can also replay any of the game’s story missions at any time, allowing you to try and obtain the coveted gold rating on them all.

Perhaps the only area where Red Dead Redemption 2 sometimes falters is in regards to its controls. In combat, movement can occasionally feel a little clunky, with getting into cover being particularly cumbersome. It’s an issue that irritates, but it’s never enough to ruin your enjoyment of the game. In fact, it’s only because of Red Dead Redemption 2‘s otherwise excellent level of polish that it sticks out. While I have experienced a few graphical inconsistencies and gameplay glitches during my time with the game, they’ve been so rare that they tended to stick out more when they occurred. Ultimately, you’ll be having far too much fun during shootouts to let those times where your character doesn’t behave as expected when moving in and out of cover really bother you. Engaging Dead Eye and taking out five or so rival gang members in a row never gets old, especially when the kill cam kicks in to make an impressive shot even more cinematic. 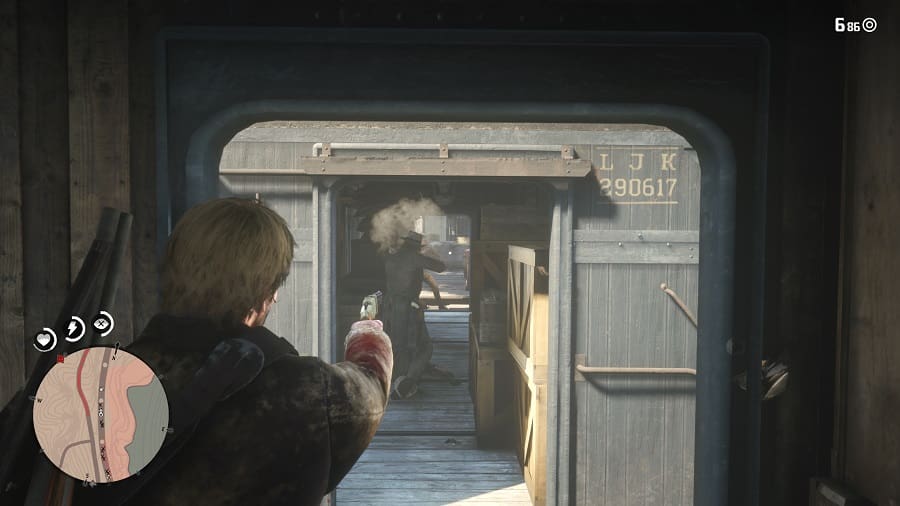 ‘Cinematic’ is perhaps the best word to describe Red Dead Redemption 2. But the story the game tells is too grand for the cinema; too epic in scale. Red Dead Redemption 2 is like a big-budget eight-season Western placed on Netflix all at once, only you can play through it instead of just watching it. It’s a game that makes a mockery of cinematic games such as Detroit: Become Human, demonstrating that you can have strong storytelling in an open world, as well as involving and intuitive gameplay. It tells a mature story that deals with loyalty, love and loss without holding back any punches. It shows us how certain events in one’s life can provide clarity. It hits you in the gut at times, but only because it does such a good job of making you feel for the ragtag bunch of outlaws that it places you with. You really will grow to love some, while utterly despising others.

Some will initially be frustrated by Red Dead Redemption 2‘s lack of a true fast travel system, and many will be irked by its controls from time to time, but they’ll continue to play, I guarantee it. Why? Because its open world is beyond anything anyone has ever experienced before; its realism and interactivity is unprecedented. Furthermore, Red Dead Redemption 2 has one hell of a story to tell, one that’s not only gripping in its own right, but also adds more weight to the events in its predecessor which takes place years later.

The years spent shaping Red Dead Redemption 2 into what it is has been worth it. Rockstar hasn’t just created a video game; it has created as close to a living, breathing digital world as can be. It’s not so much something that you play, it’s something that you visit and experience. Something you willingly get lost in. Red Dead Redemption 2 is the result of years of blood, sweat and tears. And it shows, making getting yourself absorbed in it feel all the more special. This is the new benchmark by which open world games will be measured, but none will be meeting its heady heights anytime soon.

Red Dead Redemption 2 is available on PS4 and Xbox One. We reviewed the Xbox One version.