One of the joys of playing Marvel’s Spider-Man is switching up Spidey’s outfits, swinging around as Spider-Man Noir or climbing buildings wearing only pants and a mask.

With the release of Spider-Man’s first piece of downloadable content, the total of suits you can don is now up to 31.

But while there are some excellent outfits in there, we want more. Here are seven Spider-Man outfits we’d love to see come to Insomniac’s web-slinging extravaganza.

Spider-Man acquired the Venom symbiote during the Secret Wars arc and has since put on other similar (but less sentient) costumes. Here’s his chance to prove that black never goes out of fashion.

A dying Doctor Octopus hijacked Peter Parker’s body and, resolving to prove he could be a better hero, became The Superior Spider-Man. Donning a new costume, he resolved to put right things that once went wrong, hoping each time that his next leap would be the leap home. No, wait; that’s something else.

It’s a bit of a throwaway reference, admittedly, but after underpants Spider-Man, the next logical step in ridiculing the webslinger is to have him swinging around in a spare Fantastic Four costume, with a big on his head (as seen in The Amazing Spiderman Vol. 1 #258).

Before there was Sam Raimi, there was CBS’s Spider-Man, a 70s TV show which relied on some (literally) ropey effects. Perhaps Insomniac could give Spider-Fans the opportunity to revisit this era, complete with outsized web-shooters.

Speaking of Sam Raimi’s Spider-Man movies, there’s a wonderful deleted scene in which J.Jonah Jameson, played by J.K. Simmons, clowns around in the Spider-Man suit. Why not give players the opportunity to swing around with a cigar in their mouths, shouting at pedestrians?

Imagine if Spider-Man became a zombie and went around devouring human flesh. – who’d be crazy enough to write a story about that? The answer is Robert Kirkman, creator of The Walking Dead, taking the blood-stained baton from Mark Millar. We’d pay good money to see Zombie Spidey in Marvel’s Spider-Man. Though given that, since Disney’s take-over, only villains are allowed to be zombies, we have our doubts. Still, we can dream – of tasty, tasty brains. 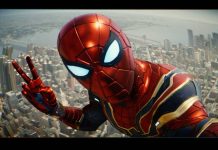