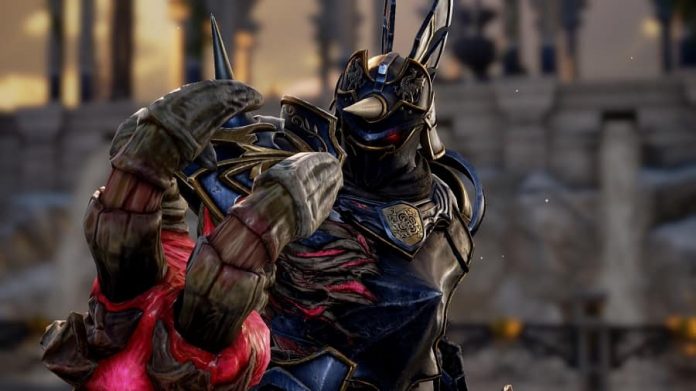 Way back in 1997 I played a weapon-based fighting game called Soul Blade, and you know what was remarkable about it at the time? Its single-player content.

I remember being totally absorbed in Soul Blade‘s Edge Master mode, travelling from one location to another with a character to unravel their story, do battle under a range of scenarios, and unlock new weapons. And when one character’s journey was over, I’d jump right back in with another. At the time, it was truly groundbreaking.

When the time came to do a follow up to Soul Blade (called Soul Edge in Japan), the series’ name became Soulcalibur, but sequel after sequel one thing remained a focus: a wealth of single-player content. That doesn’t change in Soulcalibur VI. In fact, it’s one of the things that saves it from being quite an underwhelming experience overall.

Despite being called Soulcalibur VI, this new entry in the long-running series feels like a reboot. It opens with a basic retelling of the story covered by Soul Blade, and then effectively continues from there. As such, its roster of fighters draws heavily from Soul Blade and Soulcalibur, although there are also a few taken from newer entries in the series for good measure. Add in two new fighters, Grøh and Azwel, and guest character Geralt of Rivia, and you have a fairly sizeable cast that displays a lot of variety. 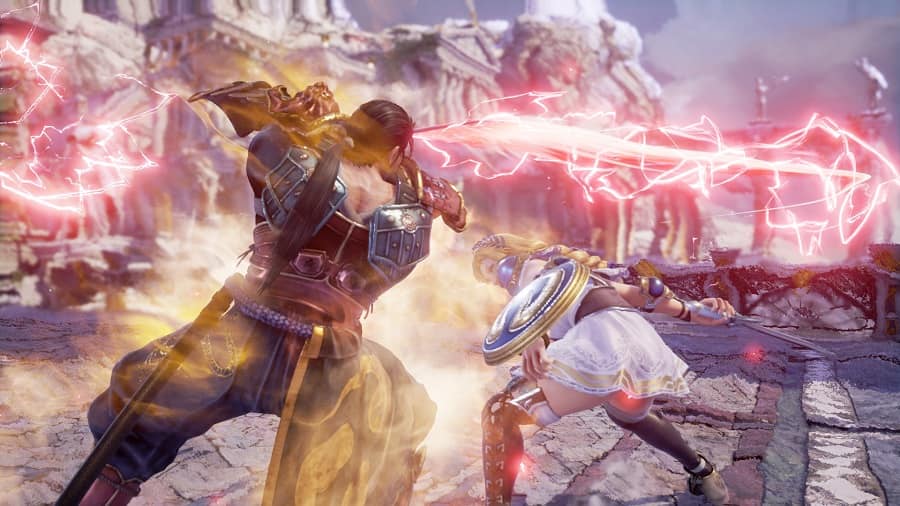 In Soulcalibur VI‘s main single-player mode, Libra of Souls, you don’t play as any of the game’s established warriors though. It’s all about creating your own character and embarking upon a grand journey with them. Libra of Souls is effectively an RPG, allowing you to travel around a map, progress an involving story that changes depending on the decisions you make, and obtain new weapons and items. It very much feels like a throwback to the original Edge Master mode, and it’s very welcome.

Battles in Libra of Souls are played out under a number of conditions, always keeping the action interesting. Sometimes the floor will be slippy, for example, meaning you need to be cautious which moves you use in case you inadvertently fall outside of the ring. Others may have you starting with reduced health, or with only kicks being effective. Quite often there’ll be combinations of modifiers in effect, and you’ll also have to defeat multiple opponents one after another. Every fight in Libra of Souls will keep you on your toes, and that’s what makes it so compelling.

Perhaps the only thing that will be disappointing about Libra of Souls for some is that it isn’t voiced. The story unfolds purely via text boxes displayed over art, along with character portraits when a conversation is occurring. Soulcalibur VI‘s story mode, Soul Chronicle, also unfolds similarly, but that does have voice acting. The main path through Soul Chronicle will only take a few hours or so to complete, and will have you taking control of Kilik, Maxi and Xianghua. There are smaller stories for each and every one of the game’s cast though, further bolstering Soulcalibur VI‘s single-player offerings. 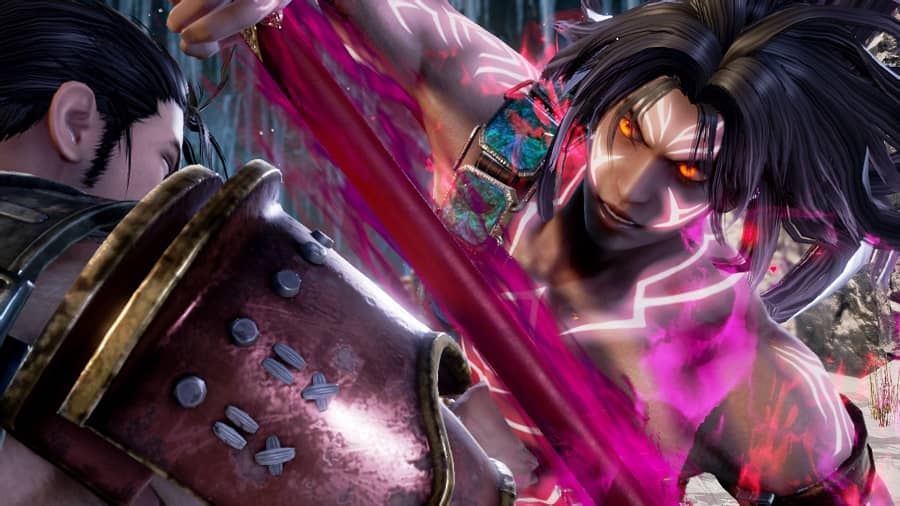 Unfortunately it’s one of the Soulcalibur series’ long-established features that is the biggest disappointment in Soulcalibur VI: character creation. While there are 16 races on which to base your creations, the number of armour pieces and accessories available to customise them with feels limited. Also, there are no additional fighting styles to apply to them other than those of the 20 warriors who make up the basic roster. Don’t get me wrong, it’s still fun tinkering with the character creator, but it feels like it could have been so much better. Hopefully a wealth of items will be added to it after launch.

Aside from the three modes discussed above, Soulcalibur VI offers little else of note. There’s an arcade mode when you want a quick burst of action, a versus mode where you can fight against another local player or the CPU, and also a training mode where you can get to grips with each character without any pressure. Needless to say, it’s a shame that modes such as survival and time attack aren’t present. Online play is present, too, but you can tell it isn’t the focus of the game. You’ll be happy with the quality of matches, but you won’t be impressed with the limited online options available.

Across all the modes I’ve played to date, what’s really made Soulcalibur VI a pleasure to play is its tried and tested fighting system. With its eight-way movement system and horizontal and vertical attacks, combat is tactical and exciting. Soulcalibur has no imitators, and it means each iteration of the series stands out amidst the ever-growing pool of fighting games. There are some new gameplay features in Soulcalibur VI to keep the fighting feeling fresh though, such as the Reversal Edge System and Critical Gauge. 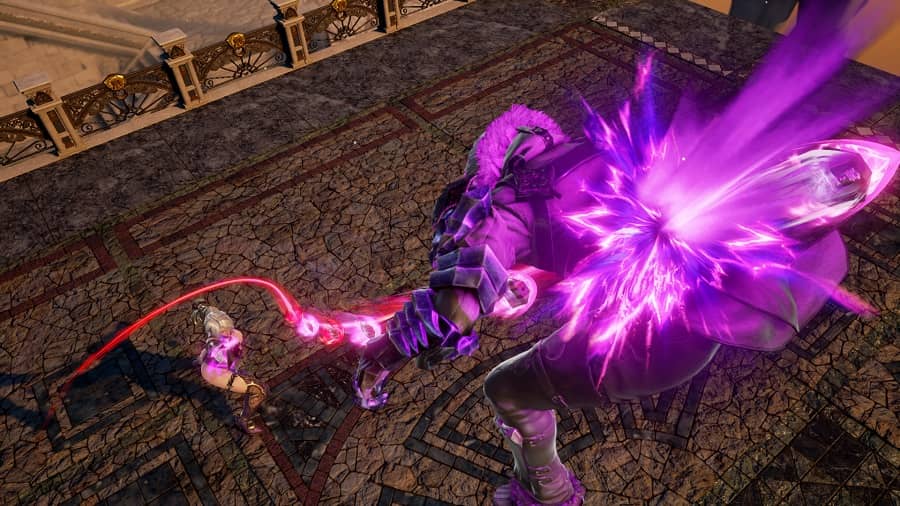 Hitting an opponent with a Reversal Edge instigates a rock, paper, scissors-like standoff, where one character ultimately seeks to gain the upper hand. Depending on the character and move used to win the clash, you may be able to follow up with a devastating combo that will change the outcome of the battle. The Critical Gauge, on the other hand, powers your flashy Critical Edge techniques, but can also be used to temporarily power yourself up for a period of time. How you use it is up to you, but making it count is often key to winning.

Presentation-wise, Soulcalibur VI is inconsistent. Character models generally look nice during battle, but when zoomed in during loading screens you see that some textures are pretty low res. Created characters are often prone to clipping, too, depending on the items you’ve adorned them with. Stages are also a mixed bag. Many of them look rather nice indeed, but some are underwhelming due to blurry textures. Playing on Xbox One X, I was overjoyed to find that Soulcalibur VI is enhanced for the hardware unlike Tekken 7 though. Picture quality is great, and so is performance which remains wonderfully smooth.

As mentioned at the start of my review, without Libra of Souls, Soulcalibur VI would have been quite a disappointing entry in the series. It’s missing some modes that you just expect a fighting game to have as standard now, its character creation feels like a step-back, and visually it doesn’t really impress. Thanks to Libra of Souls though, Soulcalibur VI is undoubtedly the best single-player fighting game available right now. And while its online features don’t push the boat out, its unique brand of combat should make it essential for competitive fighting fans too. There’s just nothing else quite like Soulcalibur out there.

Soulcalibur VI is available on PS4, Xbox One and PC. We reviewed the Xbox One version.