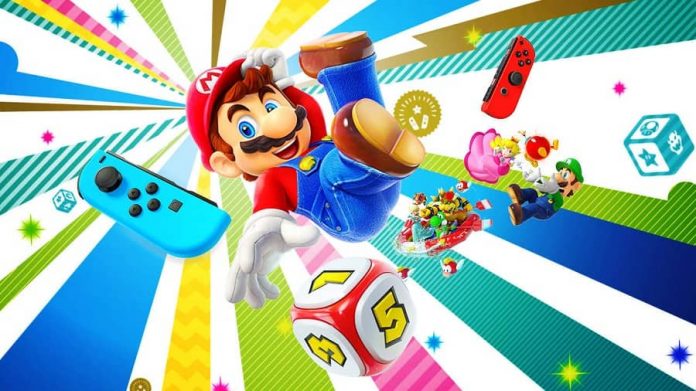 It’s been a long time coming, but now that it has arrived, it’s clear that Nintendo has pulled out all the stops for the popular franchise. As soon as I picked up Super Mario Party I had my friends join me, with only a little bit of pushing, for some good ol’ fun with all of our favourite Mario universe characters.

This time around in Super Mario Party our beloved heroes are competing to find out who is the ultimate Super Star. By playing through all five different game modes, the players’ ultimate goal is to collect all five gems before they’re crowned the best of the best. You’ve got a few different offline options to choose from: classic Mario Party, Partner Party, River Survival, Sound Stage and Challenge Mode.

In classic Mario Party, four players jump around a gameboard with mini-games after each round, collecting coins used to purchase stars. The person with the most stars at the end wins. There’s also River Survival, where four players rush down a dangerous river racing against the clock trying to get to the very end before time runs out. Along with those two modes there is also Partner Party, where you play in teams of two versus two; Sound Stage where you play rhythm-based mini-games to reach your goal; and finally Challenge Mode, where solo players test their skills at Super Mario Party’s mini-games. 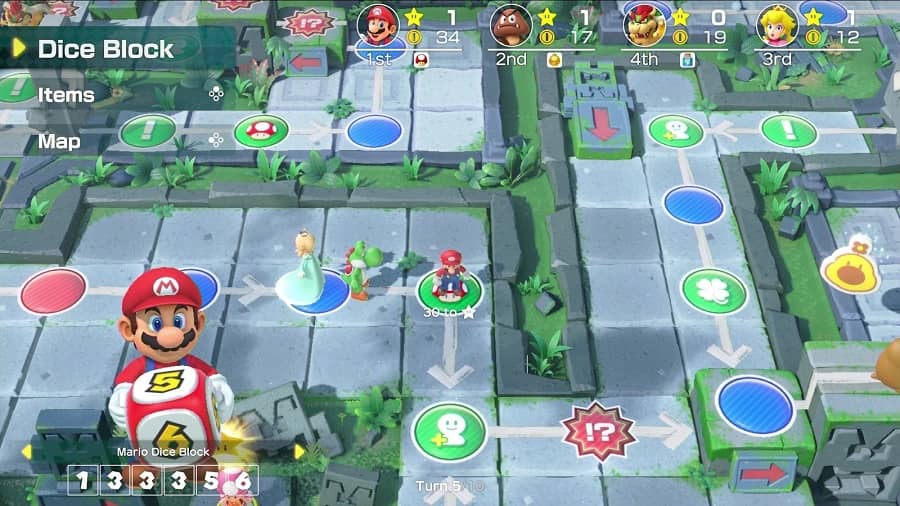 Players will feel right at home when they start up classic Mario Party. You have four boards to choose from: Whomp’s Domino Ruins, King Bob-omb’s Powderkeg Mine, Megafruit Paradise, and Kamek’s Tantalizing Tower. Kamek’s Tower is locked when you first start up the game, but it isn’t too difficult to get your hands on – most players will unlock it not long after playing through the game. Each map is unique, but there’s not too much difference between them other than aesthetics.

There are quite a few new changes to this edition of the series, including character-specific dice blocks. For example, Peach’s die is made up of one zero, one two, three fours, and one six. Since each characters’ die is different, it means there’s some strategy involved to choosing your character at the beginning.

So far, I like Rosalina’s die the best because she has two faces where the player can roll to get a few extra coins, and the rest of her faces are the numbers 2, 3, 4, and 8. This gives the player an advantage at times – they can either get coins or there’s a chance you could roll an 8, a high number that will get you around the board quickly. Sure, there’s more of a chance you’ll get a lower number, but the opportunity for coins or a high roll can change the game significantly. 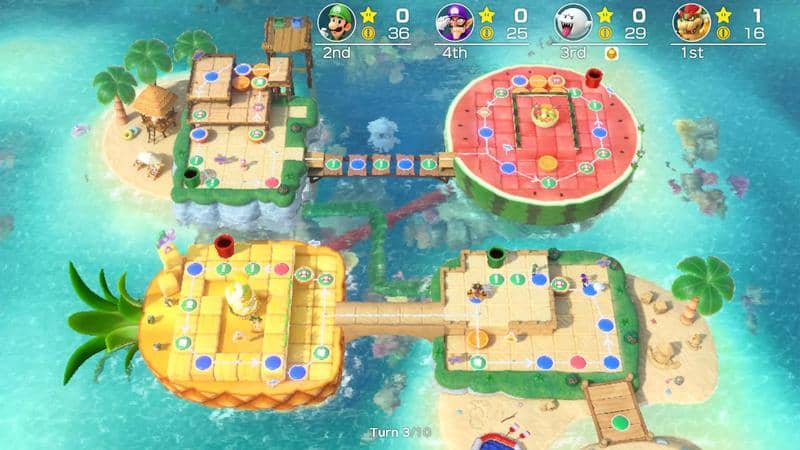 Another new feature to Super Mario Party is the addition of allies. As you’re moving across the Mario Party or Partner Party boards, you’ll have the ability to pick up allies to help you. If you come across Peach on the game board, for example, she will join the party and you’ll be able to choose Peach’s dice to roll as along with your own character specific die. An ally will also roll a die to give extra movement when you go to roll your dice every round. From what I’ve been able to tell, you can pick up as many allies as you can throughout the game. I haven’t noticed allies replacing each other when you have too many, but the most I’ve had so far is four.

After all four players have rolled their dice and moved around the game board, there’s always a mini-game which will give players a chance to earn a few extra coins to go towards those stars. There are 80 mini games to choose from, but you’re given them randomly in Mario Party Mode. If you play Minigame mode, available to choose in the main menu, you can select which mini-games you’d like to play.

Of the 80 available games, almost half of them rely solely on the rumble and motion controls which are specific to Nintendo Joy-Cons. It was a little disappointing to hear that you can’t use a Pro Controller or play in docked mode, but it is understandable considering the amount of games that rely on it. And the controls work extremely well. The addition of mini-games that you can play between two Switch consoles is an innovative choice, but each Switch owner must also have a copy of the game, making the likelihood of most players getting to play those games pretty slim. 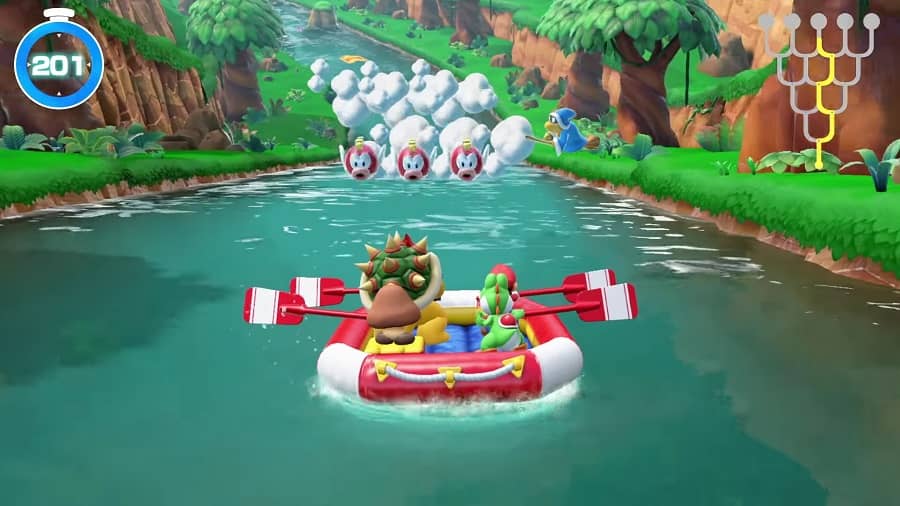 As always, Super Mario Party also includes a way for you to play in teams. The 2v2 mode, Partner Party, uses the same maps but movement around the board plays a little differently. Here, players roll their dice at the same time and combine the numbers together to get their team’s movement number. However, a team must move exactly the number rolled. You can’t simply roll a high number to get quickly over to Toadette who will be holding the star; you have to precisely end your turn on the right spot. It means you’ll likely spend a fair bit of time going backwards, or taking multiple turns before you get where you need to be. It makes Partner Party particularly infuriating.

The final significant game mode in Super Mario Party is Challenge Mode, a single-player mode that allows you to play through every mini-game. The catch is, however, that you have a certain handicap each time you play. Challenge Mode is a great addition to the game for players who might not always be able to play the game with friends. Solo players also have the option of playing Super Mario Party online, but currently there are only ten available games to play on a rotating basis. With Nintendo not indicating future updates for this just yet, it might be better to just force – I mean, invite – real life friends to play with you for now.

There’s no question that Super Mario Party has something for everyone to enjoy. The maps may feel a little smaller than previous titles, but they’re unique and enjoyable in their own ways. Plus, it opens up Super Mario Party for some possible map DLC in the future. Wink, wink, Nintendo! With plenty of game modes to choose from, you’re never stuck doing the same thing over and over, and the addition of fun characters like Goomba, Monty Mole and Hammer Bro as well as the elusive Diddy Kong is a welcome bonus. Super Mario Party manages to perfectly blend nostalgia with brand new gameplay, and no party’s going to be complete without it. 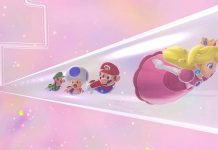