In memory of the brilliant work that the people of Telltale Games have done over the years, we’re taking a look back over our five favourite games from the storytelling masters.

When I first picked up Batman: The Telltale Series, I was apprehensive. I knew next to nothing about the characters or the lore so I was sure that it would be a forgettable one. Boy, was I wrong. Telltale’s Batman series is well-written, immersive, and downright cool. Players get to play as Batman, beating up bad guys and taking down supervillains as well as Bruce Wayne, taking on the backlash of bad rumours being spread about his deceased parents and battling through emotional conflict with his best friend Harvey Dent.

By the end of the series I was rooting for the masked vigilante 100% as were many other players who came back for the second season, The Enemy Within, a year later. 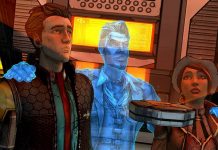 The Delisted Tales from the Borderlands Is Getting a Re-Release