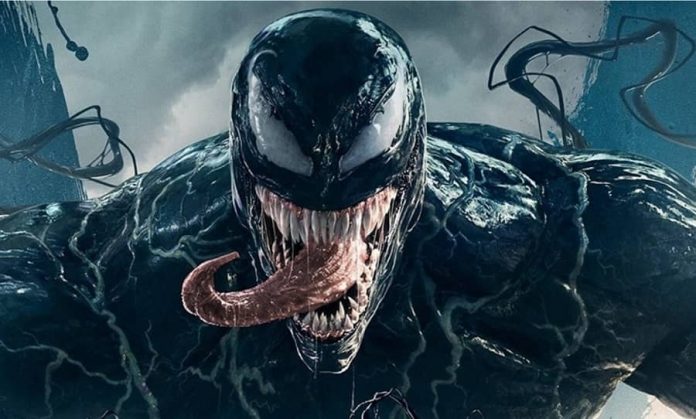 Venom is full of (almost) carnage.

Tom Hardy plays the titular anti-hero and alter ego to Eddie Brock. Under the direction of Ruben Fleischer, Hardy plays his part well, and he’s not the only one. Venom has an all-star cast, including Michelle Williams, Riz Ahmed, and Jenny Slate. With such an ensemble crew, I had high expectations – but Venom often feels like it lacks the depth of character development and solid script.

When a rocket owned by the Life Foundation crashes, reporter Eddie Brock is sure there is more going on behind closed doors besides a lawsuit. A group of Symbiotes is retrieved from the wreckage, and the mysterious owner of the Life Foundation, Carlton Drake, plans to do more than simple experiments with the organisms. And Drake (Riz Ahmed) has a new subject to study when the Symbiote successfully integrates with Brock.

Venom’s CGI seriously lets the film down in places, never comparing to the cast themselves. On more than one occasion, the poor rendering pulls the viewer straight out of the movie. While a Sony production, Venom is visually more lacklustre than one would have expected from a movie with the name “Marvel” attached to it. Any wide shot of the Venom Symbiote looks more comical than menacing because of the proportions of its body.

This does not necessarily mean that the movie is entirely bad. The script does have some strong points now and again, with quips between Eddie Brock and his Symbiote being frequent highlights. And there’s no denying that it’s fun to analyse the language used between Eddie and the exceptionally played Elon Musk-type character, Carlton Drake.

Ultimately, Venom does have its comedic moments – though not all of them are for the right reasons. Tom Hardy’s quips just aren’t enough to make up for a plot that leaves the viewer wanting more. A more interesting fight sequence towards the end – or providing more information about the background characters’ lives could have pushed the plot that much further. The script made some attempt to make the viewer care about the characters caught in the crossfire (I definitely did), but by the end they were all but forgotten. Most secondary characters were simply not given the development needed to make the viewer feel much emotion towards them. When even the main characters don’t give them much thought, how can the audience be expected to?

Venom wrestles with big expectations, and it falls a bit short. See it to be entertained, but not to be impressed.