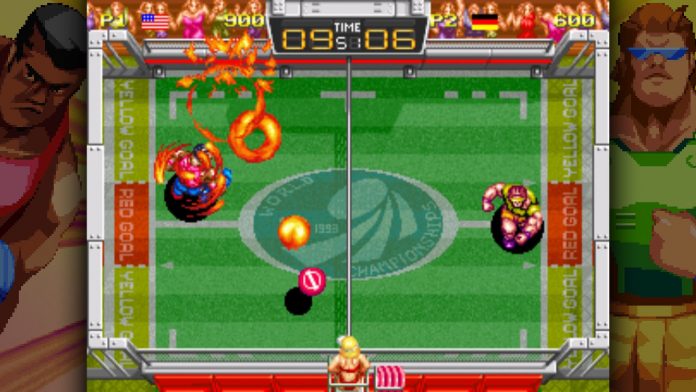 There’s no denying that when you first load up Windjammers you’ll be hit with a fresh waft of nostalgia. My nostalgia smells like Hot Topic and chocolate-scented Axe body spray. Point being, it’s a blast from the past.

Windjammers started out life on the NeoGeo arcade system back in 1994. Since then it’s been brought back to life on the Wii Virtual Console, and more recently, on PS4 and PlayStation Vita thanks to masters of the retro revival, DotEmu. And now, it’s available on Nintendo Switch too.

If you’re not familiar with Windjammers, here’s a refresher: you play as six totally ripped characters that are masters at tossing a flying disc over a net. Your goal is to get the disc to fly past your opponent into their goal while your opponent tries to do the same to you.

There aren’t many buttons to press, utilising only ‘a’ and ‘b,’ but the strategy that you’re forced to use makes the formula pretty brilliant. You can sprint back and forth to catch the disc and keep it from getting into your goal, but you can also use certain button configurations to allow the disc bounce back and forth making it difficult for your opponent to tell where it will land. Along with this you’re able to use a boost to throw the disc at lightning speed towards the goal.

If you are having a hard time with the game, Windjammers is equipped with a helpful tutorial that walks you through all of your available moves. I had a difficult time getting used to it at first, but once you realise all of the different things you can do to take your opponent by surprise, the game gets much more exciting and fun. The beachy theme will have you wanting to slather on some sunscreen and squeeze into your bathing suit and the music will make you dance until you drop.

Pong meets Wii Tennis in this fun and exciting retro game out now on Nintendo Switch. Available for £13.49/$14.99, it’ll at least get us in the mood for when Windjammers 2 releases next year.