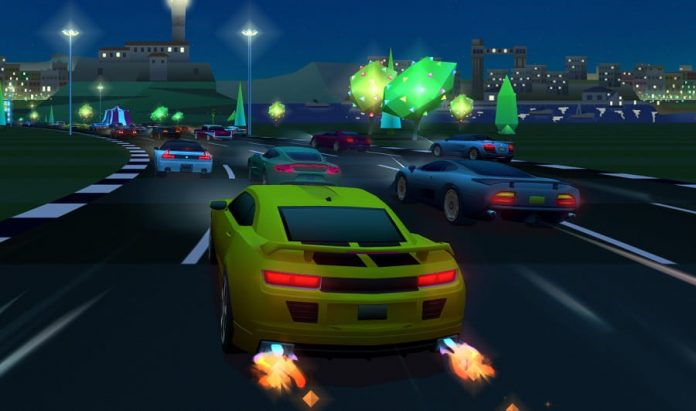 I used to love Out Run.

As a youngster, every time I even got a whiff of a nearby arcade, I was there, looking for the Out Run cabinet. It’s a habit that didn’t stop even after coming into the possession of a SEGA Master System, and then a Mega Drive. I couldn’t play Out Run with a steering wheel on those formats, after all. But then eventually, as games became more advanced, my urge to revisit Out Run fell off a cliff.

But every once in a while, a wave of nostalgia blows over me. Spurred on by its inclusion in a recent Yakuza game, I even tried Out Run again not too long ago. Like a lot of games I remember from close to thirty years ago though, time hasn’t been kind to it. While its music still gets my foot tapping, its visuals and gameplay haven’t aged all that well. And I guess that’s why Horizon Chase Turbo exists – a game that is both modern yet retro in terms of both visuals and gameplay, undoubtedly influenced by titles such as Out Run.

Unlike Out Run, Horizon Chase Turbo doesn’t require you to race from one point to another against the clock; its races are circuit based. Its World Tour mode has you visiting 12 different locations around the world, competing in races to earn points and collect trophies. And as you go, you unlock a wide variety of cars that can be upgraded by completing special events. Yet despite its modern day structure and features, its gameplay is unashamedly retro. 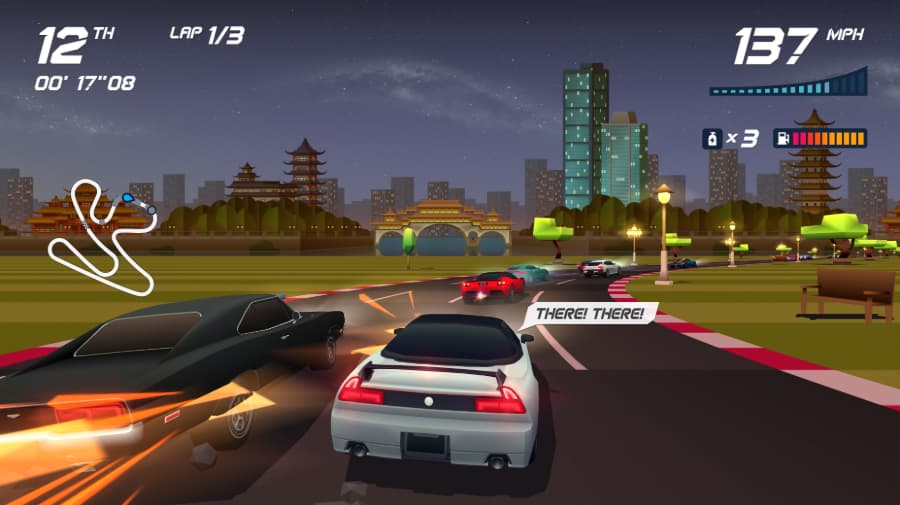 You don’t feel so much feel like you’re driving a car in Horizon Chase Turbo; rather, the world is simply scrolling past you. Also, like classic games such as Out Run, you have limited control of your movement. You’re in charge of acceleration and braking, but cornering is just something you assist with. Fail to move the analogue stick in a direction as a corner approaches and your car will still turn into it, though perhaps not quite enough to avoid a trackside obstacle if there is one.

It’s this element of Horizon Chase Turbo that will perhaps be the most divisive. On the one hand, it’s a nice throwback to games of a bygone era. On the other, after years of playing racing games where you are fully in control, it feels alien and somewhat restrictive. There’s also the issue of its bouncy collisions, too. With 20 competitors battling for positions in each race, the first few corners can be infuriating as cars bounce off each other like pinballs. And it’s an issue that only gets worse as the cars get faster and the tracks more windy. 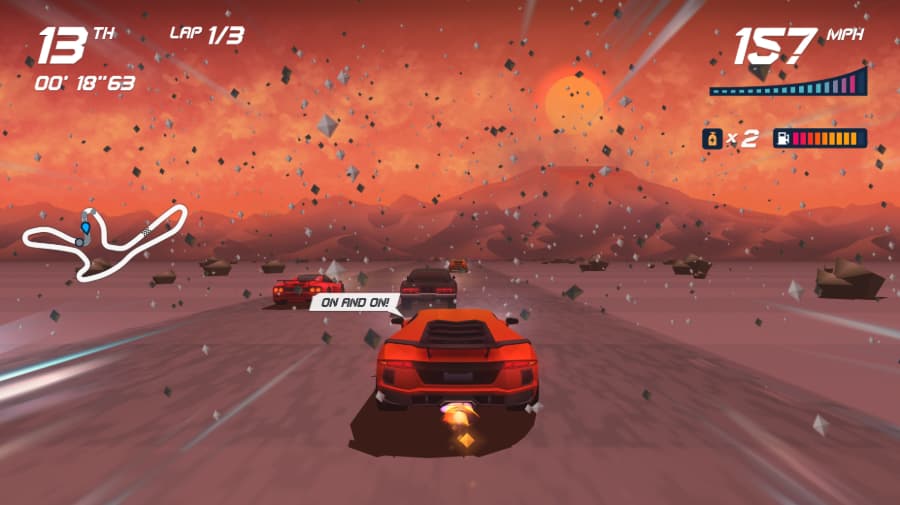 Even if you do occasionally get mad at Horizon Chase Turbo though, you’re likely to return to it again and again thanks to its pick-up-and-play nature. Its races never last more than a few minutes each, and World Tour mode also provides you with the additional challenge of collecting coins nefariously placed on each track. There’s also the matter of limited fuel to contend with, too. It’s challenging, but never so much so that it becomes truly off-putting. Every time you fail, you just dust yourself off and strive to do better next time.

In addition to World Tour mode, Horizon Chase Turbo also boasts a tournament mode to unlock, as well as Playground and Endurance modes. You won’t be playing the latter until you’ve spent many hours with Horizon Chase Turbo though. Tournament mode allows you to take on groups of races spread across three difficulty categories, while Endurance mode throws you into a never-ending cavalcade of races until you fail to finish 5th or higher. Playground mode is the new to the Xbox One and Switch versions of Horizon Chase Turbo, and provides a selection of five events with random conditions that will change periodically. 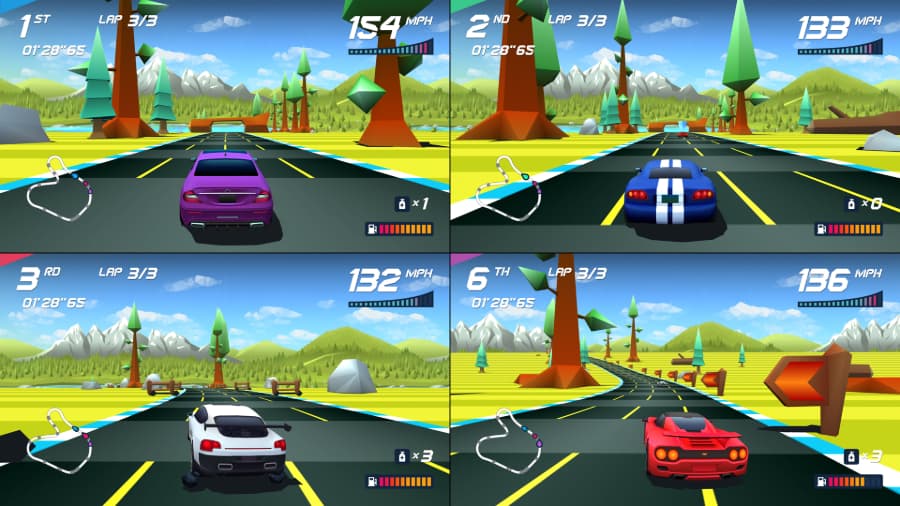 No doubt one of Horizon Chase Turbo‘s best features is that it supports 4 player split-screen gameplay, allowing you to enjoy everything it has to offer with friends. Unless you’ve got a big TV, you might struggle to make out some cars or obstacles at a distance, but it certainly adds a layer of riotous fun to the experience. If your friends are good at the game, it adds yet more challenge, too. Although you probably won’t be needing any more of it once you’ve progressed far into World Tour mode.

Ultimately, Horizon Chase Turbo‘s repetitive nature means that it’s a game better enjoyed little but often. Chances are you won’t find yourself enjoying it for more than an hour or so at a time, but you’ll want to revisit it each day for a race or two. It blends both old and new game mechanics rather well, but the result is still a game that feels arcade focused; sometimes unfairly challenging, but yet alluringly replayable. Though there are two things that always remain a massive draw: its beautifully bold visuals, and its wonderfully retro soundtrack.

It’s far away from being perfect, but Horizon Chase Turbo is one hell of a stylish way to waste 30 minutes of your day.

Horizon Chase Turbo is available on PS4, Xbox One, Switch and PC. We reviewed the Xbox One version. 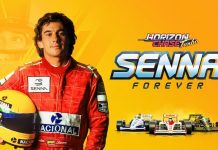