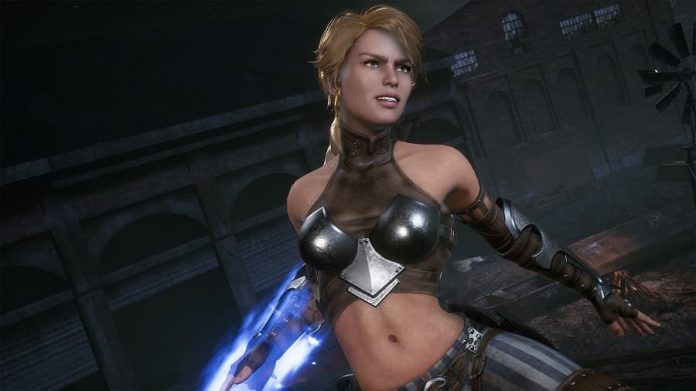 The latest Mortal Kombat had the likes of Leatherface added to it as DLC, sure, and I guess there’s also the Darkstalkers series, but there hasn’t been a new one of those for over ten years now. Basically, if you want to pit a vampire against a werewolf or an Egyptian mummy against Frankenstein these days you’re generally out of luck. Well, until now. Thanks to Omen of Sorrow you can finally create those very match ups. Whether or not you should, however, depends on how much you’re prepared to pay for it.

Exclusively available on PS4, Omen of Sorrow feels very old fashioned. Remember when fighting games were at the height of their success and there was seemingly a new one released every month? Omen of Sorrow feels like a product of those times. Although it sure does look a lot nicer. Rendered in 3D, character models are detailed and have a lot of… well, character. They’re only let down by some stilted animations. The game’s environments are also rather detailed too, although there’s never anything interesting going on in the background. But then does that really matter? The combat is the real focus, and while it isn’t going to wow you, it is fairly entertaining.

Despite Omen of Sorrow‘s visuals being rendered in 3D, the gameplay is strictly kept on the 2D plane. It essentially plays like an old 2D fighting game, or at least on the face of it, with you having access to light and heavy punches, light and heavy kicks, throws, and a range of special moves. Think Street Fighter and you’re about there. You can even power up your special moves by expending some of your special meter, or save it so that you can perform highly destructive super attacks. Dig no deeper than that and you could mistake Omen of Sorrow for being dreadfully basic. When you start figuring out the game’s Fate/Fortune system, however, you discover that it does have some depth. 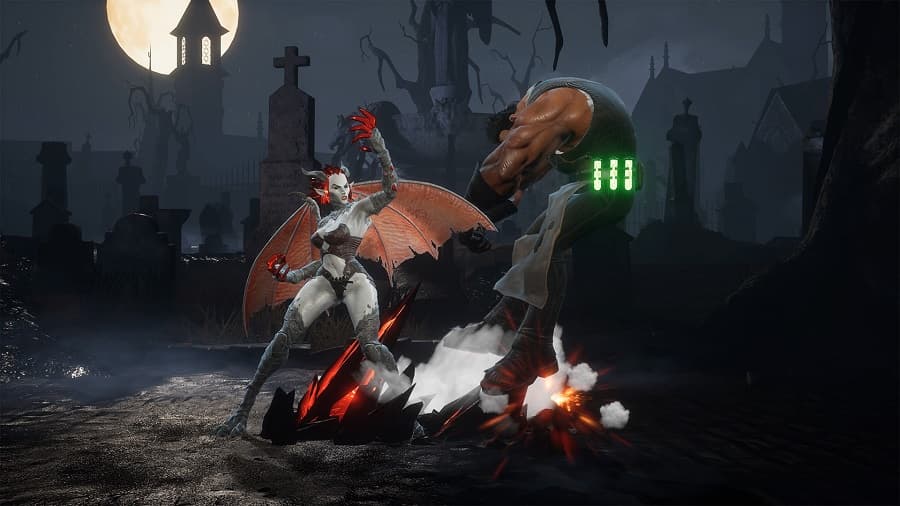 Rewarding those who take the fight to their opponent, effective manipulation of Omen of Sorrow‘s Fate/Fortune system can really affect the outcome of battle. It determines if you have access to a counter move after blocking, for example, the speed at which you recover a limited portion of your health, and even if you have access to a special “Blessed” state which increases your damage and grants you more free-form combo opportunities. It rewards those who get stuck in – even more so if they’re successful with their attacks – while punishing those who play defensively or try to avoid combat altogether.

Even with its Fate/Fortune system though, Omen of Sorrow still feels old-fashioned and quite basic. Though that doesn’t mean it isn’t fun. Battles are won with sneaky leg sweeps and well-timed light punches rather than grand 10-hit plus combos and aerial assaults, and in some ways it makes a refreshing change. The game’s unusual roster of fighters helps too, even if there aren’t that many of them. There are nine horrific pugilists available from the outset, with another couple to unlock. Most are fairly conventional to play with such as the mysterious Gabriel, who anyone who mains Ryu will feel right at home with. A few are less so, however, including Radegonda who can fly around the screen at will, and Imhotep who instead of jumping simply dislodges the upper part of his body which can then be moved independently to strike from a distance. 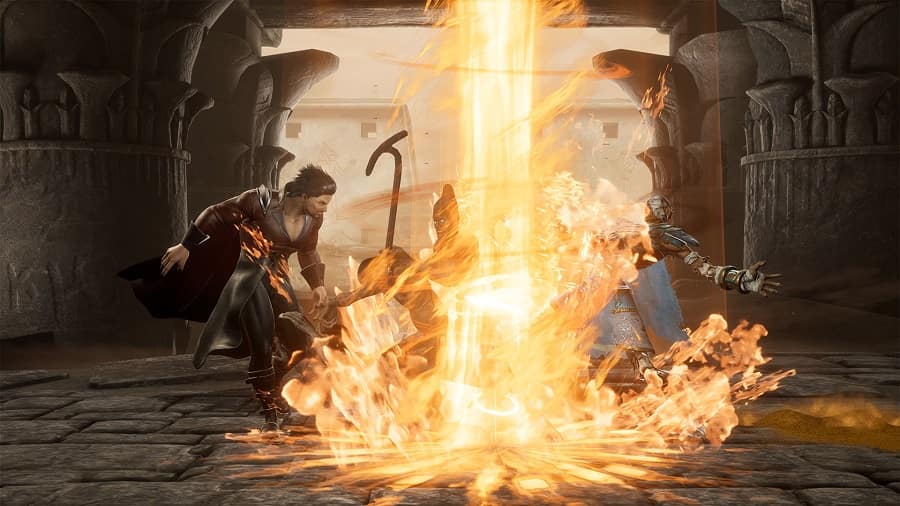 On the mode front, Omen of Sorrow has everything you’d expect; Arcade, Versus, Training, Survival, they’re all here. You can also take the action online to play casual and ranked matches, and both seem to work well providing you can find an opponent – there aren’t many people playing it at the moment. Surprisingly, the game also features a story mode which is split into three parts, each based around a small group of the game’s roster of fighters. Unfortunately it’s a bit of a dud though; the story just isn’t interesting at all, and is presented in a really dull manner. You’ll sit reading text boxes for the most part as characters stand on the screen, with bouts of combat thankfully breaking up the tedium. If you want to unlock all of the items in the game’s Gallery though, you’ll have to persist with it.

All things considered, Omen of Sorrow is a very competent fighting game. It just doesn’t have the same level of polish that so many others have. And there’s the problem: for its current retail price of £44.99/$49.99, you’d expect more. Shave a third off that price and you’d probably feel quite happy with your purchase, especially if you’re a fan of quirky fighting games. At its current price though, its small roster of fighters, stilted animations and lacklustre story mode will having you wishing you’d saved your money, especially when you try to take the action online and can’t find any opponents. Omen of Sorrow isn’t a bad game by any means. In fact, it’s probably better than you expect it to be. It’s just not good enough to warrant a full price purchase.

Omen of Sorrow is available on PS4.