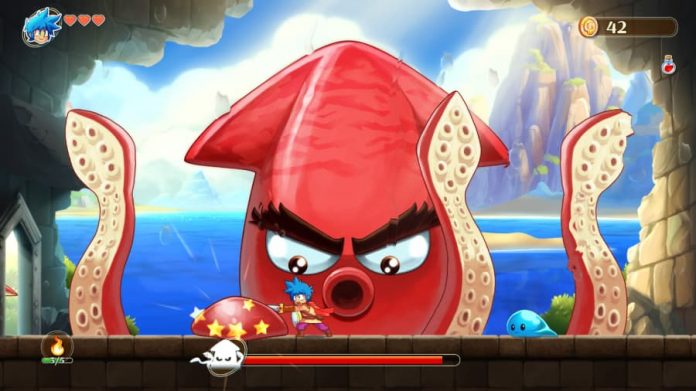 Monster Boy and the Cursed Kingdom could have been a masterpiece.

Borrowing ideas and mechanics from a legion of 2D platforming classics, it presents players with a charming adventure that is likely to consume 20 or so hours of their lives. But that’s if they stick with it. And there are a few reasons why they wouldn’t.

In Monster Boy and the Cursed Kingdom, you find yourself in control of Jin. His uncle has apparently gone mad and is changing the inhabitants of the Monster World Kingdom into forms that aren’t all that helpful. And so Jin heads out to put a stop to his uncle’s trouble-making.

Jin’s adventure has only just begun when he himself gets transformed. As a pot-bellied pig, he can no longer make use of his helpful equipment, but he can slam to ground to make a great impact, and smell things out with his snout. You have to find the positives, don’t you? And that’s the first of many forms you’ll discover for the young hero on his quest; the others being drip-fed to you as you defeat some of the game’s truly fiendish bosses.

When Monster Boy and the Cursed Kingdom is in its stride, it is absolutely phenomenal. It isn’t quite what I’d call a Metroidvania, but its sprawling, open map hides many secrets, tempting you to revisit areas to grab previously inaccessible goodies. On top of that, its visuals are simply gorgeous, oozing colour and charisma in every single frame, and its controls are beautifully responsive and reliable. 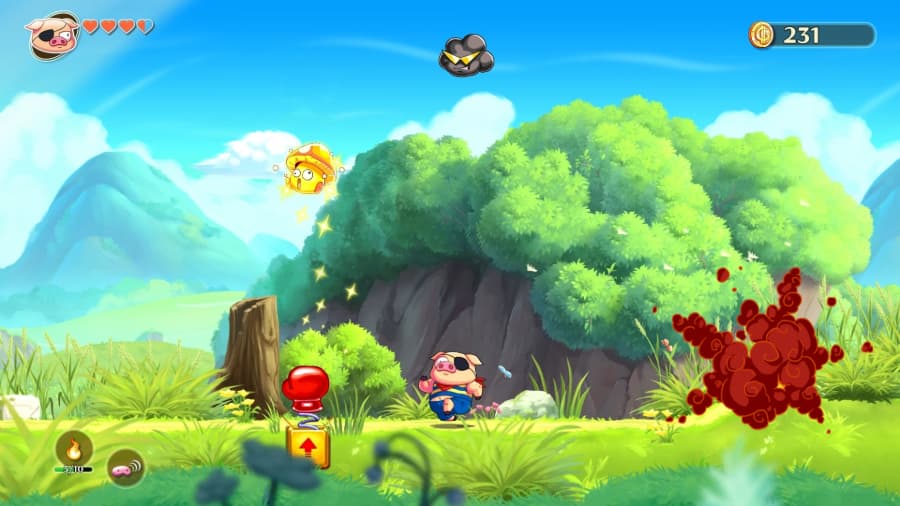 When you’re not running and jumping on platforms, you might find yourself pummelling enemies with your trotters, tail or an equipped weapon depending on your current form, and often you’ll have a range of magic available to you, too. Breaking up the platforming action is an abundance of puzzles – sometimes simple, often less so – changing the pace of the game and giving you something to think about. It all makes for an enjoyable mix that feels old school, but the crisp visuals always remind you that you’re playing a new game released in 2018.

Of course, one of the highlights of Monster Boy and the Cursed Kingdom is its range of bosses. Like all great platforming game bosses, you’ll need to study and learn their attacks, and move through multiple boss fight stages to emerge victorious. Sometimes they’ll feel more like puzzles than fights, and that’s not a bad thing. Although you’ll rue the time you spent scratching your head, wondering what you needed to do until it just clicked.

Some depth is granted to the game by an equipment upgrade system, allowing you to eke extra helpful bonuses out of your gear should you find the gems required to do so. You can make it so that you’re immune to poison while wearing a certain piece of armour, for example, or allow yourself to freeze fire enemies and projectiles by upgrading your ice sword. You’ll never get to a point where you feel overpowered, but you can make your adventure much easier by carefully selecting which upgrades you unlock. Or you can scour every nook and cranny in the world to get enough gems to upgrade everything. It’s up to you. 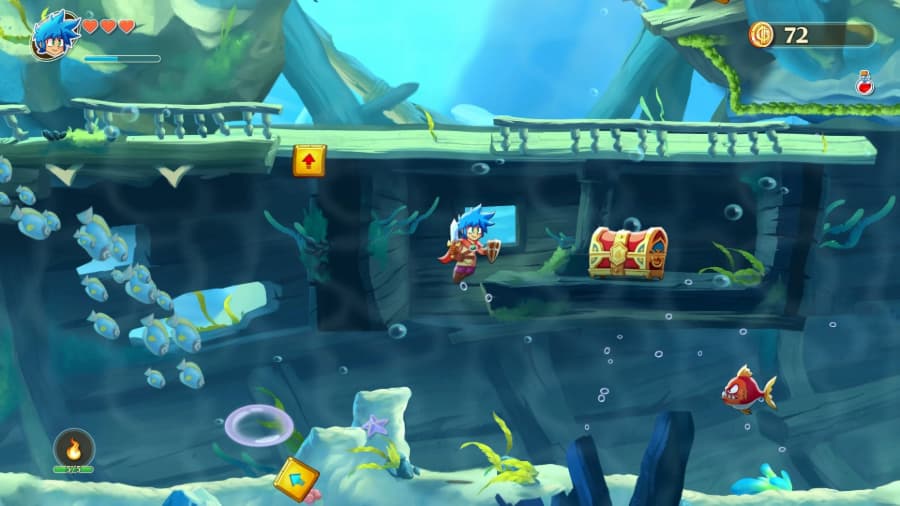 You’re likely going to want every advantage you can get while playing Monster Boy and the Cursed Kingdom though, as its difficulty could well and truly have you rage-quitting. But I’m not just talking about a general level of difficulty; Monster Boy and the Cursed Kingdom‘s moment-to-moment gameplay is hard, but not excessively so for the most part. It’s the game’s systems and a lack of direction at times that compounds it.

Monster Boy and the Cursed Kingdom‘s checkpointing is woefully inconsistent, sometimes taking you back multiple screens when you’re struggling in a troublesome area. And if you do die, you’ll often find yourself respawned with just a few of your health hearts restored, which can be swept away in little more than one attack or environmental hazard. And there’s no way for you to manually refill your health in the majority of circumstances, either. It means that if you previously struggled to complete what’s ahead with maybe eight or nine hearts, you’re going to have to really get good to manage it with just three. 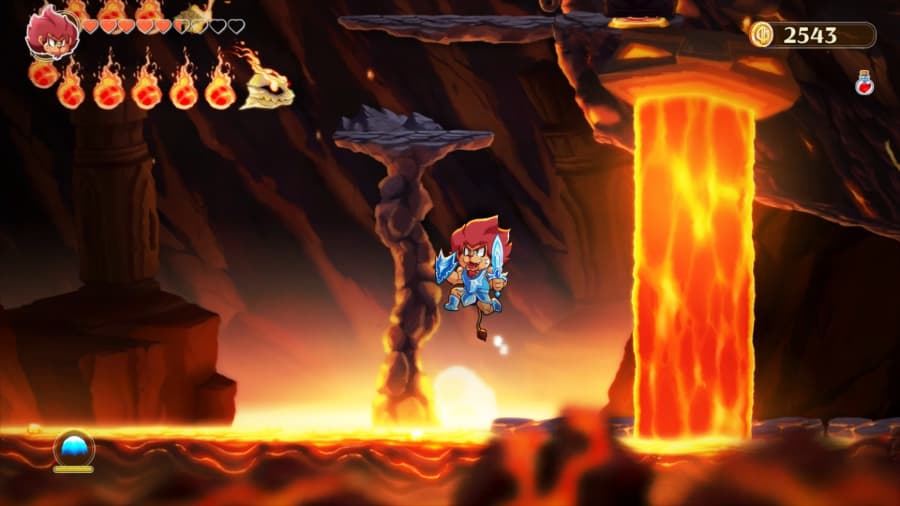 You do obtain a handy weapon/tool at some point that allows you to warp back to town to replenish your supply of magic and health, but it’s an unnecessary faff that you shouldn’t have to deal with – and you won’t want to with how often you might find yourself in dire straits towards the end of the game. If only Monster Boy and the Cursed Kingdom‘s checkpointing was more consistent and meaningfully placed, and its health system a little more lenient, it would be a lot less frustrating.

As mentioned, a lack of direction is also a problem at times. At one or two points in the game you might not have the foggiest idea where to go, and the target on your map showing your next destination won’t be a help at all. In those situations, you might find yourself searching high and low for a door that you haven’t been through yet, or an obstacle that you can now overcome thanks to your increased repertoire of abilities. On a couple of occasions the game will fail to use its telltale signs of a character’s usable abilities, too, possibly leaving you doggedly searching through a number of rooms, slowly losing your sanity until you discover the answer to your halted progression.

I’ve encountered numerous. numerous glitches in my time spent with the Xbox One version of Monster Boy and the Cursed Kingdom, also. Each time I had to quit to the dashboard and reload the game. Thankfully I never lost too much progress, and hopefully they’ll be patched out if they haven’t already been. 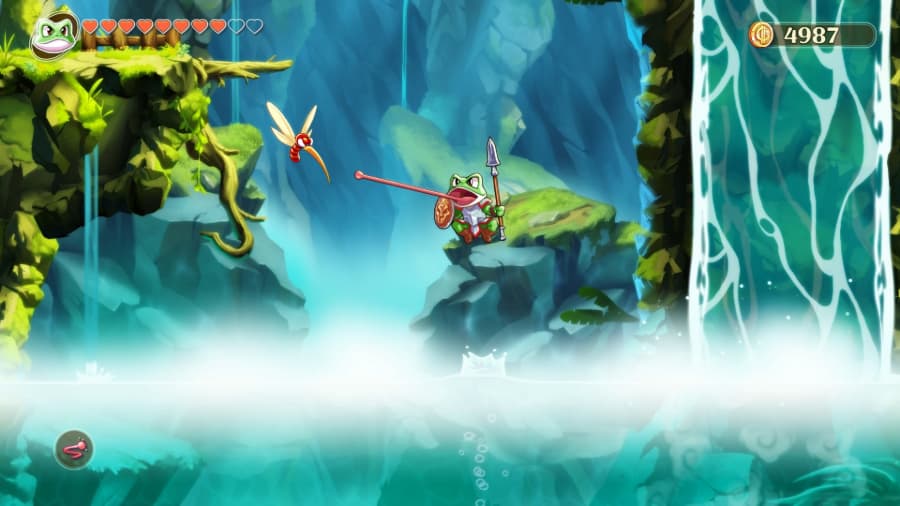 At times, Monster Boy and the Cursed Kingdom is a real delight. The kind of experience that you cherish and fondly remember for years. But too many times I’ve found myself gritting my teeth because I’ve found an area where progression relies more on trial and error than skill, and failing takes me back multiple screens. I can live with the game being challenging – overcoming the game’s bosses and puzzles gives you a real sense of achievement and pride – but too often the difficulty feels artificial, or as a result of the game’s systems not really working together in unison.

The result is that some people will absolutely love Monster Boy and the Cursed Kingdom, and others will be enraged by it. I sit somewhere in the middle – I really like it, but its flaws have soured my experience with it. For those with a great deal of patience looking for a challenging 2D platformer with huge amounts of character, Monster Boy and the Cursed Kingdom is great. For everyone else, it’s likely to be frustrating just as often as it is fun, severely putting a dampener on the whole affair.

Monster Boy and the Cursed Kingdom is available on PS4, Xbox One and Switch. We reviewed the Xbox One version.