Imagine a beat-em-up where colossal beings battle it out for global supremacy, a game where your punches feel like you could knock Cthulhu out cold. Imagine the unparalleled sense of power you’d feel every time you picked up the joypad!

Override: Mech City Brawl, however, is not that game. Despite putting you in the shiny shoes of 12 metallic titans, the fighters in Override lack a sense of scale. In this respect it’s true to the giant monster movies it seeks to ape, where the combatants were people in rubber suits, battling it out on shrunken down sets.  Going into it, I expected to be convinced that I really was duking it out with Godzilla’s non-copyright infringing cousins, the Earth shaking as we fought. Instead, Override: Mech City Brawl feels like a wrestling game with a Pacific Rim-style twist.

But get over that mental hurdle and you’ll discover that Override: Mech City Brawl has a lot to offer. The game sports a story mode and while it’s worth dipping into to check out the superb enemy designs, annihilating wave after waves of enemies with the same set of moves gets a little dull. Instead, the real mecha-meat of Override: Mech City Brawl is the versus mode where you pit your robot against other mechanical menaces.

There’s no actual grappling in Override, but it’s still a reasonably technical brawler, along the likes of WWE 2K19 and other fighters where button mashing doesn’t guarantee you victory. Instead of executing combos, you’ll be watching your opponent’s moves, blocking and countering (hopefully) at just the right moment. Each of your monster’s limbs is mapped to a specific attack button; holding them down delivers a stronger assault though it leaves you open, particularly if your opponent is able to blast past you. 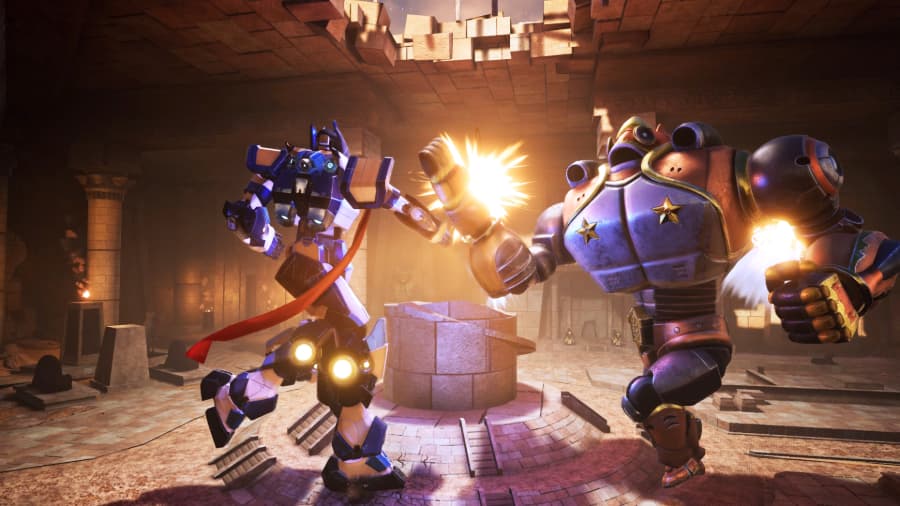 Each fighter has their own strengths and weaknesses, as you might expect, but they’re all pleasingly balanced. There’s no one character who can obliterate the others, though it’s up to you to learn how best to make use of their skills. Venturing online, I chose a more dainty robot and was was soundly thrashed by another player whose character was basically MechaGodzilla.

The defeats continued until I learnt how to stay back and use her speed and special attacks to my advantage, finally making her a formidable fighter. Matches in Override: Mech City Brawl run on for five minutes rather than ninety seconds (though the timer can be disabled), for good reason. Combat can be a slow-paced affair, particularly when you’ve got the good sense not to go charging on in. Finally crushing a human opponent, whether over the internet or in the game’s split-screen mode, can be a supremely satisfying experience, knowing you’ve fought hard for your victory.

Pummelling a computer-controlled opponent is also fun, though the game’s AI can be a tad twitchy at times. I was pleased to discover a whole sub-level beneath one of the game’s city-based arenas and waited for them to follow, so after annihilating towers and monuments, we could do a little subterranean smashing. They never came and instead only regained interest when I headed back to the main area.

There is one definite pro to battling computer-controlled fighters and that’s that you’re guaranteed to get a four-player match going. I had absolutely no luck in getting into a four-player match online, but scrapping against one human and two CPU opponents, in true King of the Monsters style, was the one time that it actually felt like I was in a monster movie. 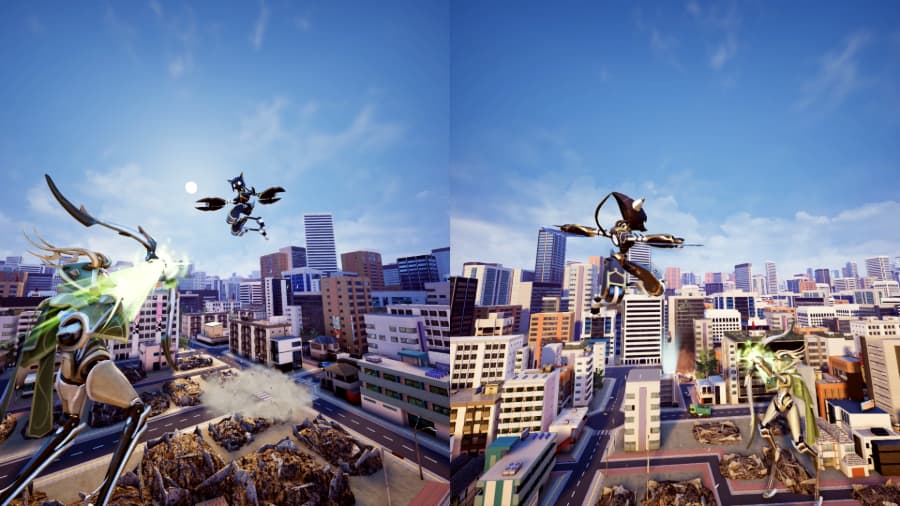 Be warned though, the online portion of Override can be a tad flaky; about a third of the matches I played featured some lag. Another irritation, while it’s not a game-breaker, is that you have to manually lock onto your opponent. The arenas aren’t massive but, especially when you are fighting against multiple opponents, it’s possible to lose sight of them (till they unload their laser-breath in your face, that is).

Override: Mech City Brawl is not likely to become an esports fixture, but it doesn’t seek to and it certainly knows its audience. It’s acutely aware of its own silliness, even giving you the option to unlock (no, there are no microtransactions here) different colours and ridiculous accessories for your foe. Want to fight as a pink pirate hat-wearing Gundam knock-off? Override has you covered. Override: Mech City Brawl may not quite nail the grand sense of scale, and I would certainly have loved to see some more organic monsters added to the roster, but it’s an entertaining little fighter to dip into. And, if you can drag a few friends into battle, it makes for one hell of a fun party game.

Override: Mech City Brawl is available on PC, Xbox One and PS4. We reviewed the Xbox One version.