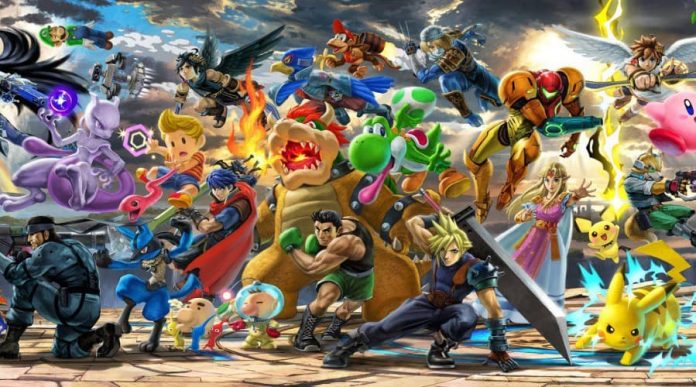 Fighting games are one of the more divisive genres in all of gaming. You either love them or you don’t. Many games have ‘casual’ player bases, but fighting games tend to be comprised mostly of die-hard fans. The grinders. The ladder climbers. Super Smash Bros. has always appeared to me as the open door to anyone looking for a non-traditional fighting experience that still carries the tenacity, energy, and competition of more traditional fighting games. Super Smash Bros. Ultimate truly does feel like an ultimate experience. By building on the strong foundation of the series, seemingly working out the bugs and kinks of past entries, expanding to a massive roster, and adding so many ways to play, Ultimate has set a high bar.

Right off the bat, the first thing I noticed was how fast the game felt. No character, no matter how big or small, felt sluggish. Super Smash Bros. Ultimate sets an electrifying pace to its gameplay that crafts a genuinely fluid and high-energy playing experience. The random critical hits and the quick combos make for exciting moment-to-moment action, where every action you take feels valued. From the solo games to the couch co-op brawls, the gameplay is smooth as silk. Nintendo has always done well when it comes to creating memorable game play moments, but with Smash, it’s more than just the moment that sticks with you. If you put the time in, the game rewards your commitment with items, characters, and amazing moments that happen in the blink of an eye.

For players looking for a fighting game that emphasises speed and aggressiveness, it probably comes as no surprise that Super Smash Bros. Ultimate fits that bill. Sure, you can learn combos and deep mechanics to make you a more efficient player. But Smash has always held that allure of being friendly enough for anyone to jump in, regardless of their experience with fighters in the past. The fact that Smash has always been more of a brawler than a pure fighter has allowed it to be welcomed openly into the arms of so many gamers who shy away from most traditional fighting games. 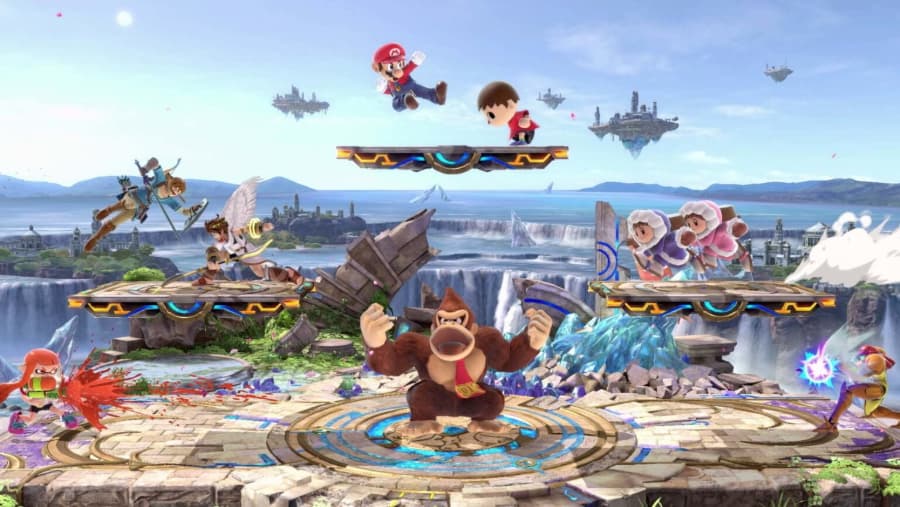 So Many Ways To Play

In the past, loading up Super Smash Bros. generally meant one of two things: couch tournaments or solo grinding. Super Smash Bros. Ultimate busts the door down with some fantastic new ways to enjoy the game. By simultaneously catering to both solo and group play, Nintendo has created a world worth exploring no matter which way you plan to dive into it. Trudge through Classic Mode for that nostalgic feeling. Fire up traditional multiplayer with your friends, or even head online to test your mettle. Or, explore the great new modes of World of Light and Spirit Battles.

World of Light is terrific. Traversing the massive map while unlocking new characters and spirits for your party is a solid RPG-esque adventure that allows for hours upon hours of extended play. The battles have modifiers that can drastically change how the fight goes down, and I’m happy to say that practically anything above the low difficulty is a worthy challenge. Adding more variety to the CPU battles really adds an extra layer of fun and challenge to Super Smash Bros. Ultimate that was never really there in the previous games. On the Spirit Board, in the Spirit Battles mode, you can pick and choose which battles you want to try and which spirits you want to unlock. Allowing players the opportunity to face these challenges outside of the World of Light is a great addition to the game. The single player experience in Super Smash Bros. Ultimate is, without a doubt, the best the series has to offer. 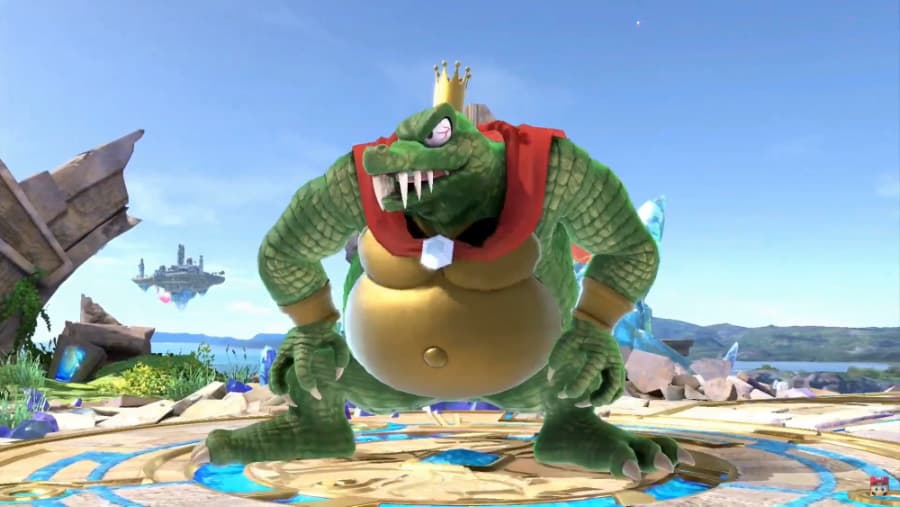 A Character For Everyone

When the game was first being discussed, it didn’t take long for us to hear about the massive roster. And I have to say; it does not disappoint at all. With over 70 characters, and more on the way, there are so many unique and interesting playstyles to learn. Sure, we still have a crap load of Fire Emblem characters and probably more Links than we need, but the roster in Super Smash Bros. Ultimate is as well-rounded as you could hope for. Beyond that, the amount of playable stages is outrageous.

No matter which way you look, the sheer amount of content in this game is breathtaking for a game of its nature. The new characters are, minus a few exceptions (Ken and Isabelle come to mind), spectacular. There will always be some duds in a roster of this size, but the fact that the ratio is this lopsided towards being positive is great news. 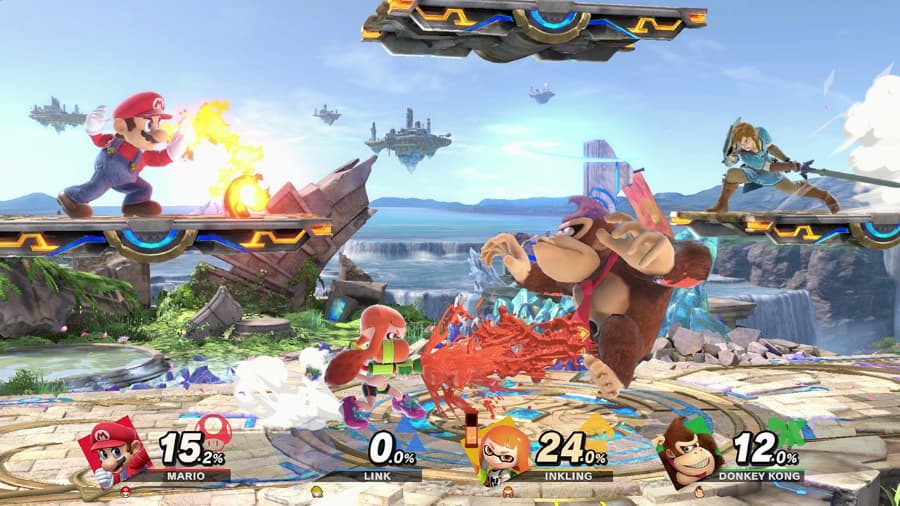 Going off of that, not everyone necessarily feels perfectly balanced. Some characters, like Link, feel more competent than in past entries. Others, like Samus, strangely feel a bit weaker. Newcomers King K. Rool and the Belmont boys are damn strong. Even the larger characters seem to be much more mobile than before, which means those who still retain large amounts of power have become even more fearsome. Does Nintendo need to step in and balance anyone in particular? Not necessarily. But are there some who feel blatantly stronger than others.

With Nintendo, unfortunately, online play is always going to be a gamble. If I wasn’t playing against someone in the same room or within a reasonable distance of my city, matches turned into laggy messes most of the time. Online play is unquestionably better than it was on the Wii U, but there is still work to be done with Nintendo’s online capabilities. But what makes Super Smash Bros. Ultimate so great is that I don’t really care if the online is slow and messy. It’s just damn fun to play.

Super Smash Bros. Ultimate beautifully tows the line of accessibility for casual players and depth for the hardcore fans. One thing I have always loved about Nintendo is its dedication to the art, and to creativity as a whole. Good or bad, I’m always excited to see what comes next from them. As Super Smash Bros. Ultimate grows and the new characters arrive, I’ll be back on the battlefield for another round. When you have something that people want, it’s hard to balance pushing the envelope with maintaining the foundation. Super Smash Bros. Ultimate is a prime example of how you push forward into greater territory without losing what made you great in the first place.