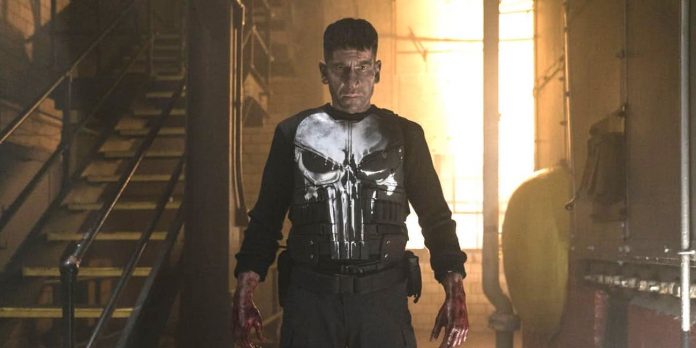 The second series of Marvel’s The Punisher, starring Jon Bernthal as Frank “The Punisher” Castle, has just landed on Netflix.

In comics, he’s been murdering bad guys for over 40 years and has gone up against several of Marvel’s A-List heroes. To celebrate his return to the small screen we decided to round up a few Punisher facts.

1He appeared on the 90s Spider-Man cartoon, but wasn’t allowed to kill anyone.

The Punisher first appeared in The Amazing Spider-Man comic, way back in 1974. However, he also put in an appearance on the 90s animated Spider-Man show, despite the fact that he usually kills his enemies. Naturally, he wasn’t allowed to murder anyone but he was still an odd fit for a children’s show.

2There have been three Punisher movies, none of which received a direct sequel.

Marvel has tried to bring the character to the big screen on three occasions, casting Dolph Lundgren, Thomas Jane and Ray Stevenson as The Punisher. Thomas Jane did express interest in playing the character again, and starred in an unofficial Punisher web-short, but nothing came of it.

3The Punisher may have been seriously unhinged even before his wife died.

The Season 2 trailer for Netflix’s The Punisher suggests that Frank Castle has problems that are nothing to do with his wife’s death and, going by the comics, they could be right. Marvel’s Punisher Max series suggested that, even before he went to war, he had serious psychopathic tendencies.

4The Punisher stole a suit of Iron Man armour.

To avoid being outclassed by his enemies the Punisher has, on several occasions, stolen super-powered weaponry. Most recently he “borrowed” suit of Iron Man armour, previously being used by Jim “War Machine” Rhones.

5The Punisher doesn’t have a rogue’s gallery.

Billy Russo aka Jigsaw was scarred by Frank Castle, giving him a lifelong vendetta against the vigilante. But he’s the only villain who is, more or less, exclusive to the Punisher. Unlike Spider-Man, he doesn’t have a rogues gallery and will instead tangle with anyone who gets in his way.

6The Punisher was kicked out of Heaven.

After committing suicide, the Punisher became an angelic assassin, complete with supernatural powers. However, his stint as Heaven’s heavy hitter didn’t last long and, shortly before Garth Ennis’s Punisher run, he was booted back to Earth for ruffling too many feathers.

7The Punisher was once a Frankenstein.

Yes, we know Frankenstein is the scientist, not the monster, but given the series in question was called Frankencastle, we’re sticking with it. This odd turn of events happened after Frank was murdered by Wolverine’s son, in retaliation for trying to kill Norman Osborn. He was then stitched back together by a group of monsters, who needed his help to win their own war.

8There have been six Punisher games.

There have been six Punisher games, across various formats, including a scrolling arcade game where the second player was Nick Fury. Thomas Jane, star of 2004’s The Punisher voiced the character in the 2005 game of the same name. The latter game featured a number of violent executions but they were censored in-game and could only be seen in all their gruesome glory by using an unofficial patch.

9The Punisher had a gun that fired swords.

The mainstream Punisher series has always been faintly ridiculous – but Frank Castle once got his hand on a gun that fired swords. As cool, and as baffling as it was, we never really got to see the weapon used against his enemies.

10The Punisher murdered Spider-Man and the rest of the Marvel Universe.

Garth Ennis, never a fan of superheroes at the best of times, penned a one-shot comic called “The Punisher Kills the Marvel Universe”. In it, having lost his family in a superhero brawl, determined all superhumans were a threat. After killing Spider-Man and Venom he went on to successfully slaughter the remaining Marvel heroes and villains. Don’t you just love a happy ending?