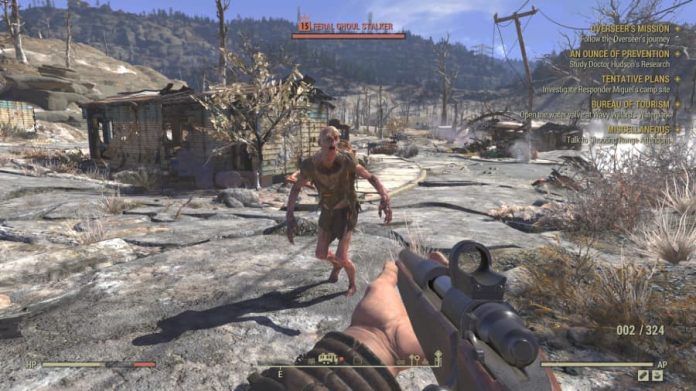 There’s no doubt that Fallout 76 has had a rocky time of it since launch.

We gave it a 2/10 ourselves, stating “There’s nothing I can say that’s fun or exciting about Fallout 76”. Then there was that whole fiasco with the canvas bags, and then Bethesda accidentally revealing the personal information of some Fallout 76 players.

So, it’s perhaps natural that when a YouTuber named TheQuartering began speculating that Fallout 76 might be going free-to-play based on stock shortages at Australian retailer EB Games, there was frenzied debate on Reddit. In the description for the video, the TheQuartering claims that, “Someone reached out to me from EB Games in Australia and mentioned the game was likely to go free to play.”

So, really, this story always had the distinct whiff of BS/shameless self promotion: one guy notices a stock shortage and makes a 2+2=5 conclusion, backing it up with more speculation from someone who supposedly works for a games retailer.

Thankfully, someone sensible simply asked Bethesda directly on Twitter, who straightforwardly replied “there is no truth to this rumour”.

There is no truth to this rumor.

Rather sweetly, the questioner insisted in the comments that Fallout 76 is a great game so, despite the general consensus that it’s about as much fun as sticking pins in your eyes, it does appear to have some fans.

But yes, Fallout 76 is not going free-to-play – or not yet at least. Who knows whether it may happen at some point; either that, or Bethesda simply decides to abandon the whole sorry project altogether. For now though, the developer continues to release patches in a desperate attempt to cobble together something quasi enjoyable.