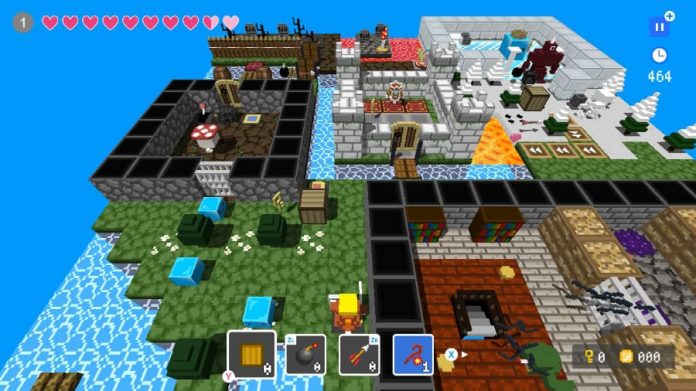 Block Quest Maker has made its way from mobile and Steam platforms to the Switch – and its brought along some of its woes.

Based on the simple premise of building your own dungeons and playing through others, Block Quest Maker offers a large enough tool kit for those eager to create, but not quite enough to create the masterpiece inside your head.

If nothing else, Block Quest Maker really makes me wish I had a stylus for my Switch because that would make level design so much smoother. That being said, the touch screen mechanics are probably your best bet, as they allow you to draw your dungeons, in a sense, which is a little easier than building them brick by brick. The ease with which you can create your own little world is certainly the highlight of this game, and from the moment you first step into the dungeon creator, you can have your first operational level up and running in under 15 minutes if you keep it simple.

With levels being anywhere from 5×5 to 32×32, there is a fair amount of leeway for creativity. But even with the largest levels, you can still feel a bit bogged down in terms of space and available options. You can craft floors, water, traps, platforms, enemies, doors, item drops, etc. Certain events can trigger others. For the seemingly small kit you have to work with, there is definitely room to build something unique. Those who dedicate some time to learning the more detailed nuances of Block Quest Maker‘s mechanics will learn of the many deep-seeded things you can do such as secret enemies, hidden doors, and so on. Block Quest Maker touts its ability to give you the freedom to create a puzzler, RPG, or action-adventure dungeon, and the more you explore, the more that realisation comes into light. With that being said, though, there are some lingering issues. 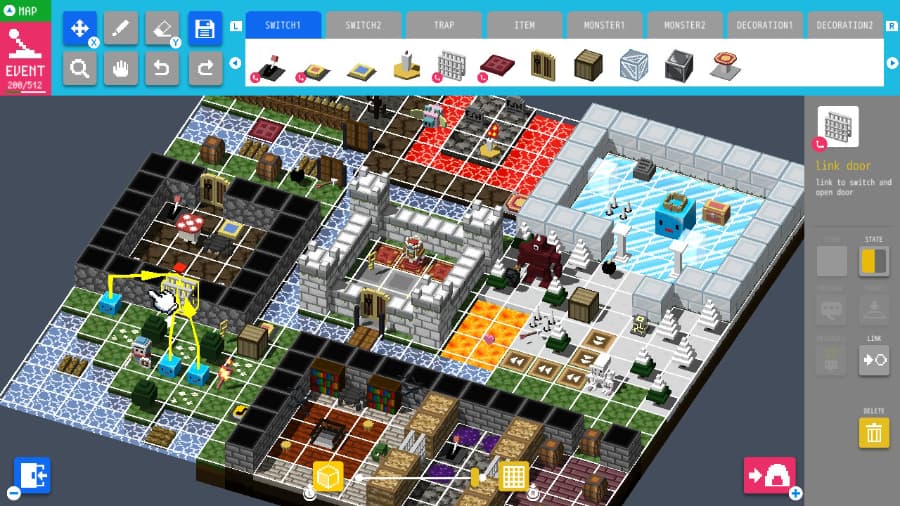 The game economy is rough. It costs money to upload your level to the server, and it costs money to play another player’s dungeon. In-game money, that is. You can earn money back from players who play through your level, with your cut of the admission price being based on whether they complete it or fail it. This system is troubling at first glance, as it may push people towards making high-difficulty levels for a payout. Then again, Block Quest Maker doesn’t appear to be a game that will have such a cutthroat player base.

Being able to change your camera during level play is a great touch. Placing the camera directly behind the player makes the dungeons feel much more vast and alive. It also helps to keep some of the secrets of the world a larger mystery, as the bird’s eye view can give away parts of the puzzle before the player’s even begun. The camera controls in general actually stand out to me as one of the highlights of the game as a whole. Whether you’re exploring a dungeon or creating one of your own, Block Quest Maker allows you to get just the right angle on the scene to analyse the situation properly. I felt like I could visualise everything I needed to when building a world because of how easily I could move the camera where I needed it.

It would be great to see Block Quest Maker grow. I hope to see more elements in terms of level tools added to the game. As it stands now, it’s a solid addition to the Switch’s library but definitely not a requirement. I had fun crafting worlds and learning the deeper quirks of the tool set, but I still felt at times that what I truly wanted to do was just steps away from being realised. If you’re looking to stretch your creative muscles on the Switch, Block Quest Maker might be the solution. But as with any game of this type, building a game inside of a game will always be limiting. It’s still pretty neat that we can do that, though.