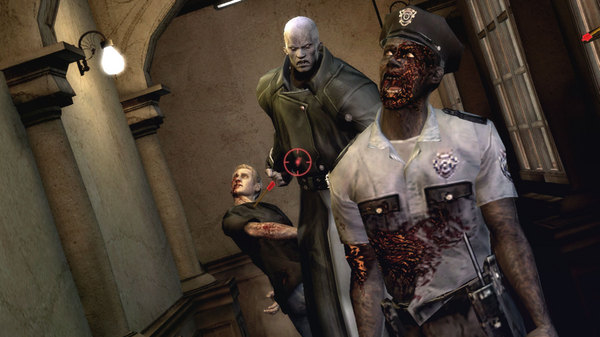 The Tyrant, or Mr. X as he’s commonly known, can prove to be a pain in your backside in Resident Evil 2.

He’ll often appear, mostly when you’re in the police station, and pursue you relentlessly as you try to go about your business. For the most part he can be quite easily avoided by drawing him into large areas and then simply running around him. If you’re trapped in a tight area or wanting to take your time investigating something though, you’re going to have to fight him.

Unfortunately, you’ll discover that the Tyrant, or Mr. X, cannot be killed. No matter how much punishment you dish out to him, he’ll eventually begin to pursue you again. What you can do, however, is temporarily stop him in his tracks.

Deal enough damage to the Tyrant (Mr. X) and he’ll be brought down to his knees for a short while, allowing you to run past him without any trouble. Use the opportunity to put a decent bit of distance between you and him and you’ll be free to go about your own business without any hassle for a short while. He will get back up and come after you again at some point though, so listen out for his footsteps which are a telltale sign of when he’s getting near.

Visiting rooms with save points is also a good way to shake off the Tyrant (Mr. X). He’ll stop pursuing you when you enter one, and will wander off, probably quite annoyed. Simply wait until he’s gone, and then head out on your travels again.

If you’re an achievement or trophy hunter, try shooting Mr. X’s hat off for a reward. You may as well get something for the trouble he causes chasing you around in Resident Evil 2.