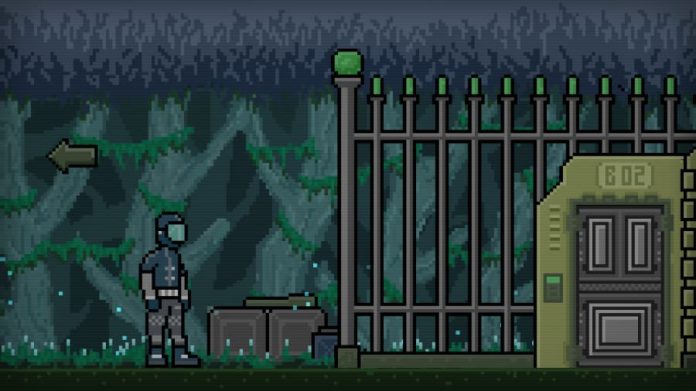 Generally, it’s hard to recommend a game that’s completely over in less than 30 minutes, but Planet RIX-13 has a certain charm I couldn’t help but love.

No, honestly; I completed Planet RIX-13, a pixelated adventure game, in about half an hour. The game started with my character outside of a wrecked spacecraft on an unknown planet. I was left to explore, figure out what had happened, and find a way to get the hell off of there. That meant jumping between a number of locations, finding clues and solving puzzles.

It’s a basic game, but the puzzles really hit the spot if you’re a fan of old-school adventures. A note you find may hold a cryptic clue for a locker combination, for example. And weird doodles that don’t make any sense at first will soon become useful as you explore a new environment.

Planet RIX-13 ain’t a looker; it’s a 2D side-scrolling affair, with basic and somewhat repetitive environments. But there’s some charm to its rudimentary pixel art. Our character is, to us, a nobody – but we can at least sympathise with him that his surroundings are just as unfamiliar to us, too. It’s a shame the game never really makes the effort to give them more of a personality. Unknown names float past our eyes as we uncover more about this abandoned planetary base we find ourselves in, but none of them ever really mean anything.

In terms of story, it’s inevitably thin on the ground with only a 30-minute run time. There’s no arguing that. But let me get back to the puzzles. There’s a certain old-school charm to them; the sort of brain teasers that you complete best with a pad of paper at the side of you. It’s a shame there aren’t more to get your teeth into, because figuring out how to get through a locked door, deciphering some cryptic pattern or simply breaking into someone’s locker, is all incredibly rewarding.

If you enjoy a good puzzle game, I’d wager Planet RIX-13 is worth a punt on. On Steam, it’s only £2, and less than a fiver on Xbox One, PS4 and Switch. And bonus: if you’re into achievement/trophy hunting, it’s pretty generous in that regard.