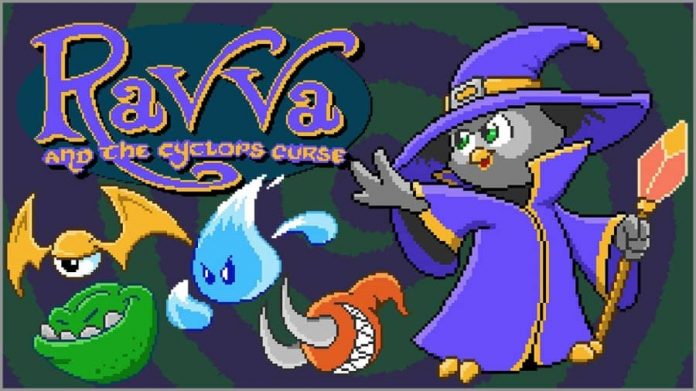 With recently released consoles like the SNES Mini and PlayStation Classic it has become more evident than ever that people love their classic games.

Ravva and the Cyclops Curse from developer Galope has taken that love of the old and turned it into a brand new NES-inspired platformer. And it is incredibly fun.

In the game you play as Ravva, a small but stylish owl on a mission to save her mother who has been captured by the evil cyclops lord. Ravva has the ability to summon four different creatures to help along the way. One summon spits out acid, another freezes, another shoots at an angle, and the last is able to detect secrets inside the level. All of them can work together in defeating monsters and getting closer to saving Ravva’s mother.

In each level you’ll be fighting enemies while utilising your four summons to tackle obstacles. It isn’t easy, but once you get used to the controls (I recommend using a controller) you’ll pick up on how things work pretty quickly. With only three lives you need to be careful or you’ll have to start back at the beginning. After playing through the first level three or four times I was finally able to blaze on through.

Ravva and the Cyclops Curse is a short two-hour adventure, but there are nine playable levels full of different backgrounds, enemies, and bosses. Its soundtrack feels like you’ve just jumped inside of a classic NES game, and players from all different backgrounds are sure to love the kick of nostalgia.

It’s super cheap, too: Ravva and the Cyclops Curse is available on Steam for just $2.99/£2.09. If you fancy a bit of a retro-inspired challenge, you should definitely give it a go.