For most of us, the thrill of Las Vegas is far, far away. Since the rise of online casinos, though, that thrill of playing games for money is now just as popular in our own homes – although perhaps without the same amount of glitz and glamour.

Casino-themed games aren’t just bound to your PC or tablet, either; there are a number of worthwhile titles available on your Xbox One, both paid and for free. We’ve chosen six of our favourites right here.

Originally an Xbox 360 game, Texas Hold ‘Em is available on Xbox One thanks to the wonder of Backwards Compatibility. If you want to practice your poker face, Texas Hold ‘Em allows you to play in single player, or against up to eight other players (either online or against the CPU). And to spruce things up, there’s also a few DLC packs to download that’ll give you new environments, including a classic casino – and a jungle.

The free-to-play Prominence Poker is a poker game set in the insanely interesting but dark world of underground crooks and gangsters. It’s all about hustling in secret back rooms, playing with dirty money and competing against a varied array of, er, ‘colourful’ characters.

Of course – it’s all just for fun. You’re not really gambling for dirty money, but that’s what makes the game all the more entertaining. While the base game is free to download, there are a number of add-ons you can buy that give you more chips to play with and various boosters. But if you fancy just a little dabble, it’s completely free to jump into.

VooFoo’s Pure Hold’em might me one of the more popular hold’em poker games available on Xbox One – and certainly one of the most polished. It features realistic table graphics, taking you right to the centre of the action. There are a number of settings to work your way through, starting on the casino floor and ending up in the high roller’s suite in the VIP penthouse.

There are add-ons to buy if you want to spice up your deck of cards or your chips with various designs, or you can opt to buy the Poker Mega Pack which includes the game and all the available DLC for a reduced price.

For some, solitaire might not be the most exciting or enthralling card game out there, but it can be super addictive. The simply-titled Solitaire from Bigben Interactive offers up three different types of the popular card game: Spider, Klondike and FreeCell.

Each game has a choice of difficulty options as well as leaderboards so you can compete against the best players in the world. There’s also a number of different settings to choose between to brighten up your screen – stick with a regular casino table, or opt for a beach or Japanese tea room theme.

Ever wanted a bit more old-school arcade style in your poker game? Then Super Blackjack Battle II Turbo is probably for you. It pays obvious homage to the likes of Street Fighter while managing to also be an entertaining blackjack game. There are twelve characters to choose from, each with their own personality.

Games of Blackjack are interspersed with fun cutscenes, and since games only last a few minutes at a time, it’s a great title to pick up and play for 10 minutes or so. Not many card games have as much personality as this one does.

Vegas Party looks a little rough around the edges, but it offers plenty of entertainment to those who dare give it a try. Originally released on PS4 in 2017, it more recently made its way to Xbox One. It combines classic casino games with an interactive board game, pitting you against real-life players or against the CPU. You’ll roll a dice to move around a board, occasionally landing on spaces that’ll lead to Vegas-flavoured mini games.

Perhaps you’ll play a hand of poker, pull the lever of a few slot machines or try your luck at roulette. There are 10 minigames in total, with the aim being to win as many as possible. It’s best played with friends or family in the same room, but it’s entertaining against the CPU, too. 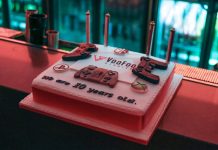 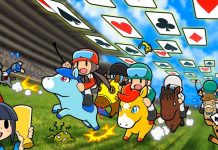 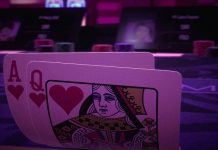