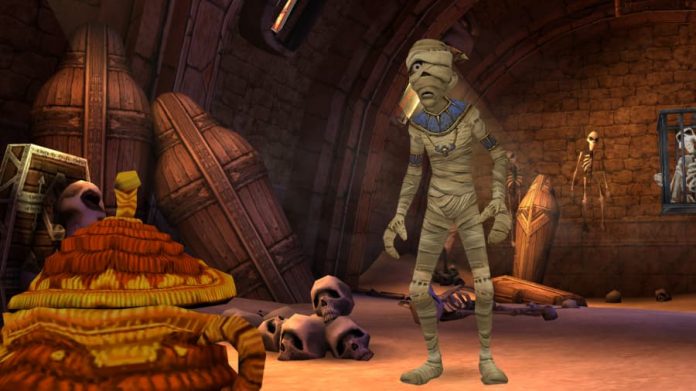 Over fifteen years old and originally released on PS2, Xbox and GameCube, Sphinx and the Cursed Mummy has been raised from the dead. A remaster of the game is now available on Switch.

Why? Who knows. While its original release fared decently with critics, I can’t say it was ever a particularly lauded title; I’d never even heard of the original. I can only imagine the recent success of remasters such as Spyro and Crash Bandicoot has made other 3D platformers of old crawl out of the woodwork, too. Some of them really should have stayed there, like last year’s Asterix and Obelix XXL 2. I’m on the fence with Sphinx and the Cursed Mummy, though. While it’s clearly very dated, it does carry a certain charm that’s hard to find in more modern releases. But whether that’s enough to warrant buying a game that’s almost old enough to drive a moped, I’m just not so sure.

The remaster work done on Sphinx and the Cursed Mummy is light, but adequate. This is nowhere near to the scale of the work Toys for Bob and Activision did with last year’s Spyro Reignited Trilogy, which was essentially remade from the ground-up. Instead, textures have been tidied up, character models given a bit of extra detail, and a new lick of paint has been splashed here and there. In practically every way though, this is the exact game it was 15 years ago, warts and all.

That’s not to say it looks terrible, though. Sphinx and the Cursed Mummy does show its age, but even two generations on, it’s easy to appreciate its art style and aesthetic. Environments might not be as sharp as they once were, but they’re still beautifully designed and filled with character. Its Egyptian-themed landscapes are teeming with details, and if this game was made with 2019 technologies, it would be truly stunning. As it is, it’s still pretty nice to look at – especially when playing in handheld mode. 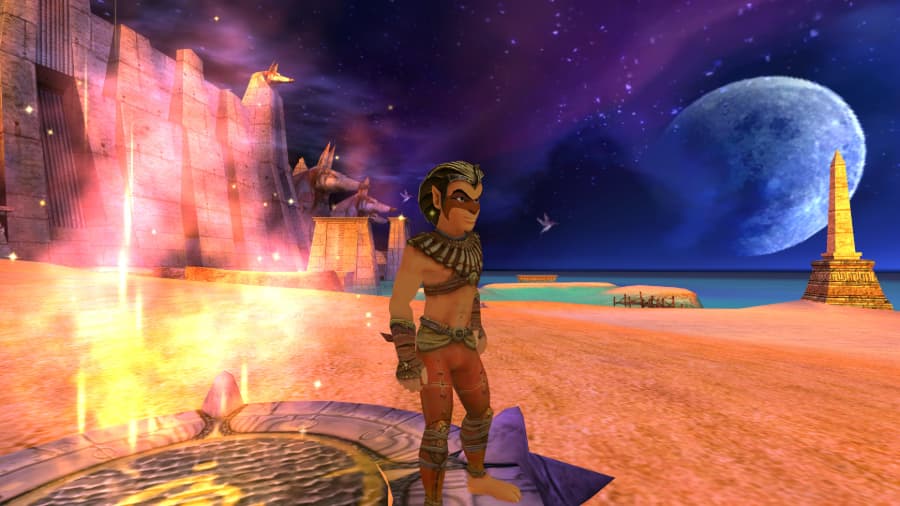 But it’s the gameplay that matters most, and here Sphinx and the Cursed Mummy is a mixed bag. It’s a surprisingly sizeable game, with numerous areas to explore, new skills to unlock and plenty of NPCs to meet and enemies to fight along the way. Like any traditional third-person action-adventure game, it’s packed with environmental puzzles and combat. And when you’re deep in the throe of things, it’s a lot of fun. Puzzles are rewarding to complete without ever being too tricky. Combat is a simple affair, but even bashing one button to swing your main weapon is enjoyable enough. But, as nice as the game’s environments are to explore, it’s all too easy to get lost – and there’s practically no signposting to point you in the right direction.

Often, your task at hand will be relayed to you via a conversation with an NPC. Fail to pay attention to that (text-only) conversation, and you’ll be at a loss of what to do. You’ll need to make sure you speak with everyone in an area, too, as your main objective may not become clear until you have. It means progression in more open areas can be laborious. And with no heads-up display or minimap – which would be an absolute god-send in some of Sphinx and the Cursed Mummy‘s larger areas – it’s sometimes hard to know if you’ve missed somewhere important.

If you’re happy to take your time with a game and revisit the same places constantly to try and figure out what you’ve missed, then great. But it seems that one thing games have got better at in the last fifteen years is respecting our time. It’s not necessarily a case of hand-holding, but an occasional nudge in the right direction can save an awful lot of frustration. 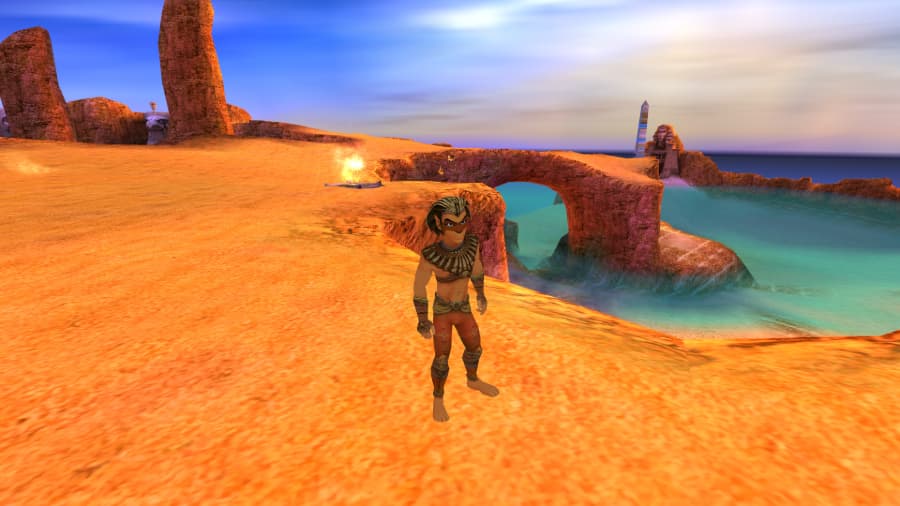 Another annoyance, where Sphinx and the Cursed Mummy really shows its age is its save points – or lack thereof. We’re back in 2003, remember; the days before our good friend the autosave was prevalent. You can only save your progress at a save point, and they’re pretty few and far between. Should you die, be prepared to lose up to 30 minutes of progress, or more. Thankfully, the game isn’t so taxing that you should find yourself dying a lot – but with limited health it’s not out of the question that an enemy can take you by surprise.

I wouldn’t say Sphinx and the Cursed Mummy is an essential buy on Nintendo Switch. If you happen to have fond memories of the original, I’ve no doubt it’ll be fun to go back to. And if you’re a diehard 3D platformer fan (do those exist?) then you’ll probably find something to enjoy here. But for the rest of us, Sphinx and the Cursed Mummy is just a little bit too dated to carve out a place in the modern market. Its aesthetic may still carry some charm, but next to the likes of Super Mario Odyssey, or even the remakes of Crash and Spyro, it just doesn’t hold up.

Sphinx and the Cursed Mummy is available on Nintendo Switch. 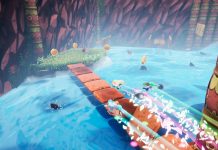