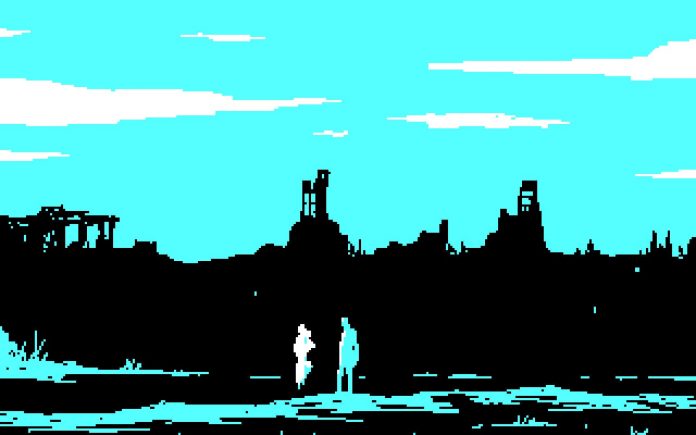 The Eternal Castle [REMASTERED] purports to be a reconstruction of a 1987 DOS game.

As you can imagine, there are already legions of Reddit users and critics flocking to disprove this claim, crowding forums and archive sites with abrasive commentary on being ‘deceived’ and pseudo-investigative jargon. The reality is that in trying to verify the claim they have entirely missed the point of it. Anybody can see that The Eternal Castle [REMASTERED] is not a remake. This doesn’t mean that the developers are, in any way, ‘deceiving’ us. The Eternal Castle is strongly declaring its lineage by inferring that it is a much older game, in the same way that films purport to be ‘real’ by filming them guerilla-style with hand-held cameras. It acutely resembles original CGA titles from the 80s aesthetically too, with a kind of cyberpunk four-colour palette.

However, it is also more than this. The Eternal Castle [REMASTERED] is not simply another retro-nod (one is starting to get tired of endless bands, games, and films trading off the nostalgia gimmick). It is something much deeper. In Gothic horror, there is a concept known as ‘verisimilitude’, which is where the horror is ‘amped up’ by purporting that the text is ‘real’. A good example of this is when the writer Horace Walpole claimed that his Gothic masterpiece The Castle of Otranto was not his own work, but merely a translation of an ancient manuscript he found in an Italian ruin. For a long time, people believe this was a true account. Only later did he get ousted as the real author. You may have already noticed that even the title of The Eternal Castle is a nod to Otranto’s work and Gothic literature.

In claiming to be a reconstruction of a half-forgotten game, The Eternal Castle [REMASTERED] is evoking ‘half-forgotten’ legends, stories we repeat down through the eons that are subtly retold again and again. Thematically, dreams and dreaming are central to the story that is subtly conveyed throughout The Eternal Castle [REMASTERED]. It is the idea of heroic narrative drawn out of a Jungian unconscious. It is the collective experience of humans to remember monsters, labyrinths, tribulations, and wonders lost to time and decay. We are all embedded with a kind of ‘narrative code’, which is what the great myths of old, religion, and spirituality fundamentally tap into and why they resonate with so many people, much like The Eternal Castle’s code is embedded with hidden allusions and surprising mechanics. 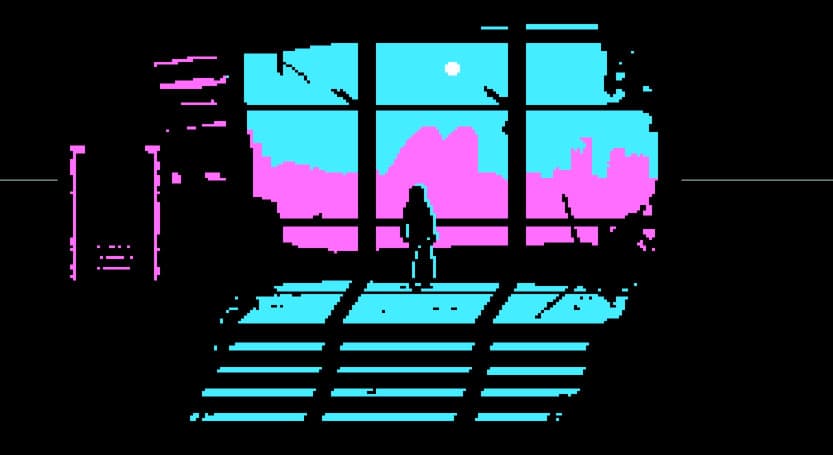 If you’ve come this far, you can tell I deeply admire the game. It is sublimely done. A work of art in the true sense. In our literal culture, increasingly obsessed with higher levels of ‘fidelity’ (remaking classic and beautiful Disney films with boring, ‘realistic’ CGI), the impressionism of The Eternal Castle’s art-style is breathtaking and a breath of fresh air. The way the four-colour palette works to create atmosphere and build a sense of dread is masterful. The fact that certain creatures or objects are formed with only a few pixels allows the imagination to run riot and intensifies the sense of horror. It has you asking ‘what the hell is that?’ The old masters of writing horror (and indeed, of making original horror games) knew that sometimes the less you see, the scarier it is.

The Eternal Castle is not all horror though. Sci-fi is important too. And action. I mean this in two ways; action as a genre, and ‘action’ in the sense that the game really does put you in the driver’s seat. I think what staggered me most is just how much of it was interactive. Pick up every item your opponent drops. Examines consoles and open new pathways. Shoot through ropes and drop objects on your enemies. Lure opponents into traps. Thinking laterally and having faith in the game’s mechanics is often rewarded, as is curiosity following hidden paths.

The quality of the animation is off the charts, which is an interesting juxtaposition to the minimalist visual design, and makes your actions feel rewarding. Special credit goes to Edoardo Bussetti for his work on this aspect. There are incredible details which make the game feel bizarrely real despite its more artistic visuals. While running, if you encounter a small object, you just might trip and go sprawling in the mud. Stop dead close to a fall and your character will overbalance and flail their arms to stop themselves plummeting over the edge. The control-inputs here are not 100% perfect, deliberately so. It is meant to feel real, sluggish, and painful in some ways. Mastering these little kinks is a sure way to improve your survival chances. 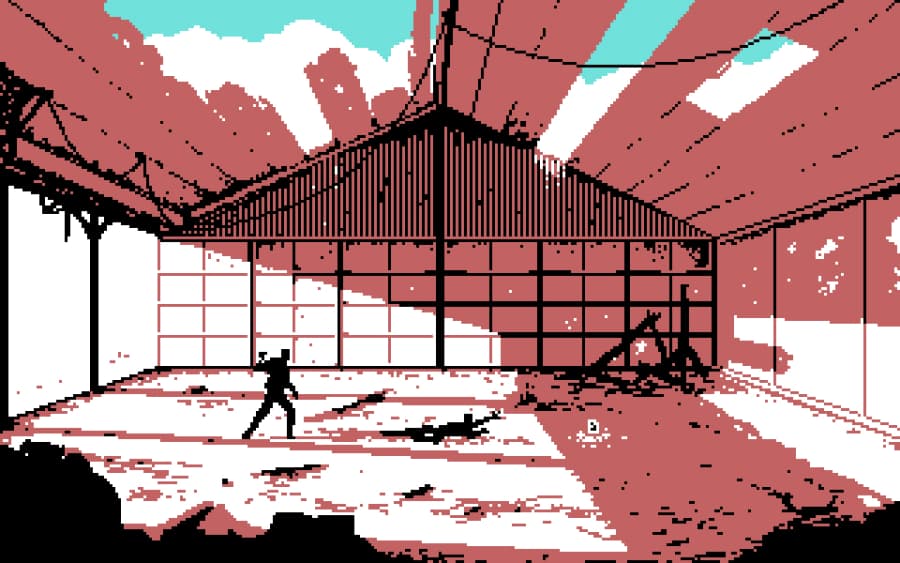 The fantastic animation work is environmental too. As I approached one area, thunder cracked across the sky and it began to rain. It was beautiful to watch, almost like an ancient celluloid movie. As I waded into a marsh, dogs howling, rain pouring down, the sublimated and dreamlike nature of reality was reflected in the fact that all the colours on my screen were bleeding into one. I couldn’t tell what was going on, which I’m sure was also true of my heroic protagonist, waist-deep in mud and blinded by rain. Later in the game, post teleportation, you’ll heave up your guts and collapse. It’s touches like these that make you believe in the suffering of the protagonist, Adam or Eve (depending on which you pick).

Though the game’s initial playtime is relatively short (I’d say between two and six hours depending on certain decisions and just how generally good at this kind of side-scroller you are), there is a wealth of content here and many things which you won’t discover on a first playthrough, such as unique items that offer tactical advantages, hidden enemies and characters, and alternative routes to victory. There are a lot of choices on your way through. After completing the first section of the game, you’ll reach a point where you need to fix your ship by obtaining three Gliders. Each Glider is located in a different section of the map; a forgotten city, an ancient ruin, and a haunted mansion upon a hill. Once you have completed all three of these ‘dungeons’, you’ll be able to try the final assault on the Eternal Castle itself.

There is an element of genre-blending here. The haunted mansion is very much a nod to Gothic, with an insane organ-playing scientist who seems a cross between Shelley’s iconic Victor Frankenstein and the Phantom of the Opera. There are mutants in the house and horrifying transformations which take place. The ancient ruins are more like a homage to Mad Max, a place where fighting-obsessed zealots have forgotten the true nature of technology and worship the exchange of fists in the arena. It is tied together by the idea of a degenerated humanity living on a post-apocalyptic (and post-AI) Earth. Above and beyond simply merging genres which the creators clearly enjoy and giving players different visuals, however, the three locations mean that if at any point you are stuck on one zone, you can teleport back to your ship and try another. There has already been some discussion on Steam as to what the best order to do the zones in is. 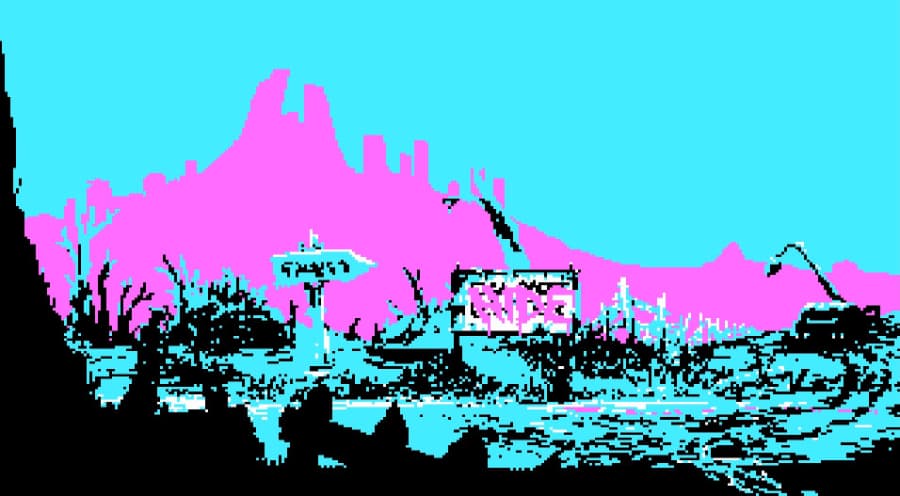 Each of these areas has its own unique flavour and challenges, but all of them instil the same powerful uncertainty which is what makes the game so interesting. Unlike so many modern titles, where icons and information galore pop up when we encounter an NPC or enemy, The Eternal Castle lets you figure it out. Every character is a silhouette, so how can you tell which are friend and foe? By the way they move? By their eyes? Though apparently simple, The Eternal Castle oozes nuance. Just when I thought I was going to encounter another horde of enemies in the Forgotten City, for example, they turned out to be potential allies: rebels fighting a guerilla war against heavily armed militants amidst the shattered skyscrapers and sewers. In another area of the game, I found there was a certain effect that altered my controls. All the clues were visual. At no point did text pop up to hold my hand and tell me exactly what was going on. This is the power of The Eternal Castle: it works upon the imagination.

There are very few tutorials here, even at the start. It tells you how to run, how to jump, how to climb and how to press buttons. The rest, you have to figure it out yourself, and figure it out fast, because The Eternal Castle [REMASTERED] is punishingly difficult at times. About a third the way through the game I realised that it was possible to store two weapons and change between them. Every weapon has an alternative attack style. You can also play with more than one player if you’ve the right controller setup. Some boss fights are optional if you know what to do. This game is full of secrets, full of mystery, and full of old-school wonder. I won’t tell you how to do any of the above. That would ruin the joy of discovering it for yourself amid bloodshed and desperation. 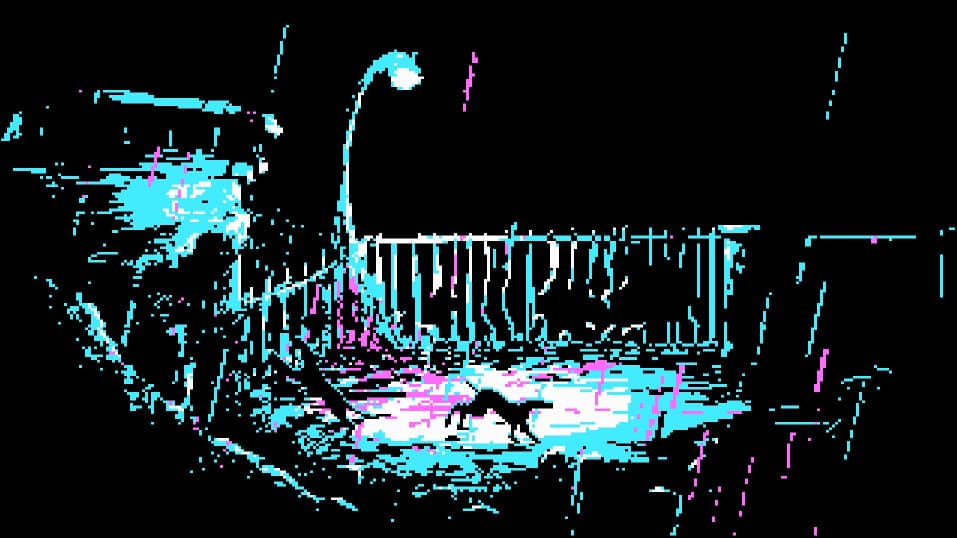 If I have criticisms, it’s that at times The Eternal Castle‘s obfuscation works against it. For example, I nearly tore my hair out attempting one early boss fight over and over, unable to see the solution. It seemed ridiculously unfair. I think for some people this would have been a ‘walk away’ moment, which is a shame to consider, but it was incredibly frustrating. In addition, the game has survival horror elements in that conserving your ammunition/resources is an optimum strategy, but this is in no way emphasised – until you’ve discovered it the hard way. This partly lends it Souls-esque difficulty charm, but it can also feel like the game has under-equipped you.

There are one or two significant bugs in certain areas of the game, too. None of them are game-breaking. Many can be fixed with a simple checkpoint load, but once in a blue moon you’ll find yourself wondering whether something was ‘meant to happen like that’. I strongly suspect, however, that the developers embraced this element of ambiguity as it plays into the game’s status as a remake-from-memory and adds yet more meta-textual depth to an already multi-layered experience.

The Eternal Castle [REMASTERED] is not like any other game I’ve played. It is both hyper-modern and old-school, horrifying and uplifting, rich with detail yet surprisingly concise when all things are considered. It has immense replay value, not in the least because of extensive new game plus content. On the whole, it is something of a cinematic masterpiece that still feels like a game and rewards a gamer’s curiosity, investigation, and persistence. The Eternal Castle’s storytelling is mythological and feels like a true hero’s quest. The mood, ambience, and ultimate meaning of The Eternal Castle all come together, intertwined and beautifully realised. It will be a long time before The Eternal Castle [REMASTERED] leaves my imagination, which, funnily enough, is exactly the feeling from which the developers created it.

The Eternal Castle [REMASTERED] is available on PC. 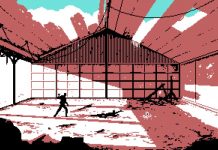