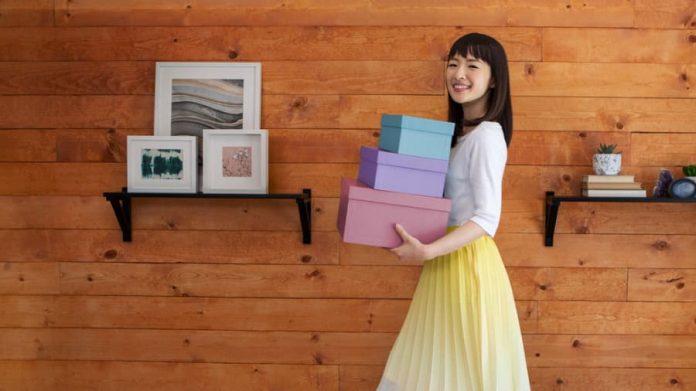 There’s a scene early on in Netflix’s Tidying Up with Marie Kondo that feels like something out of a sketch show, a strange spoof of how weird this new breed of “expert comes in and fixes your life” shows are getting.

Except Marie Kondo really is considered a “world expert in tidying up” and she really did write a book called The Life-Changing Magic of Tidying Up, and she really is now on a mission to tidy up the houses of America. This being the US, the reactions are extreme, with people literally crying after a woman explains the revolutionary concept of throwing some of their crap away so they have more space. It’s a show that addresses what must be the ultimate #firstworldproblem: the emotional distress caused by having too many things.

Now, I know calling this the weirdest show on Netflix might seem a strange stance, given that the streaming behemoth hosts everything from OTT anime to mind-bending shows about dystopian futures. But here’s the crucial thing, those shows are designed to be weird. Their unusual settings, characters and scenarios are a key part of their appeal.

By contrast, Tidying Up with Marie Kondo presents the KonMari method, which infuses an almost cult-like spirituality inspired by Shinto Buddhism into tidying up. The clear goal of the show is to have you adopt the KonMari method, to thank t-shirts for their service as you donate them to charity, and to acknowledge the spirit of your house. There’s nothing Machiavellian about any of this – but I find it most strange that the weirdness of the concept is never mentioned in the programme. The only emotions allowed are seemingly a childlike sense of wonder, frustration at the previous state of things, and a general awe that Marie Kondo sometimes acts like a normal human being instead of a magical tidying fairy.

In the first episode, we’re introduced to the Friend family, a married couple with a son called Jaxon and a daughter called Ryan. He works long hours, she hates doing laundry, and they both understandably struggle to find the time to keep their house tidy while looking after two small children. And then marvellous Marie arrives and shares her methods of tidying and choosing what to throw away.

Chief among these is the concept of only keeping things which “spark joy”. Frankly, this seems like common sense: why would you keep stuff you never use and don’t care about? But the show treats like this like a road to Damascus moment. There’s much talk of honing your sensitivity to joy, of trying to identify what joy feels like, and you must thank everything you don’t keep. The method goes through various stages for different categories of stuff (clothing, sentimental items, toys etc.), with Marie also sharing tips on the correct way to fold clothes (they’re supposed to stand upright in drawers, apparently) and organise things in the kitchen. Thankfully, the programme at least doesn’t pretend you can complete this process in a few days, Marie instead popping back a few times over the course of a month, with some of the gaps filled in with shaky handheld footage.

The production team does their best to make this seem dramatic, with the old footage in black and white and some plinky piano music meant to highlight the desperate state of affairs. But shots of empty wardrobe space or a cleared-out garage just aren’t that interesting. They struggle to elicit much of an emotional reaction from anyone except those involved, who cry and talk about the profound change it’s made to their lives. It may well have done, but surely a key part of this is the presence of a camera crew encouraging them to spend a month tidying their house; that they’ve miraculously been able to find the time to tidy up that they were never able to find before.

The best part of Tidying Up with Marie Kondo is, fittingly, Marie Kondo herself. She has the charisma and soothing air of a cult leader, and perhaps we should all be grateful that she has devoted herself to the art of tidying up instead of world domination. She makes everything seem wonderfully straightforward and has a way of mystifying the bleeding obvious that sometimes makes it feel like you’re back at primary school, when the grown ups in front of you held all the answers to this baffling world.

Combined with the lack of drama, it’s this blending of the spiritual and the mundane that makes Tidying Up with Marie Kondo quite so bizarre and gives it a more than decent claim to be the weirdest show on Netflix.