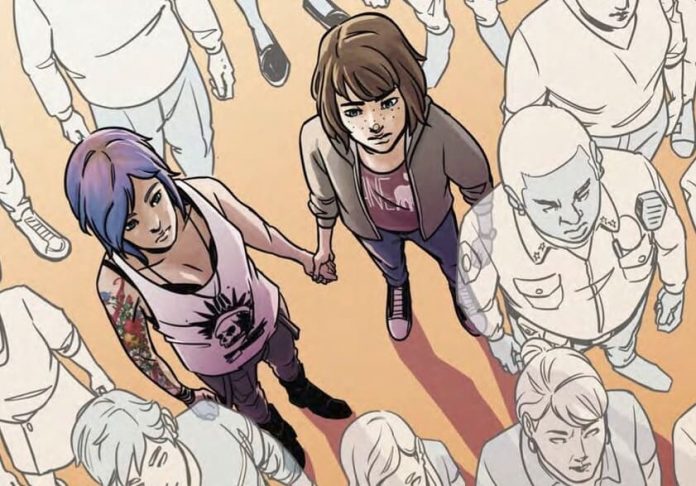 “The road to Arcadia Bay felt like tracing a vein right back to the heart of the storm.”

Dust, the second issue of Titan Comics’ Life is Strange series, is an emotional journey back to Arcadia Bay; one that was started in the first comic in the series. Within issue 2 we see Chloe and Max travel back to Chloe’s house and the breakfast diner that Joyce worked at. A lot has changed since the storm a year ago, but Dust sees the two protagonists explore a different reality.

When they enter the diner the wreckage the storm caused is obvious. Claudia Leonardi continues to beautifully portray the story through the fantastic artwork. She also manages to highlight the change when both Chloe and Max see an alternate reality, one where they speak to Joyce’s old friend.

Chloe is obviously shaken by this, and she decides to travel back to her old home. When there, Max has another vision; one that doesn’t fit in with the reality. Only this time, Chloe isn’t involved within it. It’s by far the most emotional part of the comic series so far, and one that perfectly suits the heart-wrenching moments from the original Life is Strange episodes.

Interestingly, it is a reality that could fit in with the Life is Strange story. The Titan Comics series follows on from the choice where Chloe is saved, but this alternate reality in the comics could also tie in with the second choice: saving Arcadia Bay. It looks like both actions could have consequences which are explored in the series.

Writer Emma Vieceli has continued to capture the characters of Max and Chloe well. With Dust Vieceli has written a story worthy of the series, one with huge twists and turns, and it is certainly heading towards an interesting issue 3 and 4.

Life is Strange #2: Dust is available now on Amazon.