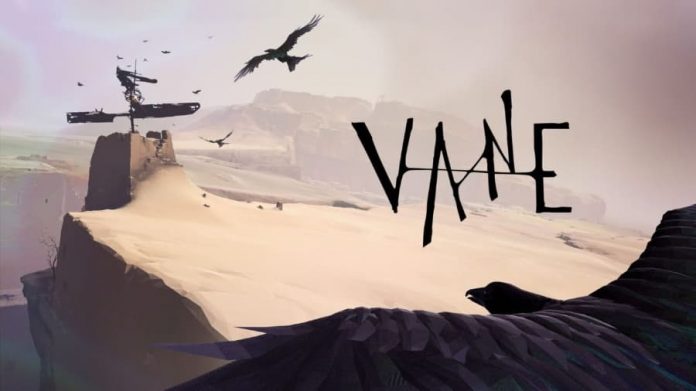 Vane, an open-ended physics-based puzzle platformer from independent developer Friend & Foe, is in many ways one of the most artistic games I’ve ever played. As a piece of entertainment, its singular approach to game design causes problems – but there’s something compelling about experiencing such a clear artistic vision. It feels like auteur game making, and Vane offers many of the pleasures of a well-crafted arthouse film.

In Vane, you’ll alternate between playing as a shimmering black bird and a small child, each of which needs to negotiate the challenges of its environment to affect greater change. Generally speaking, the bird sections are more open and the child sections are more linear; early on, the bird swoops over a vast desert and the child tries to figure out a way of getting out of a cave.

Whichever you’re playing as, you shouldn’t expect much in the way of guidance. The decision that defines Vane is its resolute refusal to hold your hand in any way – the game simply dumps you into an environment and forces you to figure it out. If most games spoonfeed its players, Vane is – perhaps fittingly – more like starving in a desert and foraging for sustenance. To take this approach with a linear game would be one thing, but vast sections of Vane (like that desert, for example) are sparsely populated open worlds – so it’s quite possible to spend hours flying around not really knowing what to do. It really is an artistic choice that blurs the line between genius and madness. It’s simultaneously refreshing to play something that refuses to obey the standard rules of game design, and also undeniably frustrating, demonstrating just why those rules exist.

In the desert, for example, there’s no map, no stark changes of scenery that help orient the landscape in your mind and, needless to say, no giant arrow pointing the way. There’s simply an enormous expanse of sand to fly over, which is punctuated by cliffs and rusted metal structures that hint at previous civilisations. In short, there’s a lot of white, yellow and brown and it’s often hard to remember where you’ve been and where you need to go. Perhaps evoking this sense of frustration and confusion is the point, but it creates obvious issues in terms of an enjoyable gaming experience.

There are more basic mechanical issues, too. Playing as the child, the platforming and movement has a floaty imprecision which makes these sections more challenging than they really should be. There are also some rough edges graphically, with pop-in and minor frame rate issues occasionally marring what’s generally a smooth experience.

Visually, there’s a rough beauty to Vane that reflects how the studio is comprised of ex-AAA developers. The bird, for example, has been lovingly rendered, with flapping, shimmering wings and a real sense of speed when you zip close to the ground. There’s something dreamlike about the way the game looks, with cliffs being masses of brown that look like they’ve been sculpted, moulded by some unseen hand. It’s also presented in a cinematic letterbox aspect ratio, enhancing the almost sensuous pleasure of flying above the desert and helping to create Vane’s distinctive overall look.

None of the problems break Vane, indeed the lack of guidance is what defines it, gives it its uniqueness and differentiates it from hundreds of other puzzle platformers. It’s often a game that’s easier to admire than actually play though; a challenging piece of art that makes almost everything else you’ve played seem like a spoonfeeding popcorn movie. The closest comparison is probably Jonathan Blow’s The Witness, but even that gave more guidance than Vane and was far more linear, too.

Vane is a unique experience and for that in itself Friend & Foe should be applauded. As an artwork, it’s compelling. But as a game, it’s recommended with strings attached: this is a harsh, uncompromising world and you’re going to need to struggle to survive.

Vane is available on PlayStation 4.