Prophecies are bollocks and Etrian Odyssey Nexus knows it.

In that respect, this anime-styled dungeon crawler is a breath of fresh air. Your parents haven’t been murdered because an ancient tome foretold you’d destroy the ultimate evil, nor do you hail from a long line of monster slayers. Your party of five adventurers, whose names you determine at the beginning of the game, are dungeoneering just for the thrill of it.

It also spares the local priest the humiliation of naming Dr Poo Shartwell as the chosen one.

True, it’s not compulsory that you give your characters the silliest names possible, but it’s heartily recommended. Etrian Odyssey Nexus lets you tweak your characters to the nth degree, right down to their character portraits, though it’s a little disturbing that some of the optional combatants appear to be about five years old. The game also sports some wonderfully off-kilter character classes including “farmer”, just in case you ever wanted to murder monsters with a scythe.

But what really sets Etrian Odyssey Nexus apart from its grimmer ilk is how relentlessly charming it is, even when you’ve spent the last five minutes incinerating a giant deer. The NPCs you encounter are entertainingly upbeat and are always happy to chat or fill you in on the world’s lore. The other adventurers, while technically your competition, embrace you wholeheartedly, thus creating a welcome sense of camaraderie. There is a story of sorts, ostensibly about reaching a giant life-giving tree but, it’s largely incidental. Etrian Odyssey Nexus is all about the journey, not the destination. 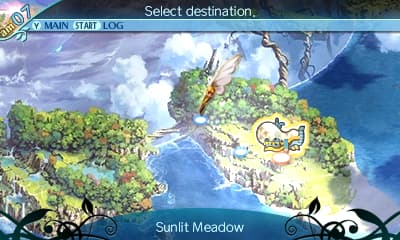 Etrian Odyssey Nexus‘ graphics are absolutely superb, and the semi-orchestral soundtrack is a real treat for the ears. Equally excellent is the character design. Lacking the usual gloomy, goblinesque horrors, the game pits you against some wonderful foes; one of the first enemies you encounter is a Muscle Fly, an oversized, buff insect. I found myself eagerly waiting each encounter, just to see what absurd enemies I’d be fighting next. Factor in the fact that many of the game’s “dungeons” take place in leafy overland locations and you’ve got a game that leaks sunshine.

Eye-pleasing as it is, Etrian Odyssey Nexus is anything but a cakewalk. Combat is turn-based, giving you ample time to consider your next move, but each dungeon features both random encounters and roaming enemies. The former appear as you work your way around each maze, while the latter stay in fixed locations but will pursue you if you get close enough and are far harder to kill. The random encounters can be intrusive when you’re trying to traverse a level, but for the most part they’re used sparingly (more so than in many JRPGs). 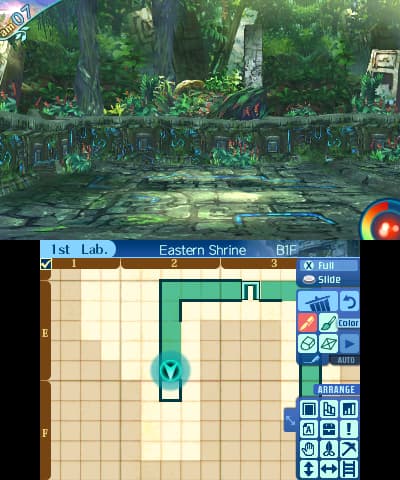 Actually defeating your foes boils down to sheer strategy; it’s lack of forethought rather than luck that typically costs your party their lives (lose twice and you’re sent back to the last save point). I failed miserably against one boss because I was using each character’s one-shot super attack early on in the encounter. It was only when I held back and instead used the attack to annihilate the boss’s healing support that I started to make headway.

Each major victory brings with it with rewards, such as materials which can be used to reinforce your existing weapons or purchase new ones. Though, thankfully, Etrian Odyssey Nexus isn’t a crafting-heavy game; just dump your finds at the local shop and the owner will happily do the bulk of the work for you… for a price. Etrian Odyssey Nexus does sport an “easy” difficulty level, but the game’s default difficulty level is so perfectly pitched, allowing you to make slow but steady progress each time you play. Despite its upbeat tone, death is necessary learning experience here. 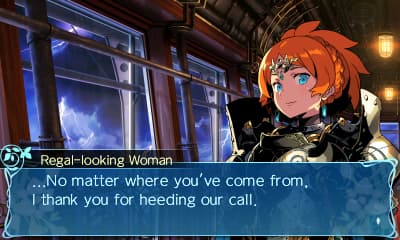 What may prove irksome, depending on your temperament, is the way that the game tasks you with providing your own maps. Each dungeon has a map shown on the bottom of the screen and, by default, the game colours in each square you pass through. But if you want the map to show doors or other significant locations, you need to drag them over yourself. Etrian Odyssey Nexus pitches this as a welcome feature, since you’re supposed to be exploring the jungle lands around the Yggdrasil Tree. And, as you make your way through the first of the game’s sequential dungeons, you’ll merrily start mapping away.

The snag is that, while the game doesn’t penalise you for not using the correct symbols, you can’t teleport to a specific dungeon level until you’ve explored every last inch of the previous level. If you’ve missed a significant number of blue squares, you’re forced to amble through the upper levels, dealing with (or running away from) any random encounters. It’s not a game-breaker but it can prove irritating at times, especially the game’s 20+ hour length.

Despite this, Etrian Odyssey Nexus is an excellent dungeon crawler, overland locations and all. It’s not only the perfect antidote to grimmer adventures but it’s an addictive, creative, appealing outing that will have you coming back for more and rarely regretting your return.