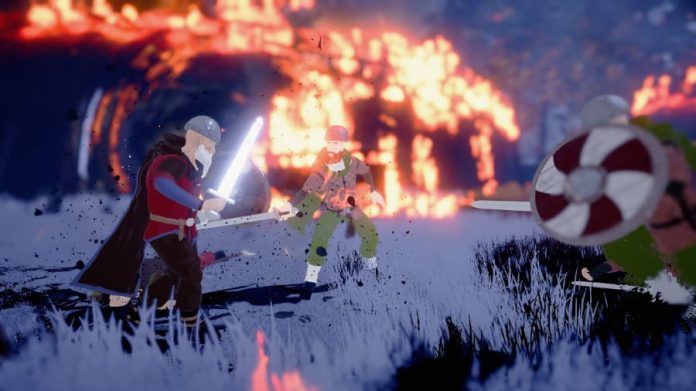 Fimbul weaves a tale through Norse mythology that strikes awe – but it’s backed by gameplay that leaves you wanting something more.

The premise of Fimbul is an enchanting yet straightforward story of revenge, destiny, and myth. You play as an old warrior, setting out to seek revenge against those who wronged him, and fulfil his true destiny by helping to save the world of Midgard from disaster. The world you traverse is beautifully rendered, though bleak at times. If you’re looking for a competent hack-and-slash adventure title, look elsewhere. But if you’re keen to play a game with an interesting narrative woven together with good, but not great, combat mechanics, then Fimbul might be a worth a try.

Fimbul is very short, but its duration isn’t what really held it back for me. It was the condensed narrative. It’s beautifully worded, and wonderfully animated through the comic book-style cutscenes, but at times it feels rushed. Backstory comes in pieces, and never truly develops into a rich, complex story. While your character’s motive for revenge is undoubtedly solid, I wanted him to develop himself a bit more. I sided with my character with his ideas of destiny and revenge, but I failed to truly see him develop and grow into the legend the story tried painting him as.

I won’t say that you need an immense amount of knowledge regarding Norse mythology to enjoy Fimbul, but it certainly doesn’t hurt to have some. I’ve always enjoyed Norse mythology, so already having a good deal of knowledge concerning names, locations, and lore, I felt a bit more connected to the story. Now, Fimbul doesn’t go out of its way to pick through the deepest and most obscure parts of Norse mythology, but not everything is going to be easy to digest without that prior knowledge. I can say, however, that the story of Fimbul never left me feeling like something was unresolved. It did well to tie up loose ends, and truly bring a sense of finality to the game itself. Though a bit rough through it all, Fimbul didn’t leave me with unanswered questions. 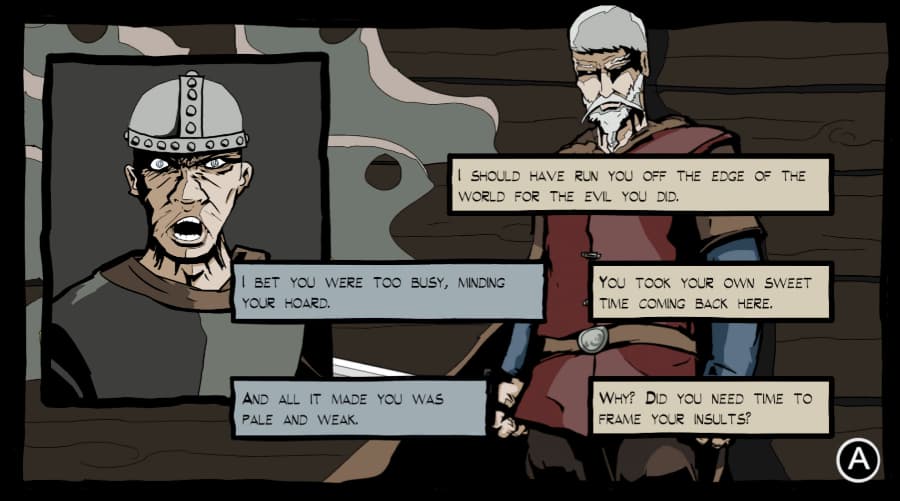 You don’t have a crazy arsenal to work with on your journey through Fimbul. You have an on-hand weapon which is either an axe, spear, or sword, and an off-hand shield. You can also unlock several special moves throughout the game which are activated on a point system that ties in with your combo meter. These special attacks include a healing banner, a ground pound, an execution attack, and eventually a transforming attack during the final battle. You have enough skills to get by, but it leaves you with little diversity between each combat scenario. The battles can be quite large and challenging, but I tackled them all in practically the same way as it seemed the optimal path.

Transitioning from enemy to enemy during combat can either be extremely smooth or miss by a mile. On occasion, I would finish an enemy and turn to continue my combo on the next, only to slightly shuffle forwards and swing at nothing. You can get punished very easily in Fimbul from missing attacks. The axe and sword have some longer wind-ups in their arsenal of moves, and some heavy attacks leave you vulnerable for what feels like an eternity. 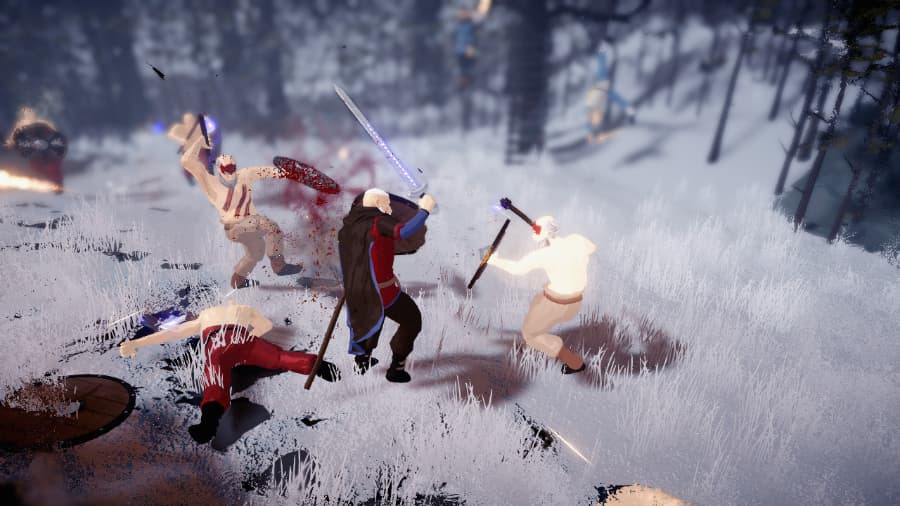 Mastering the combat of Fimbul comes down to being extremely precise and patient. Without a stamina bar holding me back, I just want to keep going; but one false step in the middle of battle here, and you’re going to pay for it. While not every enemy can punish your health bar to a large degree, it’s easy to helplessly watch your health drain when you’re surrounded and miss an attack. I appreciate that Fimbul gives you little respite in combat, but I do wish it chose a definitive side between realistic combat or arcade-style combat.

One of the strangest mechanics in Fimbul, for me, is how the boss fights are handled. You can damage every boss with your axe or sword, but every boss arena is covered in spears. You’ll use these spears, along with visual clues, to stagger your opponent and bring them to the ground where you’ll be able to do lots of damage for a few seconds. Then, you’ll rinse and repeat, often with the boss gaining some new abilities at various stages of their health bar. While I didn’t necessarily mind it, I did feel it was a strange choice. However, it does allude to the idea that you’re fighting giants. If nothing else, it drives home the idea that this is a battle between man and monster. 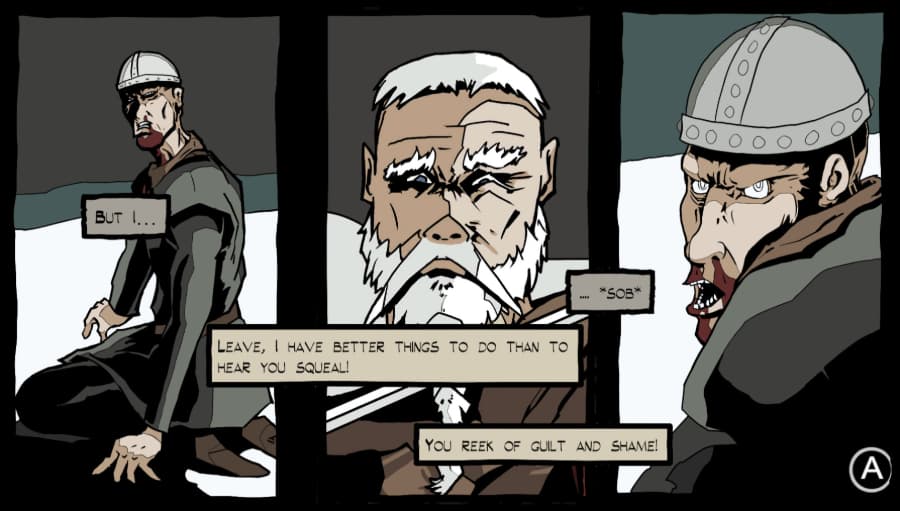 I really enjoy the aesthetic of Fimbul. The colour palette is great, and the world is true to its source material. The comic book cutscenes are beautifully animated and really give life to the characters and world. But even though the world looks pretty in its design and animation, there’s quite a bit of less-than-perfect camera work at play. At least five or six times during the short playthrough, the camera simply failed to follow me around a path, or went behind trees or grass for a long while.

I also really wish there was a more prevalent soundtrack accompanying your journey through Fimbul. This type of story begs for a beautiful score behind it. The dim, low music that follows you through the game failed to get the blood pumping.

When the credits scrolled and I finished Fimbul, I wanted there to be more. I wanted to explore more of the world. Go to the places that were just out of my reach. Was it because I loved what I played and needed to have more of it? I don’t think so. I think I just really wanted Fimbul to prove it had more to offer. It’s not a must play, but it’s a game that, if presented to you as a player or spectator, is worth charging through. It won’t take too long, and it presents a good enough challenge at times. You may walk away without much to say about it, but that doesn’t mean it’s all bad. Fimbul is bigger than world it traps itself in.

Fimbul is available on PC, PS4, Xbox One and Nintendo Switch. We reviewed the PS4 version.