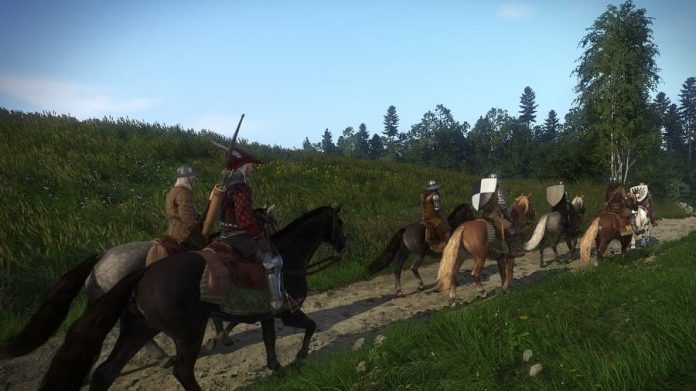 So, you love Kingdom Come: Deliverance and have chosen to pick up the Band of Bastards DLC to extend your experience. But how do you access it?

Like all of Kingdom Come: Deliverance‘s additional content, Band of Bastards offers an new questline that’s seamlessy woven into the game. So, you can’t simply access it as a separate item from the main menu, you need to find the quest giver in the world after reaching a certain point in the main storyline.

To start the Band of Bastards questline, you need to have played through about a third of Kingdom Come: Deliverance‘s story. More specifically, you need to have completed the quest called Baptism of Fire – you know the one; the quest in which you fight Runt in the ruins of Pribyslavitz.

Anytime after completing Baptism of Fire, seek out and talk to Radzig Kobyla. Chances are he’ll be at Pirkstein Castle in Rattay. If not, then check his encampment at Merhojed. Talk to him about the trouble on the roads and the Band of Bastards questline will commence, with your first task being to find the camp of a man called Kuno.

Kuno’s camp isn’t very far away from Rattay – it’s just a little to the north. Once there a cutscene will commence, though there’s one more thing to do before beginning the questline proper – prove yourself in combat.

Dangler is quite a worthy adversary – unless you’re rather adept at Kingdom Come: Deliverance‘s combat, you might find yourself getting a severe beatdown. If you do lose, consider improving your combat skills by visiting Captain Bernard on the outskirts of Rattay. Once you feel up to the task, go talk with Dangler in Kuno’s camp to fight him again.

Beat Dangler, and you’re all set to enjoy Band of Bastards.