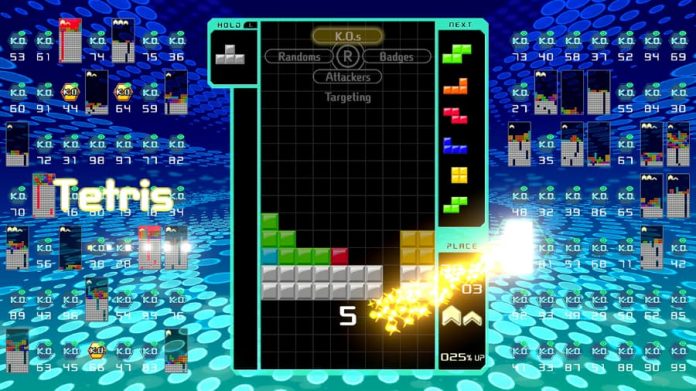 It seems pretty out there, and it is, but considering the current trend of battle royale video games, can we really be surprised? I’m not a massive fan of competitive gaming, but I am a fan of Tetris. And I’m not all that bad at Tetris. So of all the things announced during the Nintendo Direct – and there were plenty of wonderful things shown off (Link’s Awakening!) – I couldn’t help but be most excited about Tetris 99.

Playing a game of Tetris 99 is not all unlike playing a regular game of Tetris. The focus is on your own game screen, and you don’t really need to pay much attention to anything else other than arranging your falling blocks into lines to clear. Except, if you do pay attention, you’ll see that, at either side of your screen, there are 98 other, tiny games of Tetris simultaneously being played out; one for each of your rivals. Everyone that plays chooses a target (or one is chosen for them), and when you clear lines, you have a chance to ‘attack’ your target by filling up their screen with white blocks.

If you’re targeted, you’ll get a small window of time where you’re able to counter against incoming attacks. At the side of your playing area, a pile of blocks denotes how many lines are about to appear at the bottom of your screen. If you’re able to clear the corresponding number of lines, then the attack gets cancelled. But if you don’t, then your screen will soon fill up. It’s not a problem when it’s just one or two lines. But if you have multiple people targeting you, in a matter of seconds it can be game over.

When you start a game of Tetris 99, you’re automatically assigned a target. But you can either manually choose your own target, or use a preset parameter to choose someone who’s likely to be the bigger competition. At any point during play, you’re able to select a target based on their stats: the amount of K.O.s they’ve have, or the amount of Badges they’ve won. You can also choose to target someone who is also targeting you. 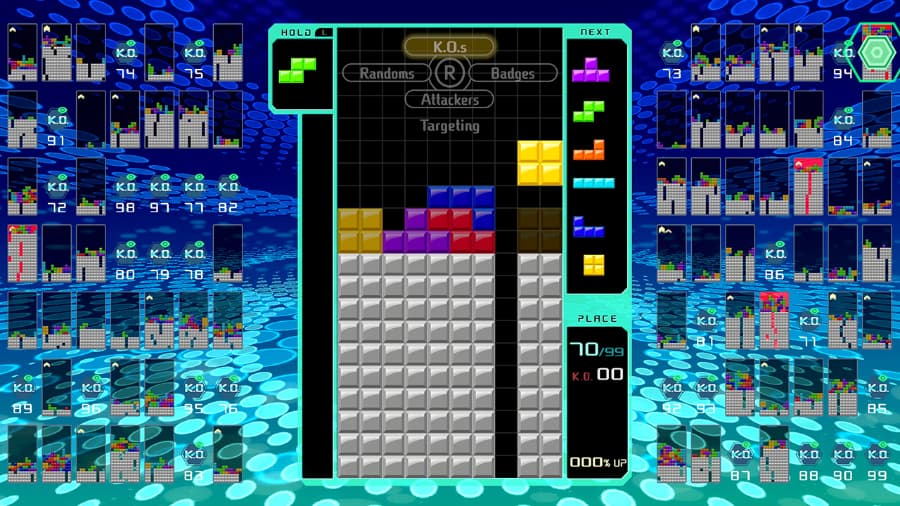 It adds a bit of strategy into Tetris 99‘s gameplay: targeting someone with a good record in the game is going to seriously hinder their chances of doing well – especially if multiple people also decide to target them.

And that’s where I found myself last night. On my first couple of games, I happily ignored everything that was going on around me, concentrating only on lining up my own tetronimos. I finished around #20 on my first go, but got down to #6 on my second. Not bad at all.

But my luck soon changed. Presumably as a result of my success, I was now a prime target, and on my third game I found myself instantly targeted by at least half a dozen players. Needless to say, it was Game Over in less than a minute. Damn.

I went on to play several more games, though, and how many people targeted me seemed pretty random. There may be times where you’re not targeted at all, but at other times four or five people may all be out for your blood. It’s all part of what makes Tetris 99 a battle royale game, I suppose.

It gets pretty brutal, especially when you get down to the last 20 or so players. As numbers whittle down, the speed that the blocks fall at ramps up, and keeping your cool gets harder to do. Tiny mistakes can cost you the game, so you need to keep your wits about you. It gets tense, let me tell you. But by god, is it fun. And once you start, it’s very hard to stop. With each battle lasting not much more than 10 minutes (much less if you mess up quickly), it’s all too easy to say “just one more game”. And before you know it, you’ve lost two hours to the damned thing.

The cherry on top of the Tetris 99 pie, though, is of course the fact that it’s free. Well, providing you’ve got a Switch Online membership – but presumably you’d need one anyway to be able to play it online. It’s a Tetris game that’s free! Even if you’re not big on the competitive aspect of it, being able to play a version of the classic game is a boon. But make sure to bring your A-game, because it’s a brutal world out there.