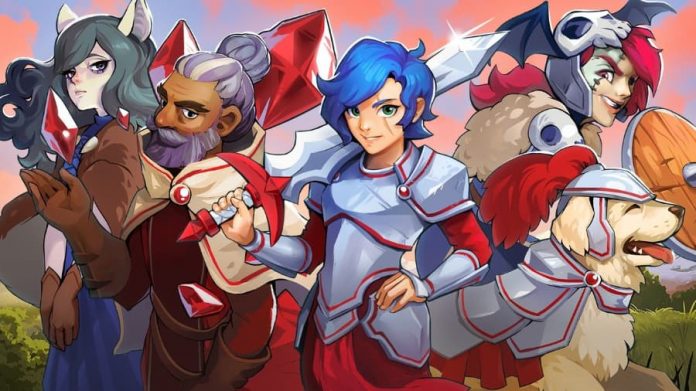 My journey with WarGroove went from admiring the art style, to cursing at it as the difficulty ramped up. It helped solidify my belief in my terrible abilities of a turn-based strategy game. But WarGroove possesses the best level editor I’ve seen.

Despite this review being for the PC release of WarGroove, I did not hesitate to purchase the title on Nintendo Switch too. The game certainly fits the Switch – in either handheld mode or hooked up to a TV. But on PC for this review, everything is inevitably a little bit easier to control with a mouse and keyboard. This pixel art turn-based strategy game from developer and publisher Chucklefish tempts you in with its art style… and dogs. Eventually, however, you hit a point where you can already tell in about three turns you’re going to lose, so you start the current level again… for the umpteenth time.

I’m not really a fan of dogs, Chucklefish, so it was a nice tr– OK, Caesar is adorable and I love him. When Caesar attacks, his attack animation has him bark to make two knights with crossbows have hearts over them, and then they do the fighting while Caesar sits at the back, or rolls over, or chases his tail. It’s not just those two knights who fall in love with him, because the player will too, and if you don’t you’re dead inside.

These attack animations for all friendly and enemy units are pivotal to WarGroove’s charm; paired with cutscenes at the end of each level, Chucklefish has managed to create great personality – most notably in the central characters of the campaign. The writing in these cutscenes gives life and character to Queen Mercia, her allies, and her enemies too. Mercia is the central character, caught between warring factions after the death of her father. She’ll encounter those factions along the way with her trusty companions, Emeric and Caesar, and establish new allies along her journey. 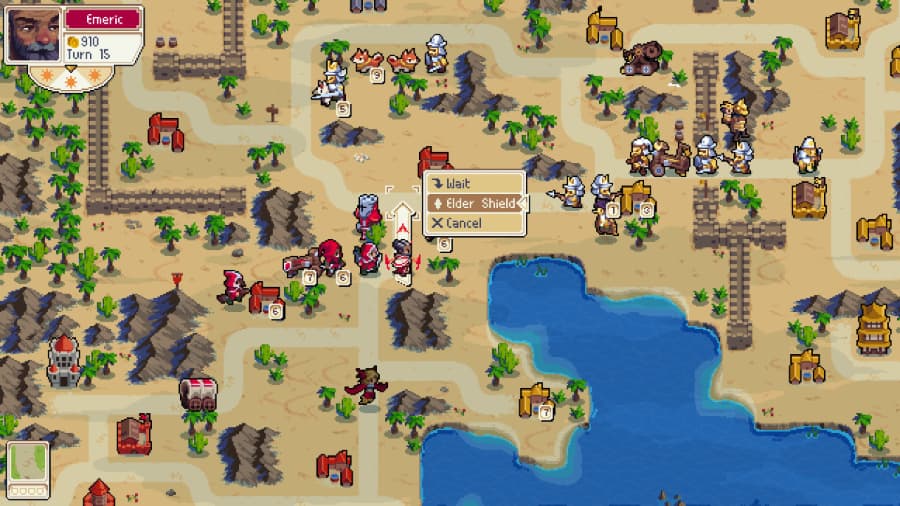 In each level you start with set characters, gold, and captured locations. To win a level you must either kill the enemy champion, or defeat the enemy stronghold. Occasionally, civilians need to be exported, or you must get to the other side of the level to escape the enemy. Capturing locations increases your gold income, and gold allows you to purchase more units, which is invaluable to the completion of any level. Each unit has a different price, and its own unique strengths and weaknesses. It’s all well and good to spend every gold coin on horseback knights, but if you’re up against pikemen you’re going to have a bad time, and that’s your own fault – pikemen are strong against knights and knights weak to pikemen. It’s all about finding a good balance. 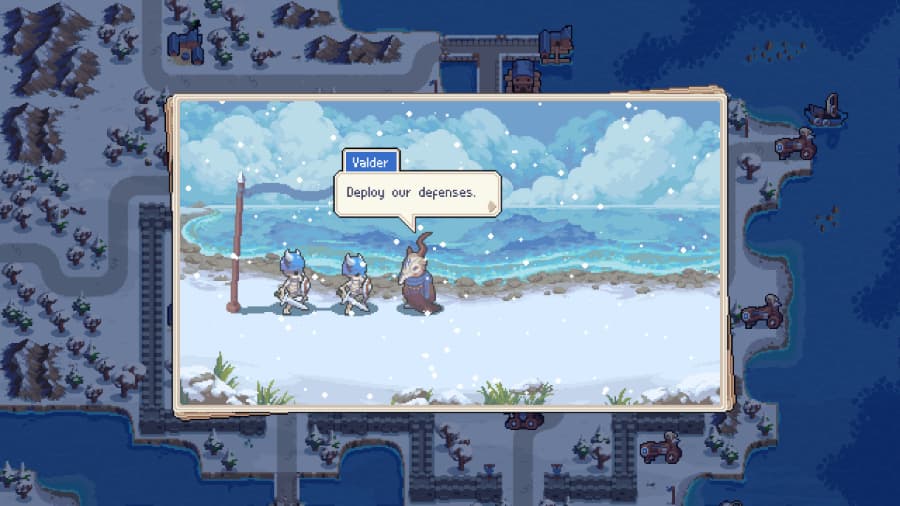 Chucklefish has gone all out with features on Steam. Every conceivable multiplayer is there: online multiplayer and co-op, local too including shared/split screen co-op and even cross-platform multiplayer. The best feature, however, in WarGroove is the level editor. Not only can you design every tile of a level, choose how many units you start with and how much gold etc., you can also design a whole campaign around them too. Any of these can be shared through the game for anyone to download and play themselves.

When I say design a whole campaign, I’m not being hyperbolic. You can choose which, what and how many locations are dotted around the overworld, and you can even create your own cutscenes in the same vein as how Chucklefish has done them. You can effectively create your own campaign with all the bells and whistles the main campaign has. The ease of this too is welcome; I made a cutscene including narration, dialogue, emoting, voice barks from characters, effects, backgrounds, music, the works. It’s essentially pieced together as a list of events that happen in order. The fact players will be creating their own entire campaigns gives WarGroove such a wide breadth of longevity. When creating that cutscene and starting on a level I had to stop myself as I could – and no doubt will at some point – spend many, many hours creating my own campaign and writing my own story. 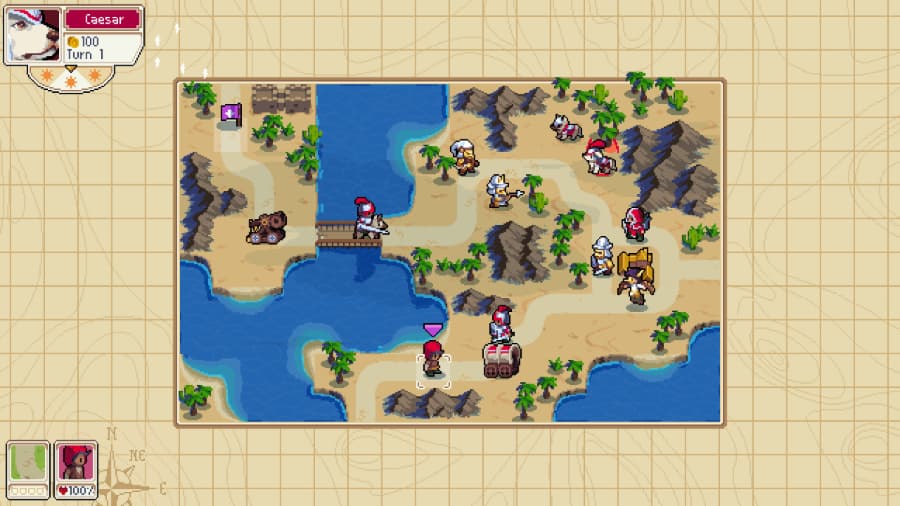 Any minor qualms I have with WarGroove are already being worked on by Chucklefish with a view to be fixed in the short term. The lack of tooltips was something that really frustrated me, but not only did Chucklefish announce it was already working on it, it showed a clip of it working in-game, and it’s everything I needed from that tooltip. Really, my only annoyances stem from sudden difficulty spikes, but simple difficulty adjustment sliders easily alleviate that unless you want to tough it out. The other is that dialogue at the start of a level will play through again the next time you start the level every, single, time.

But those are very small niggles that barely dent the excellent experience that WarGroove offers. It’s a game certainly worth its asking price, there’s no question of that. It packs in a challenging campaign, brought to life with characters that are hard not to love, but it’s the level editor that really sets WarGroove apart. If it’s your jam – like it is mine – then Wargroove offers literally endless potential. And even if level designing isn’t really your thing, it’s still a lot of fun to play around with.

Wargroove is available on PC, PS4, Xbox One and Nintendo Switch. We reviewed the PC version.