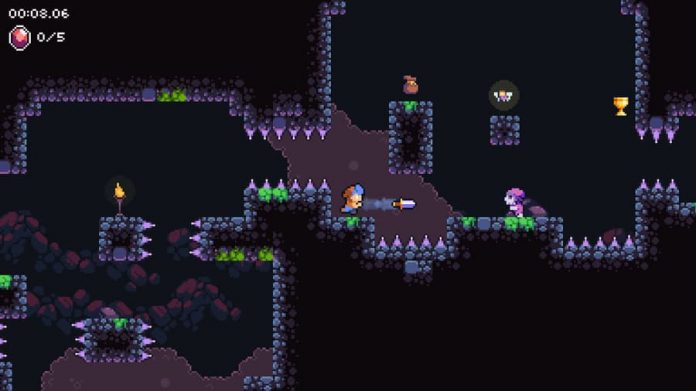 No loot is safe from Vincent S. Daggerhood. A prolific thief, but now caught and thrown into the caverns. This is merely an inconvenience to Daggerhood, as for revenge he seeks the King’s gold. It’s your job to get him there across 100 levels, but it isn’t going to be an easy ride to reclaim Daggerhood’s dignity.

Wall jumping, a teleport, spikes to avoid, blue hair, pixel art style – Daggerhood has got it all. Take Celeste, and then add a timed element to each level. From developer Woblyware, Daggerhood makes every level a race against the clock. With in-level challenges to collect treasures and fairies, too, it’ll be a fun title to watch at a future GDQ. For casual players, completing extra challenges is short-lived, and executing a level in a decent time is the number one priority.

Vincent S. Daggerhood’s most valuable resource is his namesake dagger. Using it initially throws it in the given direction, but using it again while it’s still travelling will teleport you to the dagger’s current position. Enemies and annoying critters along the way are between you and golden glory, so the dagger also neutralises threats.

Don’t be worried about restarting a level hundreds of times, as I’m sure I’ve been there. But considering a seamless run can see you complete a level in under 20 seconds, sitting there for upwards of ten minutes is a sure-fire way to destroy any self-esteem on my gaming prowess.

Daggerhood is available on PS4 (with PS Vita cross-buy), Xbox One and perhaps most suitably, the Nintendo Switch. For under a fiver, if you’re a fan of Celeste’s gameplay, there are very few reasons not to try Daggerhood.