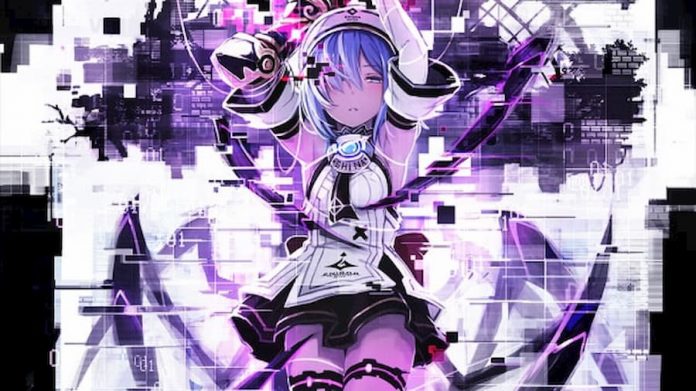 If you die in the game, you die in real life. Wait, have I heard that somewhere before?

In Death end re;Quest, you switch between multiple characters, but the main two protagonists are Shina Ninomiya and Arata Mizunashi. Shina and Arata are the two main creators of World’s Odyssey, a very popular fantasy MMORPG. Unfortunately, at its peak hype, Shina went missing, totally ceasing development on the game. After a year of being shut down, suddenly the game has resurfaced – but things are much different than before.

When you first start up the game and play through the prologue, you’ll awake as Shina. She has amnesia with no recollection of how she got there. Eventually, Arata gets hold of Shina, you do a little bit of battling and exploration (you know, tutorial stuff), and he explains everything to you. Arata, having known you in real life, is determined to find your real body so he can get you out of the game because – and it’s not the first time that many of us will have heard this – if you die inside of World’s Odyssey, you die in real life.

It’s a very similar concept as the popular anime Sword Art Online. The difference being that in Death end re;Quest, Shina and the World’s Odyssey game itself have been corrupted by bugs. And seemingly the only way to get out of this huge mess is to, you guessed it, beat the game.

When it comes to gameplay itself, Death end re;Quest has a lot of familiar RPG tropes while adding some of its own new elements. Each character has a health bar and magic bar as well as accessories and weapons that can be equipped for battle. Combat takes the form of turn-based strategy: you can move wherever you want in a closed-off area – the “battleground”, if you will. If your enemy has an advantage on you, they’ll be allowed to go first and you’ll have to wait to move, but if you’ve got the advantage you’ll be able to move wherever you wish. Then, you can use three skills on one turn in order to attack the enemy. Each spell you cast will use a certain amount of your magic bar (SP). If you’re out of SP or don’t want to use some of it, you can guard against an attack, use a melee attack or use items. 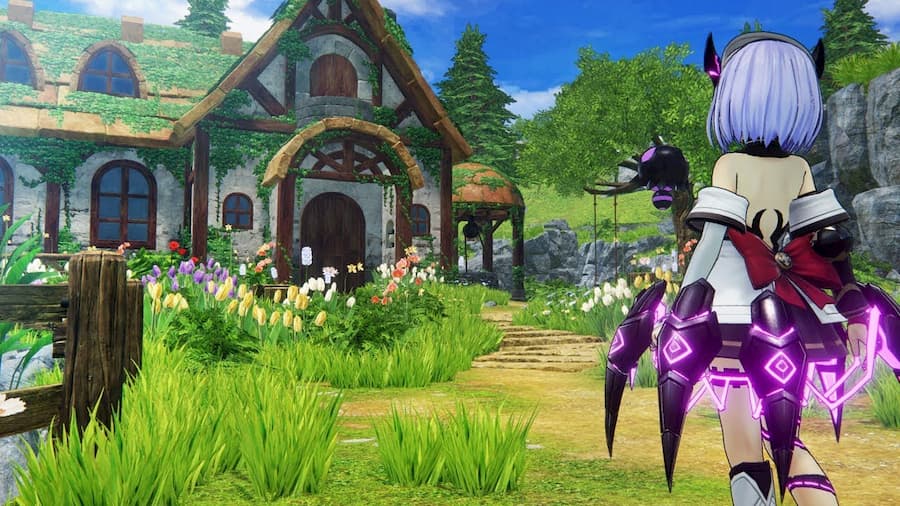 Each spell that you use does something unique, such as hitting multiple enemies or knocking enemies back. This makes it important to pay attention to where you’ve positioned your character in the battlefield. If you move them into the middle of three enemies and use a spell with a high area of effect, you’ll get much more damage out of your moves – but it leaves you more open for multiple attacks on the enemy’s turn. Like any turn-based combat, it’s all about strategising and coming up with the best course of action.

Another thing you’ll have to look out for during your battles are “field bugs”. Field bugs are strewn about the ground, and different bugs perform different functions. Bad bugs will stun you or your teammates, whereas others have the ability to renew your HP or SP. Hitting field bugs will enhance your corruption percentage, which in turn pushes you closer to your ultimate ability: a “Glitch”. If you reach 80% corruption you’re able to perform a hugely damaging ability – but you have to be careful because hitting 100% corruption kills your character instantly.

Something particularly unique to Death end re;Quest is that if you gather 50% of the field bugs in the battleground, you can summon Arata to help you in battle. He is able to put new code into the game from the outside world once during battle. He can summon creatures to help you and, most interestingly, he can change the genre of the game. He will literally change the code of the game so that the combat is completely different. It can become a first person shooter, a game of pinball or even a fighting game á la Mortal Kombat. This concept had me intrigued from the moment I discovered it, but unfortunately like most of the game, it left me pretty disappointed. The first-person game was especially clunky, the controls making it difficult to hit your targets, and the fighting game portions required only one or two button clicks to complete. The other minigames I encountered were also underwhelming and, though a great idea, weren’t executed well. 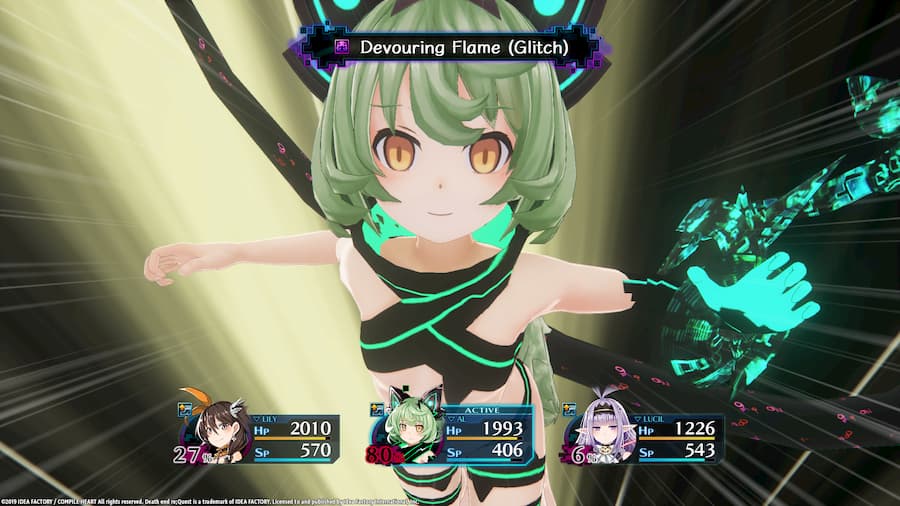 Now, apart from battles, you’ll be spending some time traversing through World’s Odyssey. It’s clear the game’s development just stopped in its tracks because the setting is pretty barren. At least, I hope that’s why the place is barren. In each of these exploration portions you’ll have to find keys to unlock doors in the area. There’s no way of knowing which keys unlock which doors, so you’ll quite possibly find yourself trekking through 20 minutes or so of gameplay just to end up at the wrong door. Then, you’ll find another key that you’re sure is the first door – but you’re wrong.

This will happen on a regular basis as many of the areas will have you collect five or six keys at a time, forcing you to backtrack more than once – heck, more than twice – to find the door the key is matched with. What I hate the absolute most about these free-roam sections of Death end re;Quest is that the characters run out of breath constantly. Even when you’re moving at their normal movement speed. It’s as though they’ve smoked a pack a day since they fell out of the womb. Sometimes I turned the sound to the game off just to get some respite from the constant loud and obnoxious heavy breathing.

When you’re playing as Arata back in the “real” world, things are a little less stressful. You’re trying to find clues to figure out how World’s Odyssey got back up and running and what might have happened to Shina. You’ll be able to talk with different people who might be able to help while hopping around on a overview of a map. This is the extent of his gameplay; most of the fast-paced combat happens in the video game world. 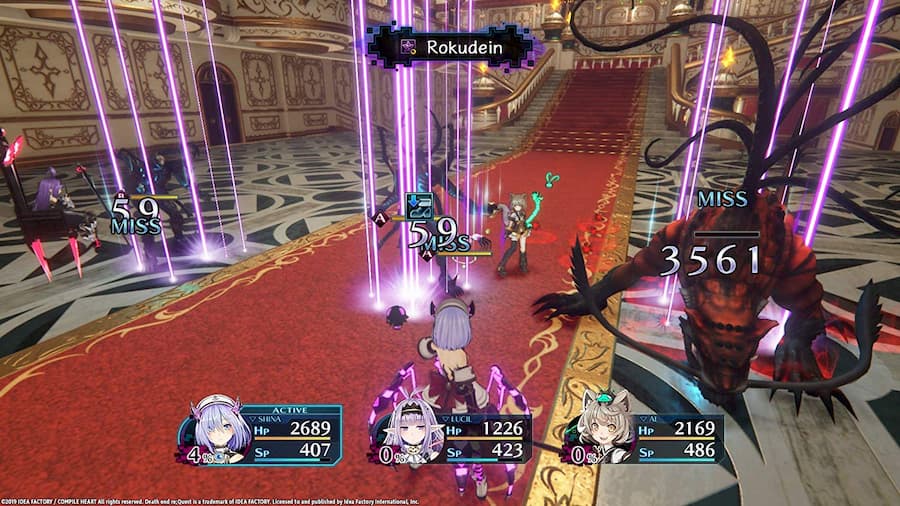 The English voice casting for the game is just okay, although Shina has a generic “damsel in distress” high-pitched voice, and Akata is overplayed at times. Some of the sub-characters’ voice acting, such as Sumika Tokiwa, was much better. Typically, I prefer switching to the original Japanese voices as I enjoy them more and don’t have to worry about weird translation problems, but in Death end re;Quest occasionally lines of Japanese dialogue aren’t subtitled, and I worried I’d be missing out on something important. Thankfully, the translation itself is impressive; I only came across one or two weird phrases.

With a runtime of around 40 hours, Death end re;Quest is likely to drive you up a wall if you’re used to polished and well-designed JRPGs. Passionate RPG lovers may overlook Death end re;Quest’s faults and see an ambitious title that flows well enough: it has a story told many times before, but with so many twists and turns you’ll be calling your chiropractor by morning to fix that kink in your neck. For most of us though, the frustrating world traversal, disappointing combat flourishes and all-too-generic gameplay will make it hard to find a reason to stick with Death end; re Quest.

Death end; re Quest is available on PS4.