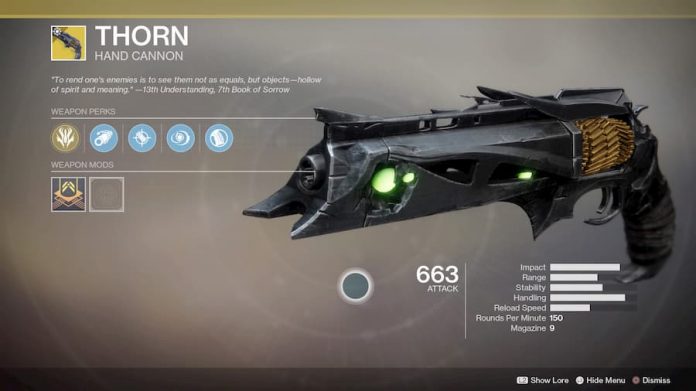 Season of the Drifter is now in full swing with the arrival of two major questlines to the world of Destiny 2: the Thorn Quest, and the Allegiance Quest.

Let’s dive into the path you must travel to earn the infamous Thorn in Destiny 2.

Before reading on, be warned that this will contain spoilers on the details of the Thorn quest – but that’s exactly why you’re here, right?

With that out of the way, let’s get into the thick of things.

First you’ll need to activate the Thorn quest by heading to the EDZ. You can find more information on finding the exact spot by clicking here.

With the Thorn quest activated, you’ll want to bring it to Banshee-44 at the tower. He’ll have some quips about the gun, and what he can and can’t do for you. This will initiate the bulk of the quest, which is as follows:

Blind Well isn’t as active as it once was, but Escalation Protocol is still fairly active and a quick way to gather Sapphire Wire. Once this is done, it’s time to really grind out the Crucible. Much like the quest from the original Destiny, it’s time to bust out Void powers.

You will gain increased progress for this portion from Competitive and Iron Banner playlists. Though this is true, keep in mind that Quickplay has more combatants (6 instead of 4) and the score cap is much higher. This will grant you a longer period of time to get the kills you need. Obviously, use your Destiny 2 character’s void class, and utilise weapons like the Kindled Orchid or Ikelos hand cannon, as well as the Hammerhead machine gun. You only gain 1-2% or so for every kill, so aim for those streaks. Once this is over, go speak with Tyra at The Farm social area. Afterwards, it’s time for the revamped Savathun’s Song mission.

Finish this absolutely brutal mission, and you’ll be rewarded with the beautiful Thorn weapon.

With the Thorn now in your possession, you’re ready to wreak havoc in the Crucible and cause the Vanguard to lose its mind once again. The gun, unfortunately, sounds a bit different and has lost its signature metallic clink from Destiny. It’s also got a new mechanic for the Mark of the Devourer, which now drops from killed enemies, increasing the Thorn’s lethality. As the Season of the Drifter continues, with Gambit Prime and Tier III Reckoning, we’ll keep delivering guides on what’s what.