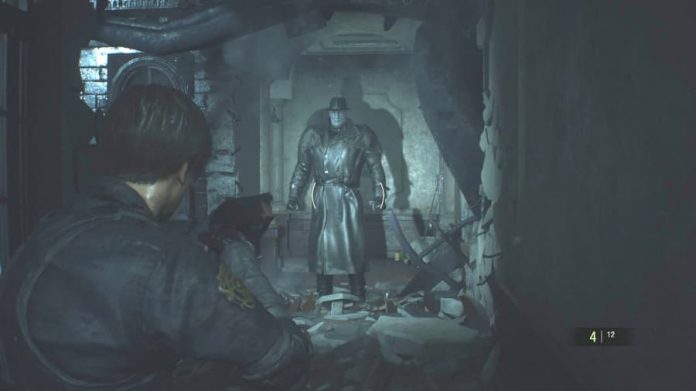 Resident Evil 2‘s Mr X might seem like your worst nightmare, but there’s no need to lose sleep over him.

The remake of Resident Evil 2 ramps up the original’s fear factor by having Mr X, one of the game’s two mega-enemies, pursue you through the game. Whether you’re playing as Claire or Leon, on your first or second playthrough, he’ll actively search you out, rather than only appearing at scripted points as he did in the original. Here’s ten handy tips to help you deal with him.

Even though Mr X is imposing, and can surprise you, he’s not that big of a threat until the one scene where you’re forced to fight him. He’s only slightly more damaging than a zombie. He’s more of an irritation and can easily be avoided when he shows up.

On your first playthrough, you won’t encounter Mr X until you’ve returned from the parking garage. There’s a ladder on the police station roof which may collapse when you go down it; shortly after you’ll have to put out a fire and when you do, Mr X will appear from behind the downed helicopter. So don’t go down that ladder till you’ve got at least one healing item handy. On your second playthrough you’ll encounter Mr X much earlier, before the helicopter. But once you’ve run into him, he’ll pursue you for most of the game.

The more noise you make, the more easily he’ll be able to find you. Though it’s tempting to just run everywhere, walking makes less noise and means he’s less likely to cause you a problem. Shooting also attracts him but it’s harder to avoid that.

You can use flash bangs to slow him down. You can also knock him down if you do enough damage; acid rounds are handy for this, but there’s really no point as he can’t be killed till the end of the game. He’ll come back again and again and you’ll have less ammo for when you need it.

Mr X is very slow and will, at best, walk at a brisk pace. The best way to deal with him is to get him into an open area and run round him. If you’re facing him in a narrow corridor you’re best off leading him to a less cramped place, such as a small room. But he’s only really a threat if you let him get close.

Mr X will eventually lose you if you keep moving, but the best way to lose him is to duck into a save room, one of the rooms that contains a typewriter and item box as marked on your map. He can’t follow you in there, though the main police station hall, which has both those items, is the exception. Mr X will happily track you down there.

In Alien: Isolation, you’d hear the Alien running through the vents even though it wasn’t really there and instead just spawned in randomly. In Resident Evil 2, on the other hand, Mr X’s footsteps do signal his proximity; the closer he is, the louder his footsteps are.

Even if Mr X is in a room, you can still place objects, such as the medallions, or complete puzzles without worrying about him beating you down. When you activate a puzzle time freezes and you’ll have as much time as you need to complete the puzzle. Back out, however, and he’ll still be there.

As Leon, you’ll have to take down Mr X at the end of the game. So make sure you have some ammunition left in your supply box because you’ll have to fight him shortly after taking out another boss. We’d recommend at least 12 shotgun shells and lot of bullets or a good few high powered weapon rounds.

The one good thing about Mr X’s appearance is that it’s an opportunity to get the “Hats Off!” achievement. To get this achievement, use a weapon to knock his hat off. The way we accomplished this was by firing a single acid round at his head. Doing this just once will also unlock him in Resident Evil 2’s model viewer.