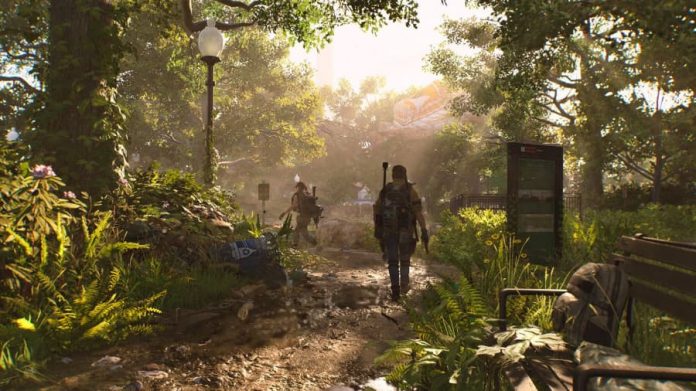 The Division 2 is a game that just sucks you in.

Hours just fly by whenever you sit down to play it. The only thing that eventually forces you to pull yourself away is the knowledge that you have other things to do. You know, like a job. Also, sometimes the servers get taken down for maintenance.

It’s not the story at the heart of The Division 2 what makes it so engrossing. In fact, The Division 2‘s narrative is pretty threadbare. You go from one place to another, shooting bad guys because that’s what you’re told to do; you’re essentially a soldier trying to regain control of a bad situation. But you’re also a mercenary, sometimes choosing to go off and do your own thing because you get a whiff of a sweet reward. And it’s when you’re a mercenary that The Division 2 really shines.

You’ll probably not care much for the characters barking orders at you while you’re making your way through the game’s main missions, but you’ll stop and pay attention to the echoes that you find out in the open world. They tell genuinely interesting stories, as do the audio recordings that you find. And there’s plenty of environmental storytelling, too. The world of The Division 2 – Washington D.C. – is so lovingly created, so wonderfully detailed, that it tells enough of a story itself to keep you invested.

Thankfully though, it’s The Division 2‘s gameplay that keeps you hooked. As third-person shooters go, it’s up there with the best of them. Its cover mechanics are robust, its weapons are varied and feel good to use, and enemy AI is mostly brilliant. There are times where your enemies do daft things, like climb up a ledge and then promptly climb back down again like they’ve just remembered they left the oven on, but most of the time they’re turned on and out for your blood. 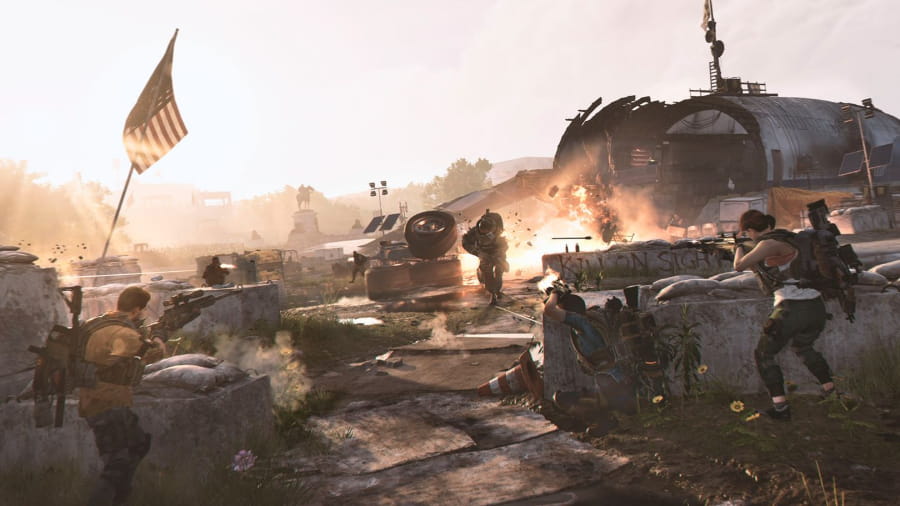 You have to keep your wits about you playing The Division 2, especially if you’re playing solo. Enemies will charge at you, try to flank you, and even make use of tools to make your life hell. Sometimes they succeed, but you rarely feel aggrieved – just outplayed. Unlike most cover-based shooters that are simply shooting galleries, The Division 2 makes you work for your victories. You have to use cover effectively, employ the right skills, and suitably gear up. Success isn’t simply handed to you on a plate.

The only time The Division 2 can perhaps feel a little unfair is when you’re out exploring the open world, alone. Many activities you come across on your travels are a one-shot affair, so if you die, your opportunity is forfeit. When playing as a team, chances are there’ll be someone to pick you up so you can complete the task at hand. Playing solo, however, your only option is to respawn back at a safe zone. Sometimes, that can mean retreading a lot of ground you’ve already covered.

Though of course, while The Division 2 can be enjoyed as a single-player game, it’s meant to be enjoyed with others. Being open to outside help will allow you to call for backup when you’re downed, and explore the open world more safely. Playing with a full team, there’s more room to strategise and breathe. You get things done quicker, and can have more fun with skills that aren’t quite as effective when playing alone. It really isn’t necessary, but playing The Division 2 with others enriches the experience. It makes it more wholesome. 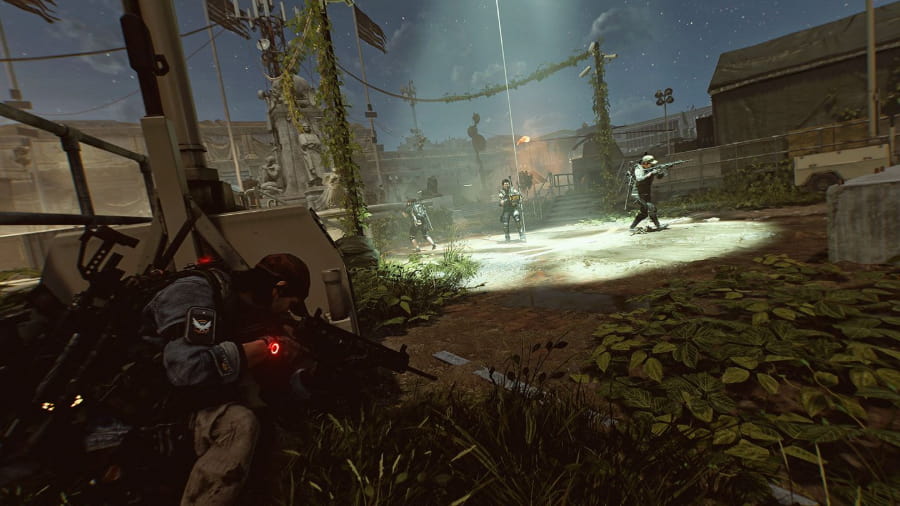 People won’t always be on your side, though. Wander into a Dark Zone and The Division 2 becomes an incredibly tense affair where motivations are rarely clear. Some players will overtly be out to kill anyone they come across in order to steal the loot they’re carrying. Others might be more sly, pretending to be your friend until they see an opening. But that’s what makes wandering into a Dark Zone so exciting; you never really know what’s going to happen – but there’s bound to be some great loot up for grabs.

And at the end of the day, that’s what The Division 2 is all about: loot. Great big piles of loot given to you for putting in the legwork or sticking your neck on the line. The quality of loot varies, and there are a wealth of helpful talents that can be found on them. Along with bonuses being given for equipping multiple items by the same brand, there’s a lot of scope for varying builds. Admittedly, lots of the loot you find will be useless to you, but you can sell it or break it down into materials, giving you more opportunities to get loot that is useful.

Completing The Division 2‘s main missions, which are essentially gated by level requirements, will take most players around 40 hours. That alone makes the game good value for money. Those who want to take over every control point, complete every side mission, and find every SHD Tech cache on the game’s map, however, will eke out another 10 hours or so. And then there’s the endgame, which is where the real game begins for some players. Along with the Dark Zone shenanigans, The Division 2 offers up hundreds of hours of gameplay for those who can’t resit looting and shooting ad infinitum. 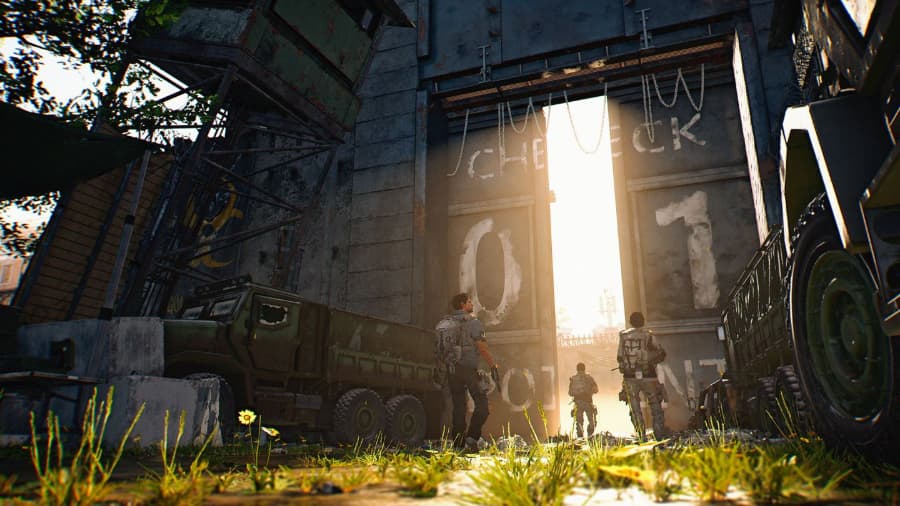 The Division 2 is undoubtedly the best loot shooter available right now. And that’s quite the commendation, considering the game has just launched. Unlike other recent loot shooters, it doesn’t feel like content has been held back for release at a later date, and nothing about it feels broken. It has some issues, sure, like armour scaling doesn’t currently work when playing with team members at a higher level. But many other issues have been hastily fixed, giving you the impression that Ubisoft knows what it’s doing with the game. It makes a good first impression, which is very important.

With all future content being made available to players for free, The Division 2 is a game that I can see myself going back to time and time again. It’ll vie for my time much like Diablo 3 does, because I just can’t resist the combination of exhilarating combat and meaningful loot. At times, The Division 2 does just feel like more of the same but with a new setting, but when it’s pulled off this well, who cares? In developing The Division 2, Ubisoft has taken what worked from the first game and listened to fans, creating a follow up that’s captivating and densely packed with things to do. If you like third-person shooters or love loot, it’s a must-buy.

The Division 2 is available on PS4, Xbox One and PC. We reviewed the Xbox One version.