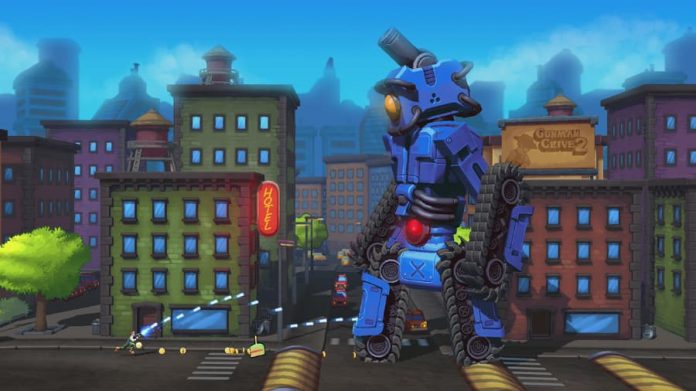 Take a game like Contra, remove all the bits that occupy the time between boss battles, and what do you get? Mechstermination Force. That’s what.

With just over a dozen gargantuan robots for you to overcome, Mechstermination Force is a boss rush shooter that feels like it has time-travelled from the 80s. And just to cement that 80s feel I selected an avatar with an uncanny resemblance to Rambo, though you can choose whichever you want from the four available. It doesn’t change the gameplay one jot. Basically, it’s up to you to shoot the weakpoints of the robots wreaking havoc on the world before smashing their vital bits with oversized melee weapons. You know, the standard stuff.

Initially, your options for bringing down your adversaries are rather basic. By collecting coins and progressing through the game, however, your options are expanded. New weapons can be purchased as well as health upgrades, and new gear is given to you which allows you to climb metal structures and double jump. I was having fun with my standard rifle, but when I unlocked the laser I just couldn’t stop grinning. Needless to say, the unlockables keep the action interesting, though so too does the sheer variety of the bosses thrown your way.

While they’re never quite as maddening as Cuphead‘s adversaries, the robots you fight against in Mechstermination Force put up a good fight. You rarely emerge victorious from your first scuffle with each of them. Instead, you learn from each skirmish, until eventually you’ve learned all of their tricks and tells and can tackle them with relative ease. It also helps that you can revisit previous enemies at will, amassing more coin that can be used to increase your health to improve your chances. You can even buy temporary hearts if you haven’t got a great deal of coin to spare. 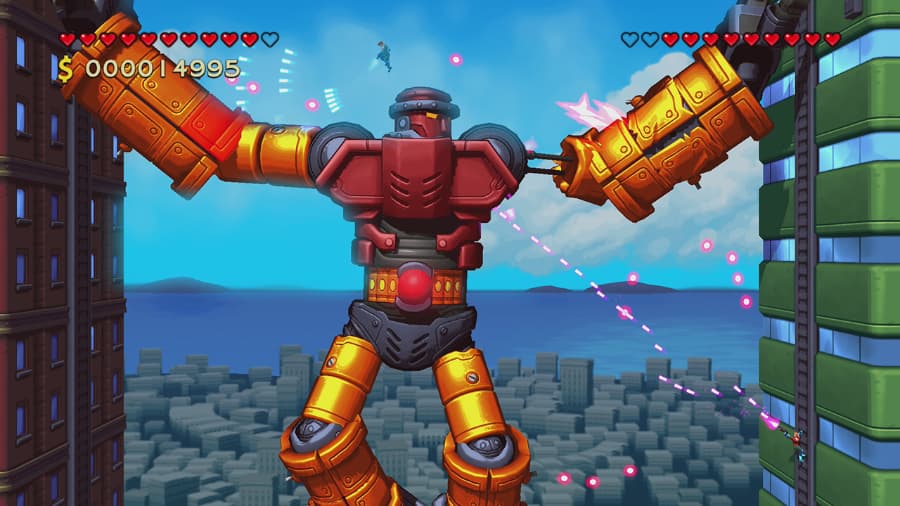 Needing to smash an opponent’s cores with a melee attacks is what adds a lot of strategy to Mechstermination Force. Do you try to destroy all of their armour or armaments before moving in for the kill, or do you chance it? Also, figuring out how you reach a core will sometimes be a conundrum. Many bosses play like mini-platforming stages. Think Shadow of the Colossus but 2D, and with guns. It transcends the game from just being a bog-standard shooter. You can’t just simply stand at the side of the screen and avoid an enemy’s attacks; you need to be proactive in scaling them to get within melee distance.

Obliterating robots isn’t something that has to be done alone, either. Mechstermination Force features local co-op gameplay, so you can tackle foes with a friend or family member by your side. It makes defeating some adversaries a hell of a lot easier, as well as adding to the fun. Everyone loves a bit of couch co-op craziness, don’t they? And did I mention that Mechstermination Force looks great in a retro-but-not way, and has a rocking soundtrack? It really does. 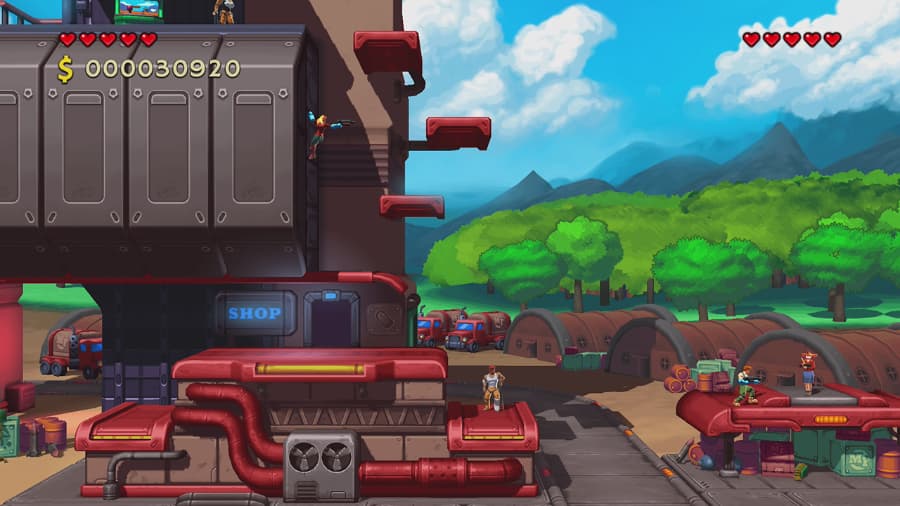 The only real blemish on Mechstermination Force‘s otherwise clean sheet is that its controls don’t always feel quite as tight as tight as they could be, particularly when it comes to climbing. Sometimes scaling your foes can be a little more fiddly than it should be, causing some frustration. Thankfully the brevity of each boss fight means you never feel too aggrieved when you’re cut down and it doesn’t particularly feel like your fault. You just pick yourself up and try again.

So it boils down to this: if you like systematically wrecking colourful but undoubtedly evil robots, you need Mechstermination Force in your life. Some minor control issues might pop up from time to time, but they shouldn’t sour your overall experience. Until all of its foes have been vanquished – which will probably take around five hours – you’ll have a hell of a lot of fun, especially if you have a co-op player by your side. Mechstermination Force is enjoyably challenging, reasonably cheap, and mildly humorous. That makes it a success in my book.

Mechstermination Force is available on Switch.