I sat down to enjoy a little bit of Tetris Effect earlier this week, but I just couldn’t enjoy it in the same way I used to.

I’ve long been a fan of Tetris. I’m not some kind of pro at the game, by any means, but I’m pretty good. It’s been one of my favourite games to play head-to-head for a long time, as it’s the only one I’ve ever a real chance of being victorious in.

In revisiting Tetris Effect on PlayStation 4, a game I’d previously loved, something just didn’t feel right. Where was the impending sense of doom? The threat of sabotage at any minute? Sure, the game speeds up once in a while, but it just wasn’t enough. I hate to say it, but without the frantic panic induced by Tetris 99, it felt kind of… boring.

Tetris Effect is still a gorgeous experience; there’s no rivalling its audio design or its visuals, both in and out of VR. But the experience of playing single-player Tetris, without knowing there are 98 other people out there, each determined to destroy you? It just isn’t the same. Damn you, Tetris 99.

There’s just something about the competitive element of Tetris 99 that makes it so much more exciting to play. Going through the motions of the game has always been enjoyable, sure. But Tetris 99 has turned that on its head, making it more frenetic than ever. I’m generally not a massive fan of competitive gaming, but Tetris 99 has its blocky hooks in me. The feeling of constantly being on your toes, waiting for an opponent to attack you, knowing that one tiny mistake will quite possibly cost you your life – it’s turned the experience of playing Tetris on its head. Not to mention the glee of the ‘ching’ sound when you’ve defeated an opponent. Oh, it’s magical.

But I never wanted it to be so enjoyable at the expense of other Tetris games. Playing Tetris Effect in a post-Tetris 99 world just isn’t the same. What about Tetris Ultimate? Puyo Puyo Tetris? Some of my favourite games have been ruined, thanks to this sweet, evil, magical, destructive game. 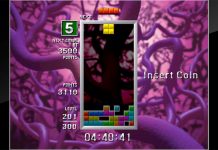 Tetris The Grand Master Drops Onto PlayStation and Switch Today