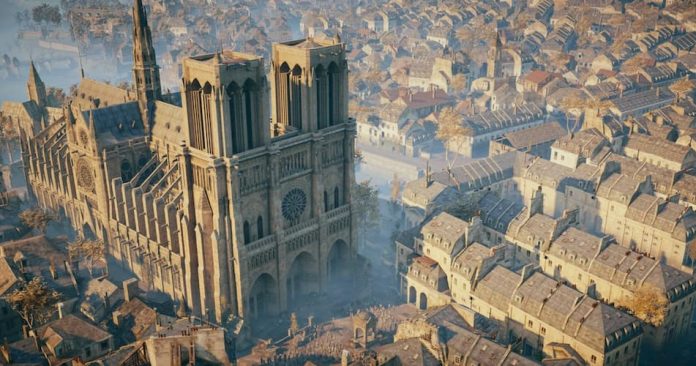 Horrific as those scenes were to see, Parisian fire fighters worked tirelessly to rescue the building. Despite a spire collapsing and the cathedral’s roof being catastrophically destroyed, much of the lower levels of the building remain intact. A restoration project is already underway.

An incredible one billion Euros has already been raised for the restoration project; numerous companies and corporations from around the globe have chipped in to help the iconic building get restored to its former glory. One such company is Ubisoft, who has donated €500,000 (around £433,000) to the cause.

The Notre Dame is a building close to the heart of developers at Ubisoft; 2014’s Assassin’s Creed Unity, set in France, features a 1:1 scale of the magnificent structure, recreated in beautiful detail.

And to honour the Notre Dame and to allow gamers the chance to experience the building up-close and personal, for the next week, Ubisoft is giving Assassin’s Creed Unity away on PC – completely free.

From now until 8am BST (3am EST) on 25th April, anyone can visit the Ubisoft webpage and claim a free copy of the game. It will be permanently added to their Uplay games library.

“In light of the devastating fire at the Notre Dame de Paris, Ubisoft wants to give all gamers the chance to experience the majesty and beauty of the cathedral through Assassins Creed Unity on PC.”

Grab it while you can by clicking here. Unity was one of the more poorly received games of the Assassin’s Creed series, largely down to performance issues and bugs on release. But after several post-launch patches, it soon became a joy to experience. Despite being nearly five years old now, it’s still an incredibly ambitious game. It features some of the most detailed environments we’ve ever seen, still to this day. The full-scale replica of Notre Dame speaks for itself – and is reason enough to give Unity a try.

If you wish to donate to the restoration efforts at Notre Dame, you can find out how to do so here.