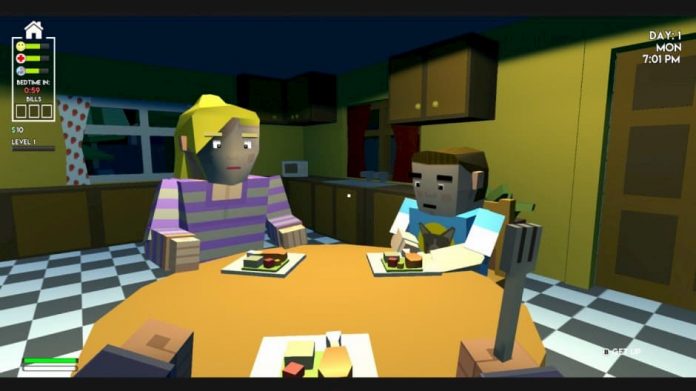 At EGX Rezzed last week, I sat down to a game in the ID@Xbox section called Family Man.

Awww, I thought, a sweet game about a man looking after his wife and kid. This will be nice!

My first tasks in the game confirmed this sweetness. In the shoes of the titular family man, I talked to my son, telling him how proud of him I was. I then tidied up around the house, mopping up a couple of spillages, putting away a half-eaten packet of crisps and washing some dishes. Domestic bliss.

Although, it quickly turned out that not everything is quite as hunky-dory for my family as it first seems. I’m out of a job, you see, so there’s no money to pay the bills or put food on the table. After I’d done a couple of chores, my wife asked me to head out into town in search of a job. How could I refuse? Off I went, promising I’d be home before dark, so I could tuck my son in to sleep. What a good dad I am.

Or at least, I can be a good dad, depending what decisions I make. As I wandered into Family Man‘s open town, the game’s true nature opened up to me. This dad’s destiny, along with his family, are fully in my control. The decisions I make while playing will directly affect not only my character, but his wife and son too. That’s a lot of pressure. 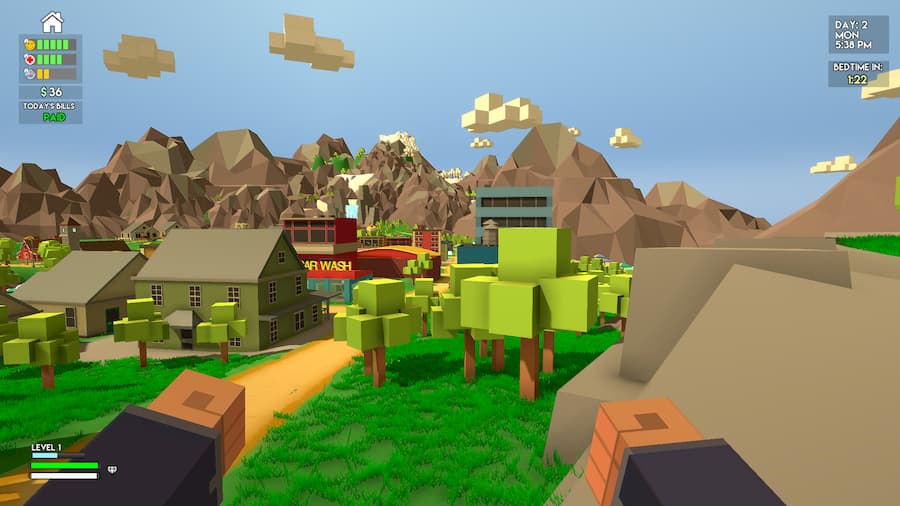 It only took thirty seconds of being outside to see Family Man take a dark turn. Passing by a neighbour, he looked like he needed my help. Turned out his ma wasn’t very happy with him, because he couldn’t get rid of some pesky rabbits out of the garden. He pointed me towards his baseball bat and asked me to go take a look. He was going to pay me, so of course, I obliged. Venturing into his yard, I saw a few cute bunnies hopping around, happily minding their own business. Then I bludgeoned them to death. Just like that. No second thought. Jeez, who am I?

My conscience a little cloudier than it was a few minutes before, I’d at least made enough money already to pay most of that day’s bills. So that was at least something to feel good about. But I needed something more permanent to earn some money other than battering bunnies. Coming across the town’s sheriff, he told me the local burger joint was hiring. Flipping burgers isn’t exactly glamorous, but it’s a honest living, at least.

But before I made it to talk to the restaurant’s manager, I found myself in a shady-looking alleyway, getting accosted by a thug. I couldn’t afford to give up the money I’d just made, so I did the first thing that came naturally: equipped the baseball bat I still had in my possession and knocked that dude to the ground. Whoops, he wasn’t moving. Oh well. I moved on, my money perfectly safe. 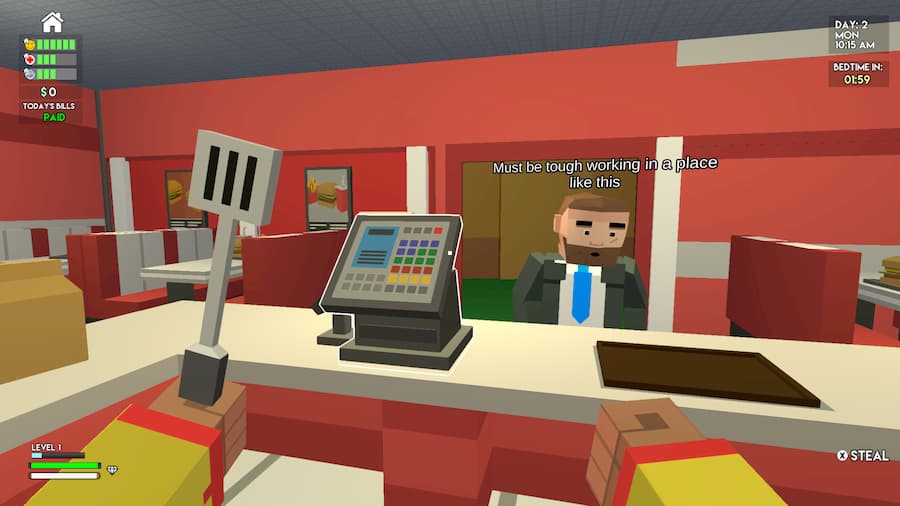 Nobody seemed to be around to witness my violent antics, so I think I got away with it. The apathetic burger joint manager – who’d given up on life, it would seem – certainly didn’t care and gladly let me behind the counter, offering me a job without so much as an interview. I served a few customers, cooking up burgers and fries like a natural. The manager must have been impressed – he offered me a shift whenever I wanted it.

And so, after my first day on the job as a burger flipper, I got home just in time to tuck my son in for bedtime. He told me I was the best dad ever, clearly unaware of the deeds I’d got up to just a few short hours before. Shortly after, my wife summoned me to bed, seemingly pleased I’d got a job and got back home on time.

In only about 20 minutes playing Family Man, I’d gone from being a wholesome helpful husband to the type of person who’d beat someone to a pulp in an alley. Perhaps it was strictly in self defence, but who really knows? In stark contrast to its bright and blocky Minecraft-like visuals, Family Man isn’t quite as family friendly as it would seem at first glance – and it’s all the more appealing for it.

It’s just instinct in a video game to resort to violence in order to progress, but when the video game in question puts you in the role of a father who needs to provide for his family, it makes you think twice about your actions. Who knows what’s next for my family man. Will he stick out his job at the burger joint and slowly become as apathetic as the manager who hired him, or will violence and petty crime become a more attractive and profitable way to earn a living? I’m not sure – but I’m eager to find out.

Family Man is set to release on PC and Xbox One at some point this year.