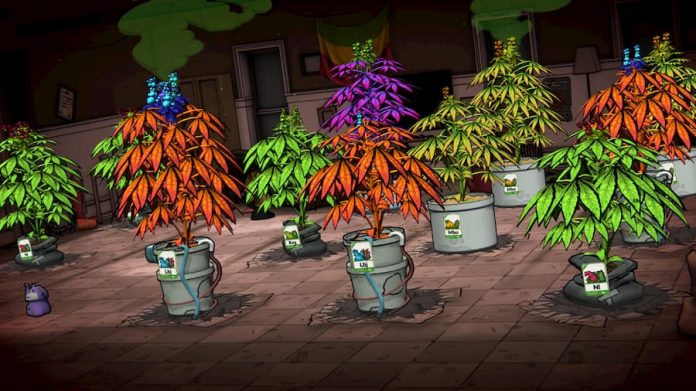 Rolling greens, to roll in them greens.

When making a game about growing and selling weed there’s a line between being self aware, and playing it straight. In this new sim game from developer Vile Monarch and publisher Devolver Digital, Weedcraft Inc opts for a more self aware approach. While its attempts at comedy often induce an eye roll, the financial aspect of Weedcraft Inc creates an interesting but often flawed game of supply and demand.

There are two scenarios in Weedcraft Inc which have their own stories. You’ve either had to leave your post graduate degree after the death of your father, or you’ve come out of a 15-year stint in prison for drug-related offences. You’ll start with the former and learn all the mechanics as you go through the story. Along the way there’s a lot to keep track of – weed growth, employees, finances, police vigilance, plant conditions, competition. Among these, the most engagement comes from finances. Often the main action of growing weed is akin to a mobile clicker game: pressing the water button when it’s off cooldown.

Most decisions in Weedcraft Inc involve choosing which weed to grow, and where to sell it for the most profit. There are various types of weed – “strains” – that you can grow. Often the game hints that you should be making several strains at any one time, but it doesn’t always seem financially beneficial, and focusing on one or two strains is easier to track and manage. At various points in the respective scenarios, you’ll unlock the ability to purchase a new strain with different effects that suit other demographics. There were some I never bought; I couldn’t always see a market for them, or they wouldn’t net me as much profit. 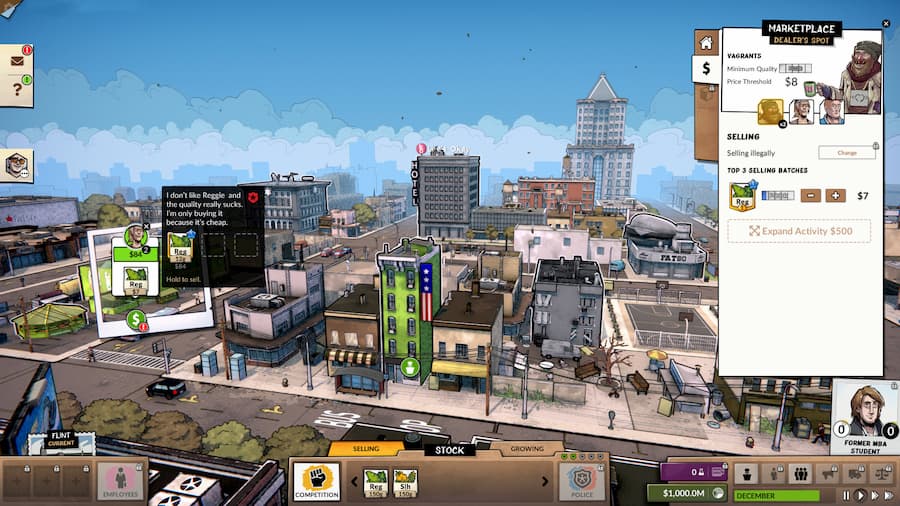 I was intrigued to see how a story would be implemented in a business sim game. Unfortunately progression in Weedcraft Inc’s story requires little more than a basic “make X money”, or “grow Y strain”. The progression leads you through new mechanics as you unlock them. In the first scenario it can take a while to unlock some of them, and a vague “this will become available later” is the tooltip for locked-off UI functions. Annoyingly, this includes the ability to grow and sell drugs legally, which is available relatively late in the first scenario.

In the first scenario you play a character who was working on a Master of Business Administration degree. But after your father’s death, you return to your hometown of Flint and team up with your brother to start a weed business. Here, my plan was to sell weed legally, but since this was locked off, I had to wait for quite some time. However, this did give me ample opportunity to get to grips with one of Weedcraft Inc’s main mechanics, police vigilance. Every time you harvest your strains, or sell some illegally, it will increase the police awareness of illegal activities in the area. Tracking this at first was an annoyance, but once you’ve managed to get legal fronts for all your owned locations, police vigilance isn’t much of an issue. And if you do go completely legal further into the game, this too negates any vigilance because, well, everything’s now above board. 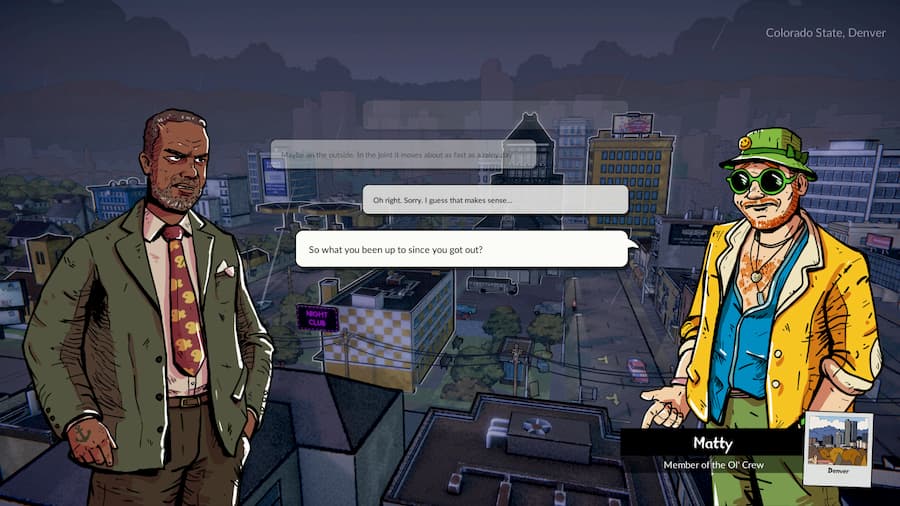 Lowering vigilance, growing and harvesting strains, and selling your product is mostly accomplished by holding the left mouse on an icon popup. Once you have employees you can get them to do it for you, but before then, clicking on every water icon, and every trimming icon is extremely tedious, and that mobile clicker feel seeps through. On the other hand, setting your employees to do it all kind of leaves you just sitting there, watching everything automate. Once your business is mostly automated by employees, Weedcraft Inc’s gameplay becomes more about deciding what you’re going to do rather than actively doing it.

Something Weedcraft Inc kept pushing at me was the need to talk to my staff, police officers and police commissioner, but it really never seemed to have much of an impact. Talking to my staff gave them more motivation, meaning they seemed to work slightly faster with less worries about competition – but the difference was negligible. Talking to people keeps them happy,  but it’s done very simply; chat with them to find interests then talk about their interests. It quickly becomes clear that there’s little to be gained from reading any of it, so you skip through it all and select what you know will make them happier. Conversations often delve into the American weed legalisation debate; ask someone about weed legalisation, and you’ll get a passionate response, regardless of who that character is. 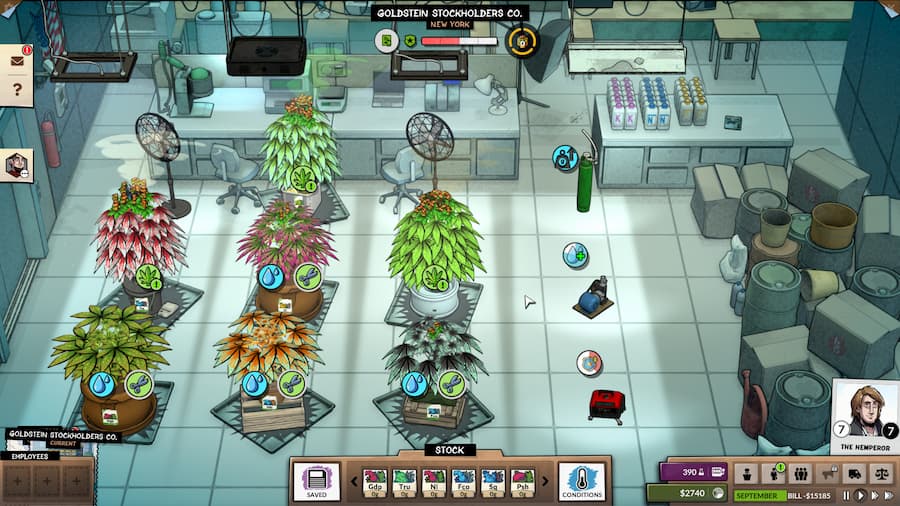 While Weedcraft Inc frequently sells itself on the political and cultural aspects of weed across America, it doesn’t really make a stand on either front. The guiding force throughout the story is simply whatever makes most money, and it’s only towards the end of the first scenario where Weedcraft Inc actively tries to have something to say. I won’t spoil it, but it delves a little bit into how weed can be used for medical reasons. This aspect appears earlier, but more in terms of financial logistics than a sense of duty; i.e. we could sell legally but we’d make less money. Legal, medicinal uses of cannabis in Weedcraft Inc stretches as far as treating epilepsy, cancer, and PTSD patients. More focus on selling weed legally would have made for a great opportunity to greater delve into helping each location’s community, but the game is far more interested in the finances.

The business and economical side of Weedcraft Inc can be engaging; mostly, this is when mulling over all your strains. But the game’s attempts to be political often don’t land as intended – for example its coffee shop named “Covfefe” is merely eye roll-inducing. For those that eke fun out of balancing profits against supply and demand and don’t mind a bit of repetitive click-work, then Weedcraft Inc may well be engaging enough. But for everyone else, its divisive subject matter is mostly wasted on dull gameplay mechanics, so if you were hoping for an engaging and edgy management sim, you’re still better off looking elsewhere.

Weedcraft Inc is available on PC.