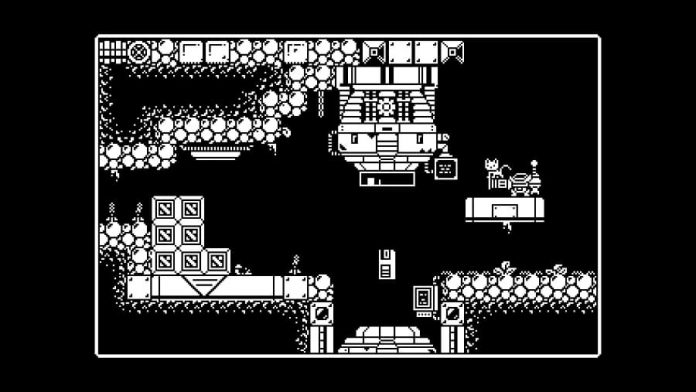 Cats are little shits. I know, I share a house with two of the little critters.

Perhaps that’s why the intro of Gato Roboto, a metroidvania landing on Switch and PC in the near future, resonated with me. See, nearly every morning, I have the pleasure of a cut jumping on my desk and walking over my keyboard. While in my case the worst that happens is an email or two gets deleted, in Gato Roboto, the attention-seeking cat causes a spaceship to crash, leaving its captain stranded. But then something amazing happens: the cat actually becomes useful. It tries to save the day.

Honestly, the cat in Gato Roboto is a treasure. It may have been the cause of your predicament, but it’s ready to head off into uncharted territory on its own in order to save you, its caring owner. “But what can a cat do?”, you’re probably wondering. Well, not a great deal, really. But once in control of a mech, it can kick ass. Though you’ll probably not see it chewing any gum.

With its pixelated black and white visuals, Gato Roboto looks like a game you might have played 30 or so years ago. But its animation is a notch above that, giving its feline protagonist and the hostile creatures you encounter a decent amount of character. It’s the gameplay that really shines, though. Gato Roboto may look like an old game but it doesn’t really play like one. Like the brilliant Axiom Verge, it provokes nostalgia while providing a modern day metroidvania experience. 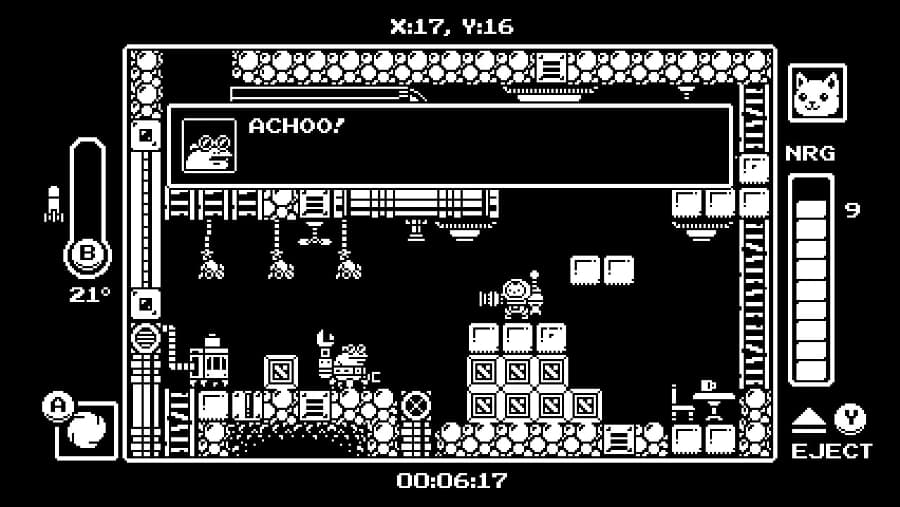 Its controls are crisp and responsive, and there are upgrades to be found that increase your chance of survival. Playing Gato Roboto is simply just a pleasure. In your mech suit, you can shoot projectiles in four directions, although they don’t travel very far. It isn’t long until you unlock a new, more powerful weapon though – rockets, and they not only allow you to decimate enemies at a longer range, but also destroy certain blocks halting your progress, too. And you can use them to give you a little boost when you jump.

While you have unlimited ammo with both of these weapons, a temperature meter ensures that you can’t just rocket-spam your way to victory. Fire a few rockets in quick succession and you’ll have to wait for the mechanism to cool down, forcing your usage to be measured. In fact, Gato Roboto‘s difficulty seems to be pitched just about right. It’s certainly not a cakewalk, but thanks to frequent checkpoints no challenge seems to be overly frustrating. Only the game’s first boss has caused me to curse under my breath up to now, but after learning its attack pattern, I took it down with ease.

Like any good metroidvania, what really keeps you hooked when playing Gato Roboto is the feeling of exploration. Pulling up your map, you can see all those places that you haven’t christened with your paws yet. Just what secrets do they possess? Maybe some upgrades? And how you traverse Gato Roboto‘s world feels varied. In your mech suit you’re essentially a walking tank, and with that comes limited movement. So sometimes it’s necessary to climb out of the suit to explore to broaden your horizons. 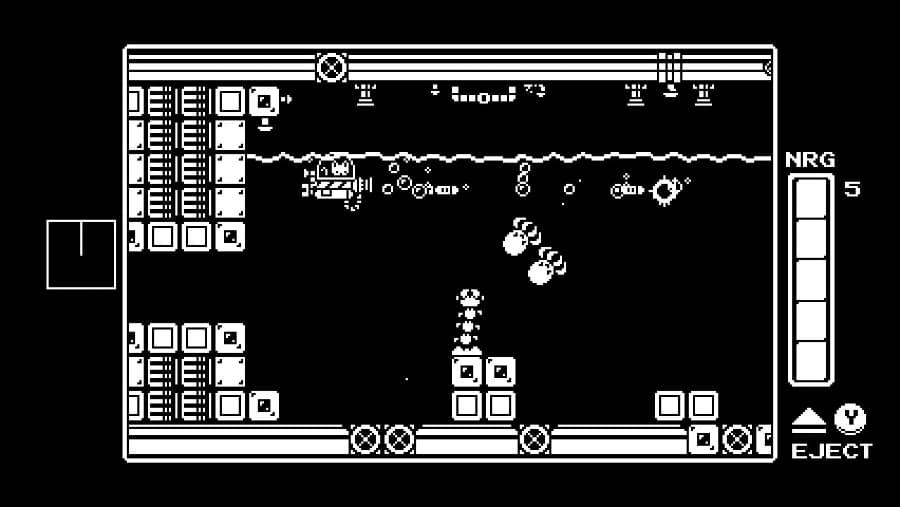 As a simple cat you can run up walls to reach higher ground, fit through tiny gaps to discover new areas, and also swim underwater. I told you the cat was a treasure. But without your suit you’re harmless, and can’t perform certain actions such as opening doors. The mech suit isn’t the only contraption you can pilot, though. Travelling into the aqueducts, you’ll find that you can jump behind the controls of what is essentially a mini submarine, too, giving you a fighting chance while underwater. Are there any more machines waiting for us to jump into them and have our merry way in the future? I hope so.

Up to now, Gato Roboto is everything we expected from a metroidvania featuring a cat published by Devolver Digital, then. It’s got style and humour, but none of it comes at the expense of solid gameplay. And despite adhering to the typical metroidvania formula, it feels wholly original, too. How many other games let you play as a cat in control of a mech? Whether you’re a fan of the genre or simply love cats, Gato Roboto really does need to be on your radar. Cats may be little shits, but life would be much duller without them.