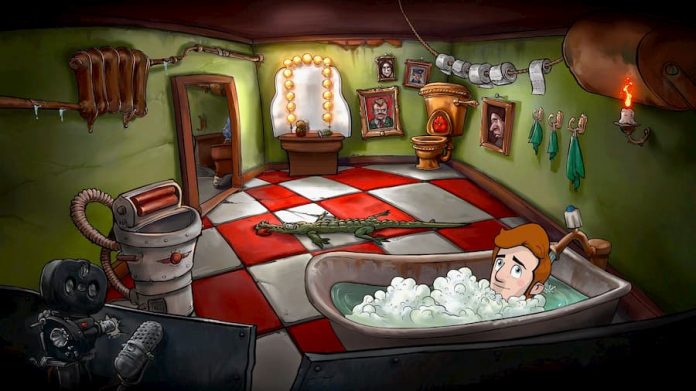 Does this really need to be so complicated?

That’s a question you’ll ask yourself a lot while playing Irony Curtain: From Matryoshka With Love, whether it’s when you’re trying to work out how to fill in the official form for bathroom access or executing a delicately balanced multi-trade involving vodka, ration cards and some hastily improvised perfume. And the answer is yes, of course it does.

Irony Curtain is Artifex Mundi’s love letter to the point and click genre after all, where such complex and faintly ludicrous puzzles are a key part of the form. But there’s also a deeper reason: Irony Curtain sees Polish developer Artifex Mundi step away from the fantastical hidden object games it has become known for, instead turning inward, making a game that’s heavily informed by the developers’ experiences of growing up in communist Poland. It uses the form of the point and click genre to explore the often absurd bureaucracy of communist rule. What emerges is a satire that’s both cutesy and rapier sharp, and which never forgets the fact that there were serious, deadly consequences to this often farcically hilarious state of affairs.

The main character, Evan Kovolsky, is the perfect figure for exploring the contradictions and double speak of Matryoshka, the fictional communist country where much of Irony Curtain takes place. Evan is a hero very much in the mould of Guybrush Threepwood from Monkey Island; a witty, trusting and often oblivious figure who’s in love with the communist ideal and has taken a deep, hearty gulp of Matryoshkan Kool-Aid. Contacted by the mysterious Anna, he jumps at the chance to visit Matryoshka, leaving behind his comfortable lifestyle in the US suburbs and, needless to say, finding a place very different to his imaginary ideal of a communist utopia. 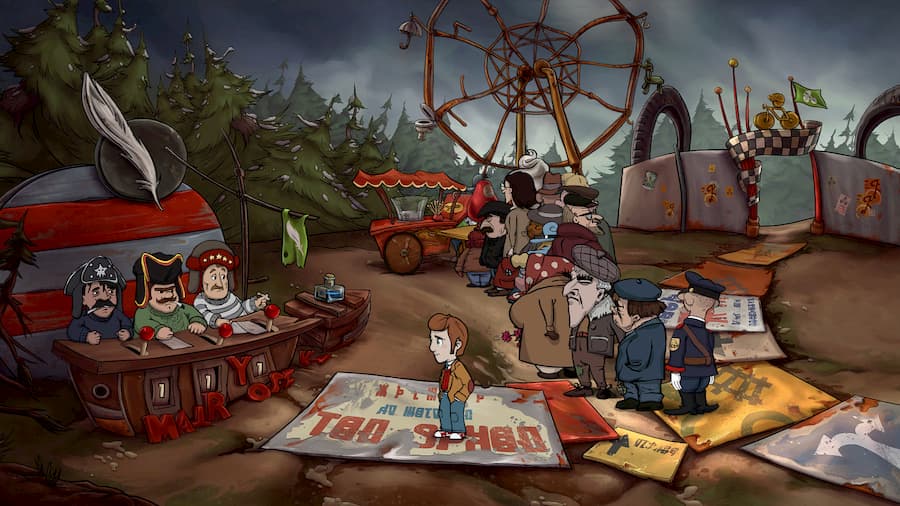 He’s voiced by Christopher Ragland, an experienced pro who has been in everything from Horizon Zero Dawn to Thomas the Tank Engine. His performance really brings out Evan’s often contradictory personality; he’s essentially a coward whose cheery disposition and often clueless bumbling can occasionally seem like absurd self confidence. In the great point and click tradition, the funniest lines are often from his internal monologue. Suggest an incorrect combination of items for example, and he might respond with “I’m glad nobody saw that” or “that’s straight out of my favourite book: How not to use items”. Somehow, he stays both amusing and likeable through the entire game, a rare feat for which the writing team deserves serious kudos.

It’s typical of an attention to detail and sheer dedication to quality that runs through the entire game. As Irony Curtain progresses, you and Evan gradually learn more about Matryoshka, through the main story, random conversations and clicking on pretty much everything in sight. It’s an activity that’s always worthwhile, with every click producing an entertaining and/or informative response. It’s a game full of in-jokes and tributes to the likes of Monkey Island and Grim Fandango, as well as clever acronyms like the “Knowledge Information Delivery System” – aka a child in a cardboard box who helps you get your head around the Matryoshkan underground network.

Irony Curtain’s distinctive tone is matched by its art style. The 2D levels that Evan traverses often look like they’re lifted straight from a communist comic book, with bold colours and thick black lines. Viewing objects in the inventory often shows clever little details, like warning stickers or a gun being stamped with “007”. The game also features animated cutscenes, which really bring home the overblown nature of proceedings.

So, Irony Curtain effortlessly ticks a few of the boxes for point and click greatness: it looks gorgeous, has a great story and, through its excellent writing and voice acting, is consistently very funny. The only real blemish comes in the logic puzzles, the various combinations of items and behaviours required to progress through the levels. Most of these are logical, clever and intuitive, but a few have solutions that, while not quite insane, at least requires the sort of faintly absurd reasoning that leaves you thinking “well, I guess it could just about work”.

Basically, if you complete Irony Curtain without a walkthrough, then I take my hat off to you. It’s a real shame as, in many ways, Artifex Mundi has gone out of its way to make this a welcoming point and click game, with one key press revealing all the objects you can interact with, and almost every level featuring an (often very funny) “ideological support” telephone line that can be rung for hints. Even with the built-in help, some of the puzzles though just feel like a logical leap too far.

Overall though, Irony Curtain: From Matryoshka is a unique triumph, a game that offers a fresh take on a well-trodden genre that’s far funnier than a game about communist history has any right to be. It manages to feel incredibly polished without losing that distinctive indie touch; the feeling that you’re playing a distinctly authored experience that hasn’t been focus-grouped to oblivion. Be prepared to think outside the box, but make sure you check out this beautifully constructed and often hilarious adventure that’s sure to delight anyone who loves a good point and click game.

Irony Curtain is available on PC.