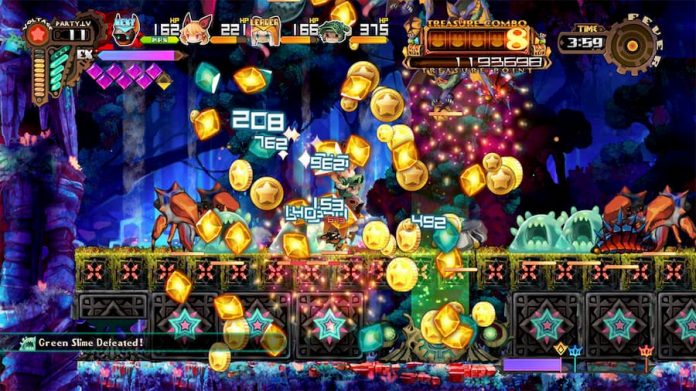 Like your 2D hack-and-slash games so crazy you’re not quite sure what’s happening on your screen? Look no further than Lapis x Labyrinth.

Fresh out on Nintendo Switch from NIS America, Lapis x Labyrinth‘s tagline tells you pretty much all you need to know: “Stack, Raid, Get Paid!”. Put in control of a team of four adventurers, you’ve been tasked to help your town recover from bankruptcy. The way to do that? Make your way through a series of dungeons, kill some enemies, and get rewarded with a whole lotta loot. It’s pretty straightforward in theory, but playing Lapis x Labyrinth is pure, unadulterated chaos.

Taking a leaf out of the book of World of Final Fantasy‘s combat, your four heroes will explore and fight while stacked on top of each other. Each character has their own strengths and weaknesses, so the order in which they’re stacked will affect how you perform in combat. The character on the bottom, for instance, denotes whose special move you’ll perform. But when you’re in the heat of combat, you’ll likely not know (or care) who’s stacked where; everything is just too crazy to see.

You see, each dungeon you complete in Lapis x Labyrinth is short and sweet: you have a maximum of five minutes to find the exit, killing as many enemies and collecting as much loot on the way as possible. As you progress a meter will fill, and once it’s filled you’ll enter Fever mode. In Fever mode, gems spew from all over the screen; it’s a sight to behold, but god help you if you’re actually trying to pay attention to what’s going on. Fever mode happens fairly frequently; so frequently, in fact, that it’s mostly pointless trying to pay attention to the meter. Just let the madness wash over you. It’s really the only way. 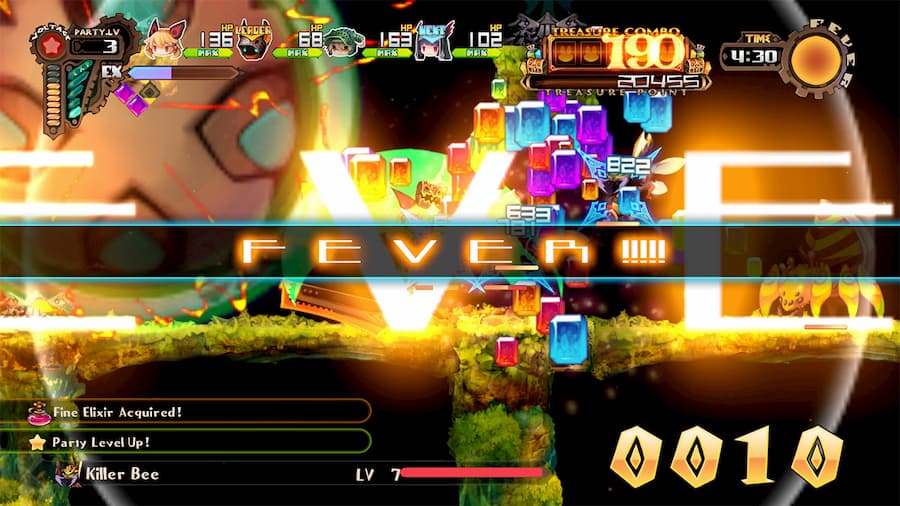 But even without fever mode kicking in, Lapis x Labyrinth‘s action is rather frenetic. Rarely will you come across a lone enemy; more likely, you’ll stumble into an area packed with dozens. Enemy types are varied, and your numerous attacks – even if you simply resort to pushing a lot of buttons as quickly as you can – means combat is far from dull.

What really brings Lapis x Labyrinth to life, however, is the sheer amount of loot you get. Holy crap, so much loot. And we love loot. Along with the gems that fill your screen in Fever mode, you’ll get weapons and equipment for your party as you play. Some of it you’ll find it chests, which are generously distributed throughout each level. Some you’ll be randomly rewarded with for killing enemies, and some you’ll be given as a reward for completing the level. In short, you’re going to have far more loot than you know what to do with. 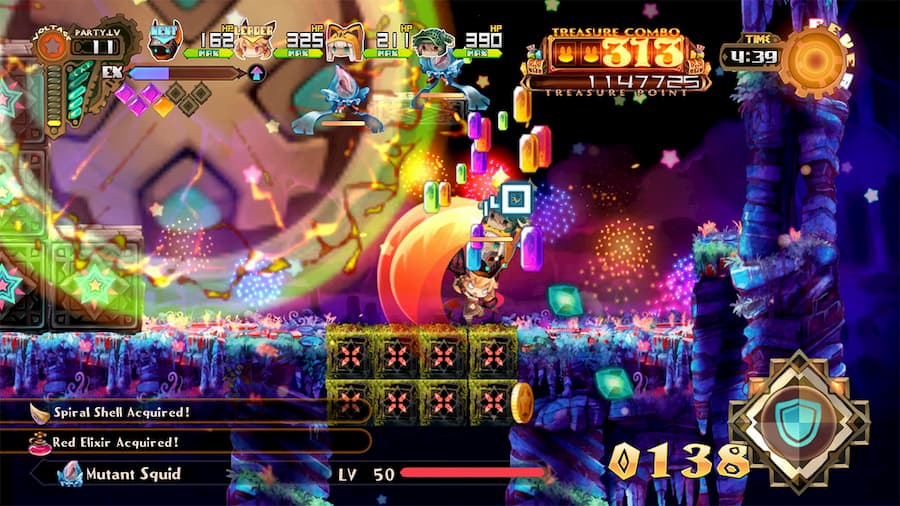 Although your party is made up of four heroes, there are eight in the game for you to choose from. It means that some pieces of loot that drop may not be useful to your current party members, so between levels expect to spend a lot of time sorting through your inventory, seeing what new items are worth keeping, and what is worth trading in to the shop. In the town hub between adventuring, you can also upgrade your equipment, change your party lineup, buy snacks for temporary stat boosts, and purchase upgrades to your party by trading in your hard-earned treasures. It packs in a surprising amount of customisation and depth for those who want to cultivate their party perfectly.

But somehow, none of that really seems to matter once you’re in the middle of a level. Sure, equipping the best weapons and equipment is necessary to defeat higher-level foes, and improving your party’s stats is always a must, but in the heat of a battle, you can’t help but feel like you aren’t really in control. It’s both a blessing and a curse; it’s hard not to grin maniacally when you’re in the midst of Fever mode, but it would also be nice to feel like you’re putting out a well-choreographed chain of attacks. Instead, it mostly feels like you’re bashing the attack buttons, hoping for the best.

If the thrill of collecting loot and the joy of upgrading your party is enough for you, then definitely make sure Lapis x Labyrinth is on your radar. If you hope for a little depth in terms of narrative development and refined combat, you won’t find it here. But you will find a lot of chaotic fun. With its bite-sized levels and constant rewards, it’s the perfect game to pick up and play in short bursts on Nintendo Switch.

Lapis x Labyrinth is available on Nintendo Switch and PlayStation 4. We reviewed the Switch version.