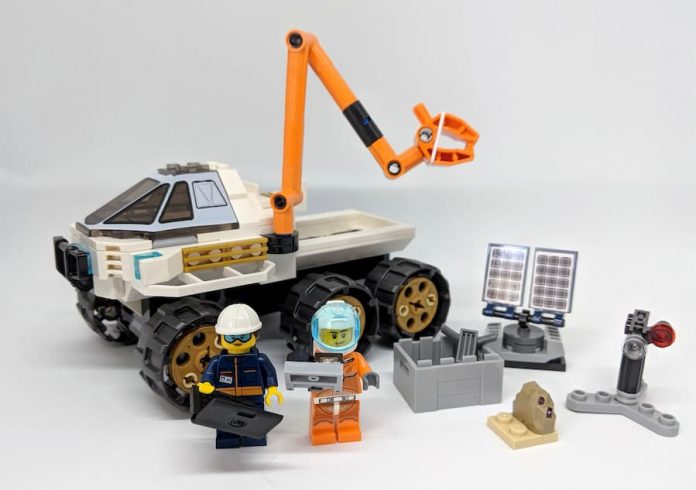 The newest wave of LEGO City is taking things back to space in a big way.

One of the smaller of the new LEGO City space models is 60225 Rover Testing Drive. Priced at £17.99, it includes a NASA test rover vehicle, two minifigs, a standalone solar panel structure, and a few other bits and bobs to make this a worthwhile playset. 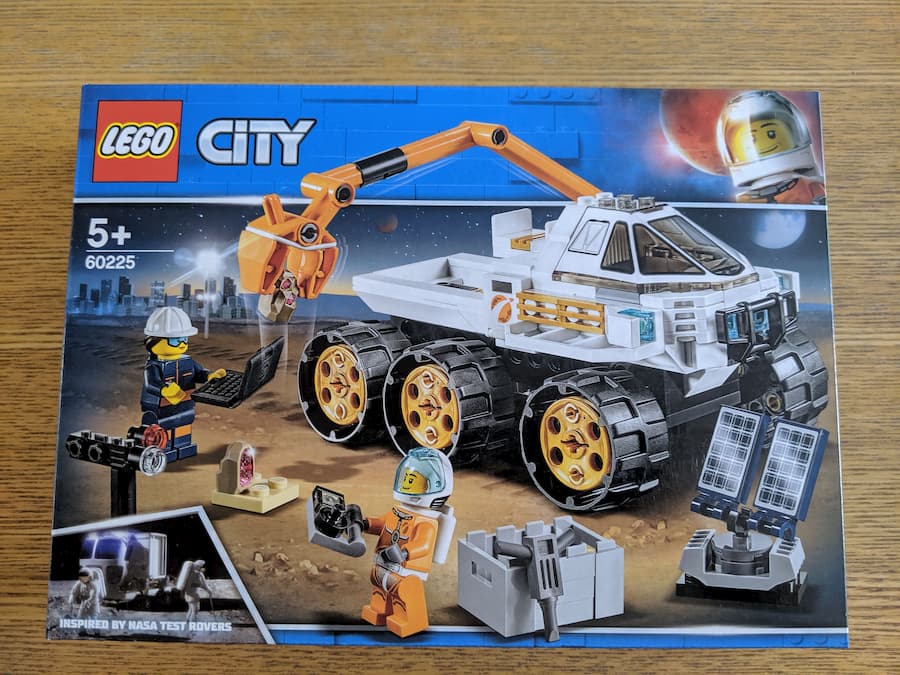 As you’d expect for £17.99, the LEGO Rover Testing Drive isn’t the most comprehensive or complex Lego builds. In fact, marked with age 5+ on the box, it’s one of LEGO’s easiest builds outside of its Juniors (4+) range. Don’t let that put you off though. While it is predominantly a playset aimed at younger builders, there’s still a great deal to like about 60225.

It’s inspired by actual NASA vehicles, for one. Albeit a very loose representation, there’s a page in the instruction booklet showing the LEGO Rover Testing Drive next to an actual NASA vehicle. Of the two minifigures included, one is wearing the signature orange spacesuit and is equipped with a more realistic-looking helmet. It’s a nice change from the older style astronauts we’re used to seeing. 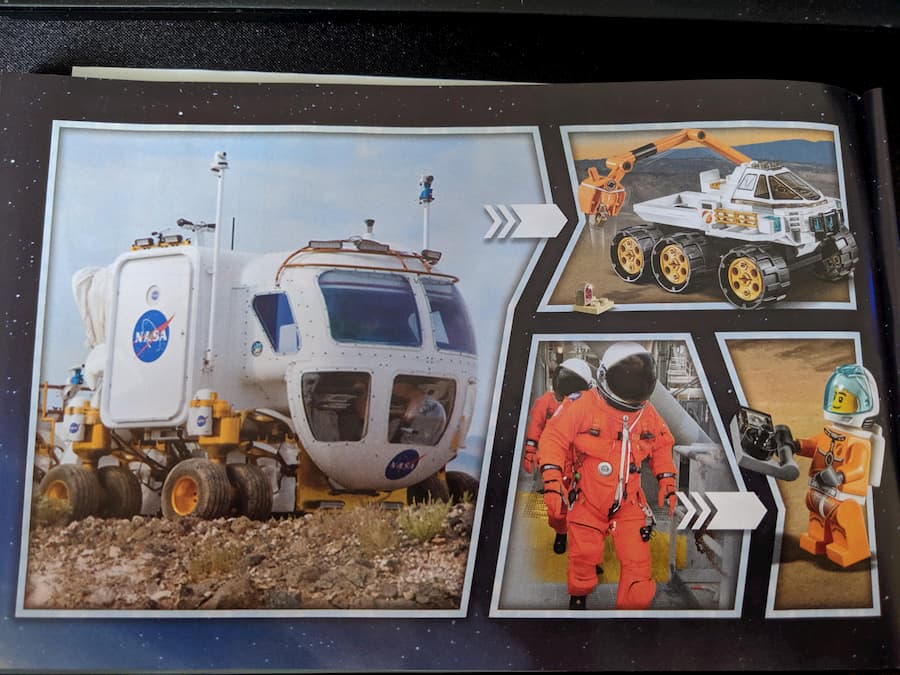 The second minifig in the set is a female engineer. Both come with printed torsos and legs, and both have subtle printing on their backs, although you can’t see the astronaut’s as it’s hidden behind its oxygen tank. The female minifigure comes with a hardhat and hair combination, and has printed goggles on her face. Of the two, she’s my favourite. The astronaut’s face, on the other hand, is more of a basic City-style figure underneath his helmet. 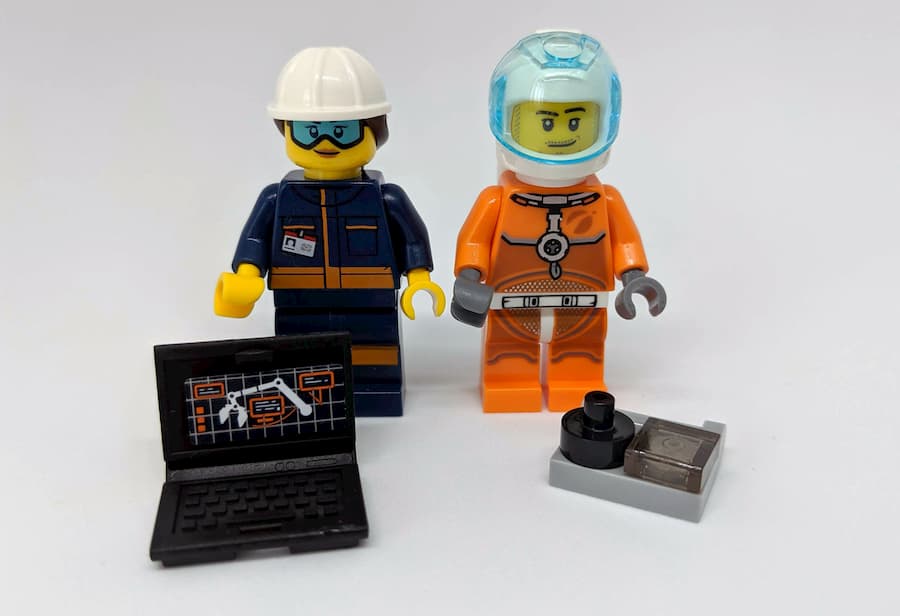 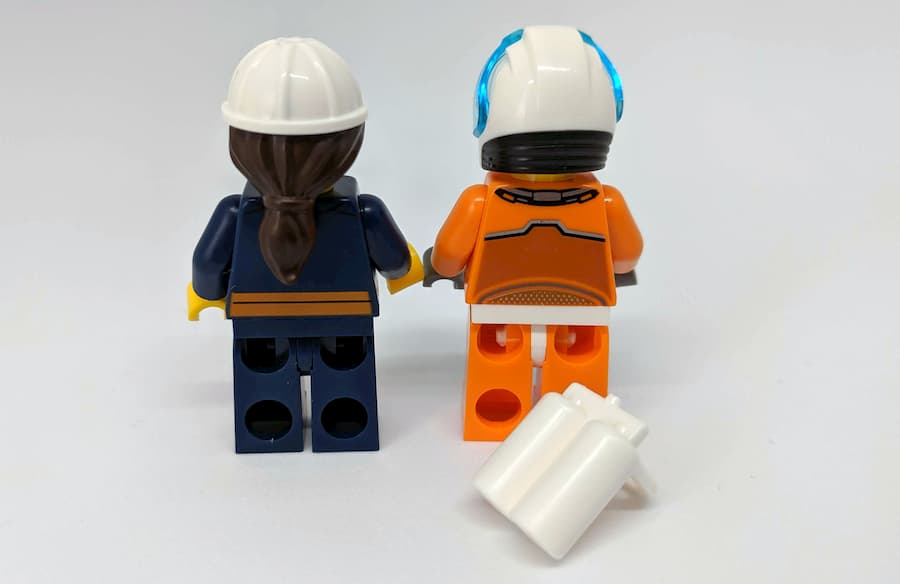 The bits and pieces that come with the set are quite nice, although mostly superfluous. The solar panels are created with stickers – two of only four in the set (the others being a small space symbol on the side of the vehicle, and a laptop screen). Everything else is rather pointless; the type of small stuff that ends up getting lost if it’s not secured to anything bigger. My favourite, though, is the two space rocks that come included with the set. Inside, they’re bright pink and shiny, giving the illusion of being a precious gem.

The Rover vehicle is, obviously, the star of the show. An empty space in the back gives you a good place to store the smaller parts of the set, and the large printed windshield is easily removed to place a minifigure in the cockpit to drive. The six chunky wheels set the vehicle apart from much else available at the moment; the gold trims inside coupled with the gold detailing on the side of the vehicle really makes it stand out.

The best part of LEGO City 60225 Rover Testing Drive, though, is its working crane and claw. Technic pieces are used to make a pivoting and folding crane, and an elastic band is used to create a claw that can actually grip. There’s some fun to be had with this… 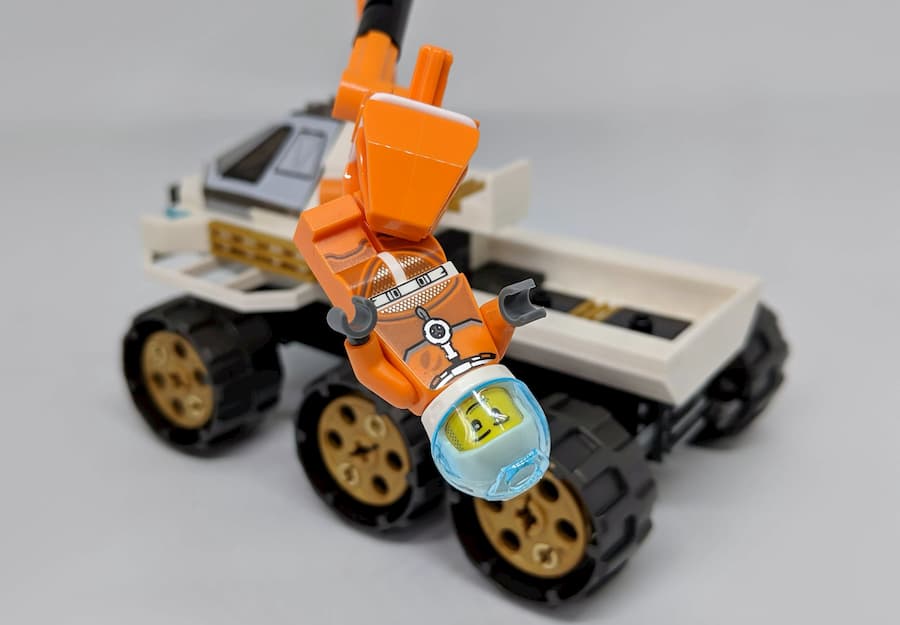 It’s been a few years since LEGO took to space, so if you’ve missed this theme, then you’ll be pleasantly surprised by the Rover Testing Drive and the rest of the space sets that are set to release on 1st June. This one isn’t the biggest, but it’s a pleasant little build that won’t take you much more than 20 minutes. And for younger LEGO builders, it’s the perfect playset to start up a whole space-themed collection.