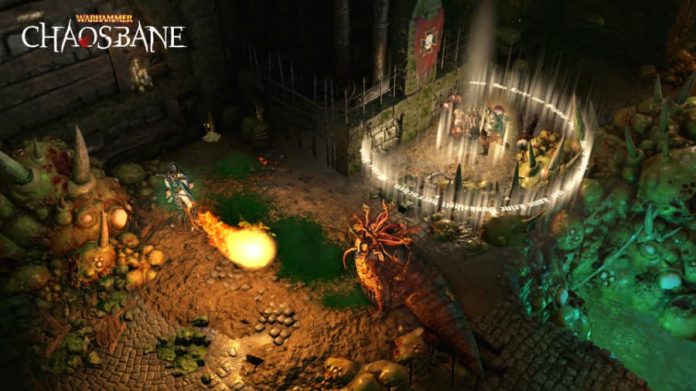 Set for release on 4th June, unless you bag the Magnus or Digital Deluxe edition which gives you early access from 31st May, Warhammer: Chaosbane could be the next addiction for fans of Diablo 3.

A loot-filled action RPG with four playable character classes, lots of skills, and more enemies than you can shake a stick at, we were very impressed with Warhammer: Chaosbane when we took part in its beta a short while ago. The only thing we were uncertain of was whether it would hold our attention once we finished its story. And you know what? It seems like it might.

BIGBEN and EKO Software has revealed that upon completing Warhammer: Chaosbane, players will be able to restart with a new character while keeping everything they previously unlocked. That means they’ll be able to craft from the outset, and will have access to any money and fragments that they earned. Additionally, three new modes will become available: Expedition, Relic Hunt, and Boss Rush.

Expedition mode will allow players to quickly get into a game and explore randomly-generated levels alone or with friends. Relic Hunt, on the other hand, requires players to purchase a map from the game’s Collector’s Guild, granting them access to a dungeon which lets them obtain heroic gear. And finally, Boss Rush lets players make their way through all the game’s bosses as quickly as possible in order to test their character’s might.

A mixture of paid and free post-launch content has also been announced for the game. The first free update will add a new difficulty level and more gear to the game. After that, a permanent death mode is going to be added, as well as a new heroic set for each character and yet more difficulty levels. The maximum character level will also be raised.

On the paid DLC front, the first DLC will simply offer new emotes and a passive skill that increases the chances of you finding heroic items. The second DLC will then add a passive skill that makes it easier to find God fragments, as well as an alternative God skill tree for each character. New companions for all the characters will be added via the game’s third piece of DLC, while the fourth will introduce an entirely new story, separate from the main campaign.