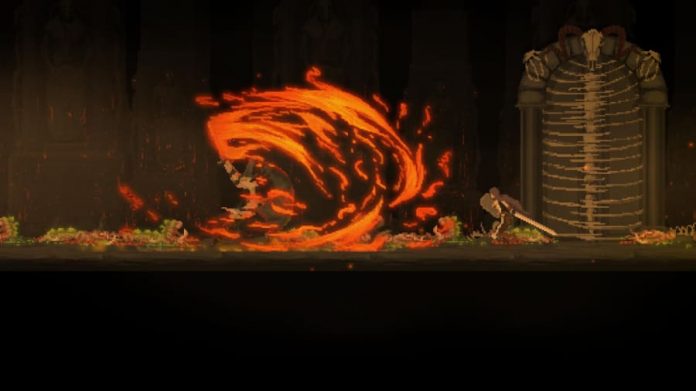 Available right now on PC and coming to PS4 and Switch later this year, Dark Devotion is not for the faint of heart.

You are a Templar, a holy crusader who seeks to rid the world of darkness. Finding yourself in a mystical temple full of foul creatures and unusual magic, however, your faith will be tested.

It’s pretty easy to compare Dark Devotion to a game like Dark Souls. They have many similarities, after all. They’re both mysterious, have large worlds for you to explore, and feature tense combat that relies on skill. They also both use death as a learning process. But Dark Devotion isn’t a 3D adventure game, it’s a 2D side-scroller.

After a brief introductory sequence, you find yourself in Dark Devotion‘s hub. From there, you can interact with a number of NPCs before heading out to explore the dangerous temple. And once you’ve discovered the plans for some new items, you can kit yourself out at the blacksmith before venturing out, too.

Honestly, be prepared to find yourself back at the hub fairly often, because Dark Devotion takes no prisoners. And surprise, surprise, it’s where you start from whenever you fall in battle. You see, being a roguelike, Dark Devotion is a game all about dusting yourself off and trying again. With each death, you’ll hopefully learn something new. And there are also some helpful features that will make your adventure a little less arduous as time goes on. 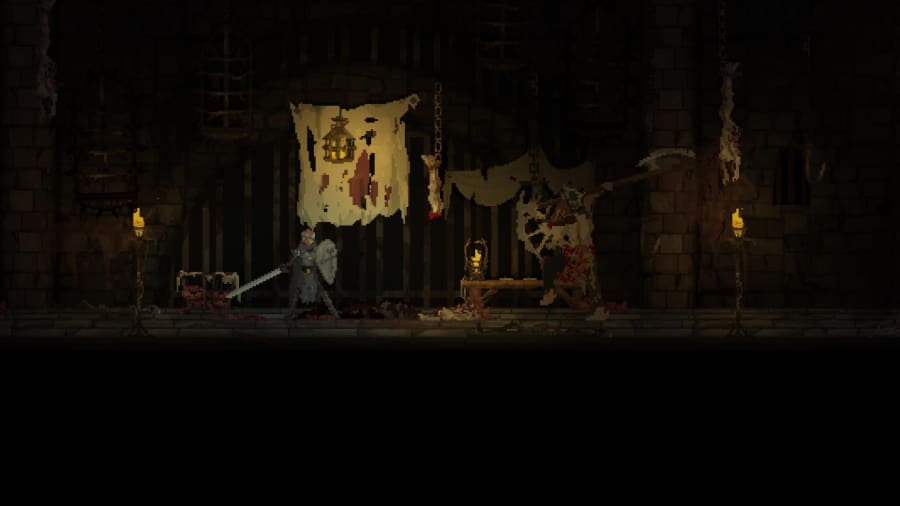 As already mentioned, plans for new equipment can be found, enabling you to start each run with better gear. And as you play, you gain special orbs that can be used to unlock a range of permanent perks. There are even teleportation gates to allow you to jump partway though the last dungeon you tackled, and runes to be discovered that permanently improve your stats. Even with all this help, though, Dark Devotion still remains a challenge.

Hallways are seeped in darkness, meaning you’ll often hear enemies before you can see them. And traps such as spike pits and rotating blades make fools of those who rush in. Dark Devotion is as much a horror game as it is action. Progress is best made cautiously, and if you have a shield, it would be wise to raise it as soon as you hear an enemy. They might be closer than you think, after all. Or armed with a bow and arrow. 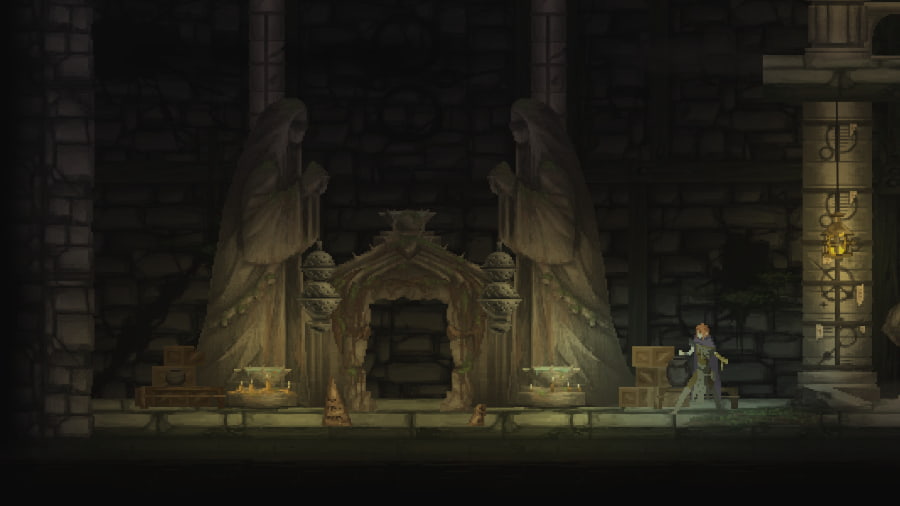 Initially, the experience can be frustrating. Newcomers shouldn’t be surprised if they die often during the first hour or so. Once some stronger equipment has been acquired and you’ve got your head around Dark Devotion‘s controls though, you find yourself progressing deeper and deeper into the temple. The frustration eases up, replaced by a feeling of achievement every time you overcome a boss or make a helpful discovery. Again, like Dark Souls, success doesn’t come easy, but it means that when you do taste it, it is sweeter.

Dark Devotion is available on Steam for £17.49/$19.99. It’s single-player only, has all the usual Steam features such as achievements, and has full controller support. If you’re a fan of Dark Souls looking for something new to play, it’s definitely worth checking out. Although anyone who likes a challenge is sure to enjoy it as well.