Dragon Star Varnir has more dragons in it that any other game ever. In fact, pretty much every enemy you fight in it is a dragon.

The majority of the game’s characters are destined to become dragons, too, including the lead, Zephy. As a member of the Knights of Requiem, his sole purpose is to hunt down witches. But after running into a dragon which gravely injures him, it’s witches that save him by making him drink dragon blood. It’s for their own benefit though, and comes with an extra surprise. Zephy is now also a witch, which is unusual because there are no male witches.

Witches are troubled beings in Dragon Star Varnir. As well as being hunted down by the Knight of Requiem, they need to drink dragon blood and eat dragon meat to prevent themselves from going insane. However, if they live long enough they’ll turn into a dragon themselves. Needless to say, they don’t have an easy life, despite having incredible powers. Shocked by his predicament, Zephy is wary of his new witch companions at first, but he quickly warms to them after discovering more about their condition and seeing how kind they are. And discovering that their curse may somehow be lifted, he joins them in a perilous adventure.

Honestly, Dragon Star Varnir‘s story surprised me. It’s much better than it initially seems. It’s quite dark, and there are some heartfelt moments strewn throughout its running time. It’s a story of loss and hope; of the uncertainty of the future and the chance for a better tomorrow. There are some clichés along the way and also a bit of fan service, but they’re never troublesome enough to spoil the yarn that unravels. There is perhaps a little too much dialogue at times though, slowing the pace of the game down to a crawl. And the way the story is told isn’t always that engaging. 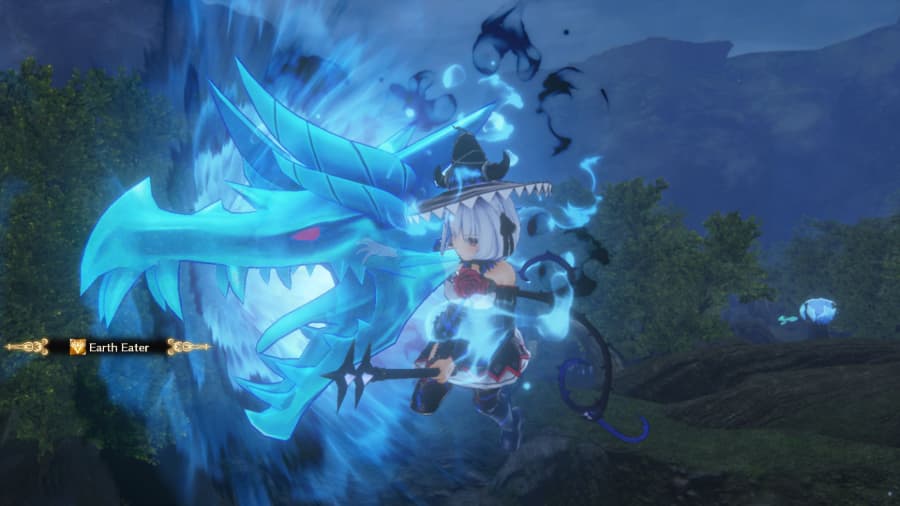 Like many modern JRPGs, Dragon Star Varnir feels more like a visual novel at times. You might sometimes sit clicking through text-boxes of dialogue for 20 minutes or more, while character portraits bob and slide across the screen. But then it gives you control, and the gameplay will have you hooked. In each chapter you can head out and explore fields from a third-person viewpoint, and each playable character has their own skill that aids your progress. Zephy can dispel magic barriers, for instance, while Laponette can raise bridges made of light so you can walk over bottomless pits. It’s formulaic, sure, but it adds a bit of thought to your adventure.

When exploring, you have more to worry about that what skills you have available though; enemies roam free, and are eager to eat you. Battles can be avoided if you wish – you can even take flight to easily evade pursuers – but if you want to avoid struggling at a later date it’s wise to enter combat frequently so you can level up and gain new skills. When you do enter battle, you’ll find that both your party and enemies are airborne, with three levels of space to occupy. 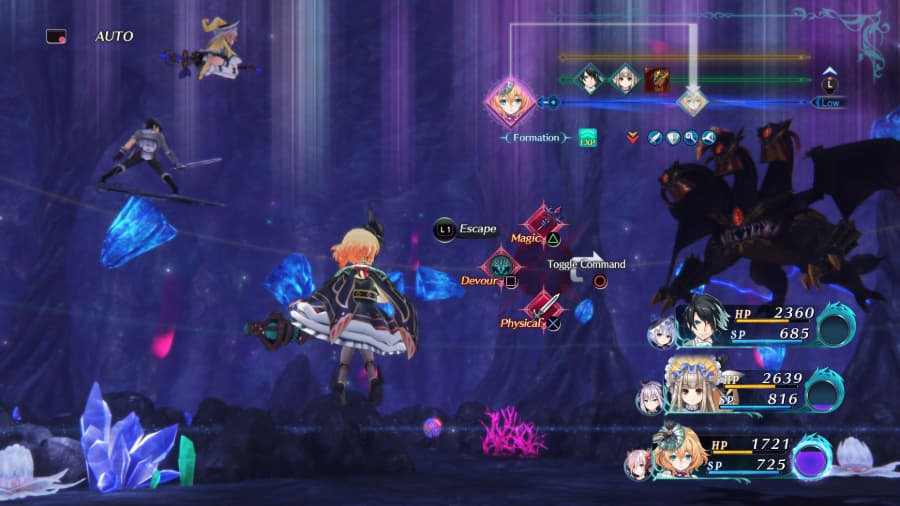 You’ll need to move onto same level as enemies to perform melee-based attacks, but magic attacks can be performed anywhere. It adds considerable depth to the battle system, with some attacks affecting entire columns or rows. You need to be aware of both the position of your characters and your enemies, and stat bonuses are given if you hold a formation.

Adding even more depth to the combat system is the ability to temporarily gain the powers of a dragon when a gauge is full. After a transformation scene, which you can skip if watching it gets too tedious, you deal increased damage and can withstand more punishment. It’s just a shame that you have no control over the activation of it. When the gauge gets full, you turn automatically.

You can also devour your enemies in Dragon Star Varnir, which not only restores a small amount of your HP and SP, but also allows you to gain an enemy’s core, which is key to obtaining new skills. After obtaining a core, points can be used to purchase new abilities and stat boosts on a grid. The number of skills you can equip is limited however, and the combined power of them is also kept in check. Still, there’s a lot of room to create a highly customised party. 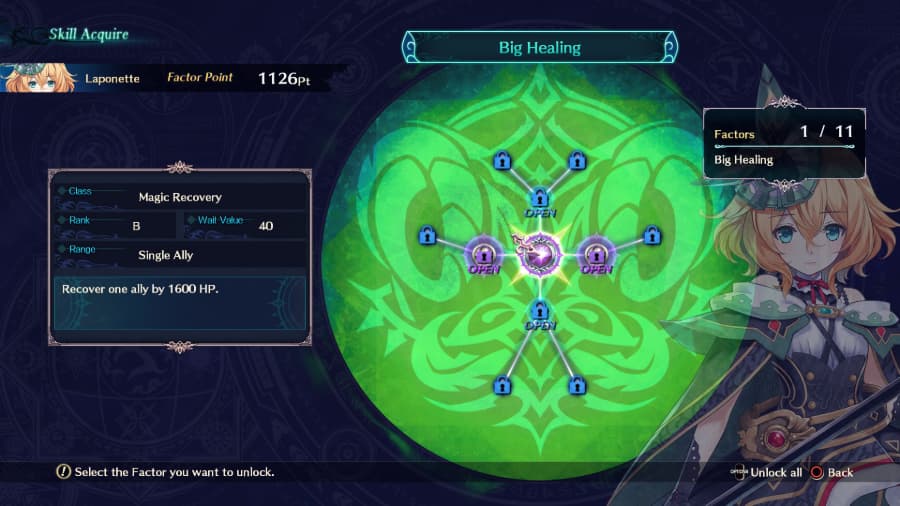 One thing I particularity like about Dragon Star Varnir is its elixir system, which allows you to create concoctions that summon a dragon when consumed. The strength of the dragon summoned depends on the catalyst used when creating the elixir, with stronger dragons dropping better items for you when defeated. It’s a good way to power up your party while back at your den, as strong dragons provide a lot of XP and have a chance to drop great items.

Thanks to multiple difficulty levels, Dragon Star Varnir can be made as easy or hard as you like. Playing on easy certainly reduces the need to grind. There are also multiple endings to discover, at least one of which is tied to a party insanity meter which looms over you as you play. A single playthough won’t take you as long as many other JRPGs – just under 30 hours or so – but it’s better for it. It’s a game that doesn’t overstay its welcome or feel dragged out. 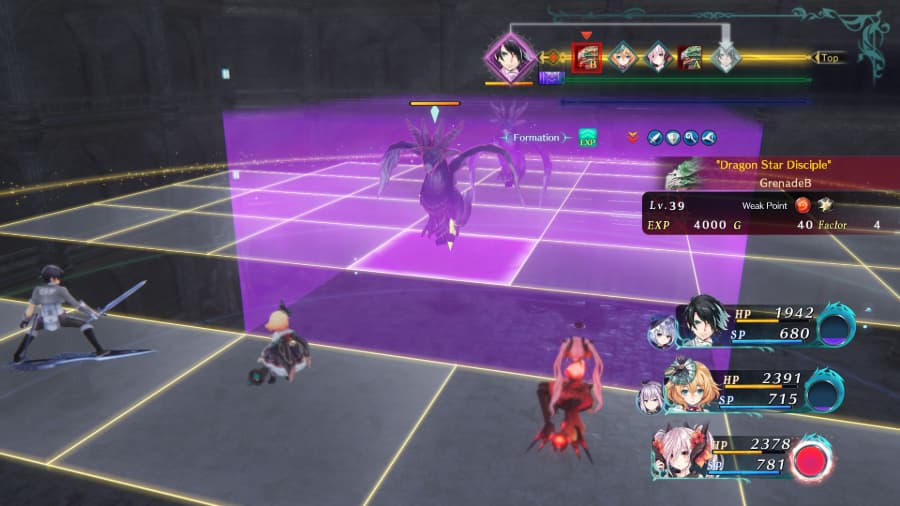 Visually, Dragon Star Varnir isn’t very impressive, but it’s nice enough. Character art is nice and their 3D models do them justice, but the enemies you encounter are mostly bland. Most of the game’s environments are a little samey, too. If often feels like you’re making your way though an environment you have before just with a palette swap. Dragon Star Varnir does have a good soundtrack though, and you have the choice of either Japanese or English voice acting.

It’s not going to be remembered as a classic, but Dragon Star Varnir is one of the better JRPGs available on PS4. Its engaging story and deep character development enables you to look past its somewhat budget presentation and enjoy it for what it is – a JRPG that feels like it has come straight out of the PS2 age. And I mean that as a compliment. It’s old fashioned in many ways but it has some good ideas, and they’re likely to compel you to reach at least one of its conclusions; quite possibly more thanks to it being enjoyably concise.

Dragon Star Varnir is available on PS4. Buy it now on Amazon.