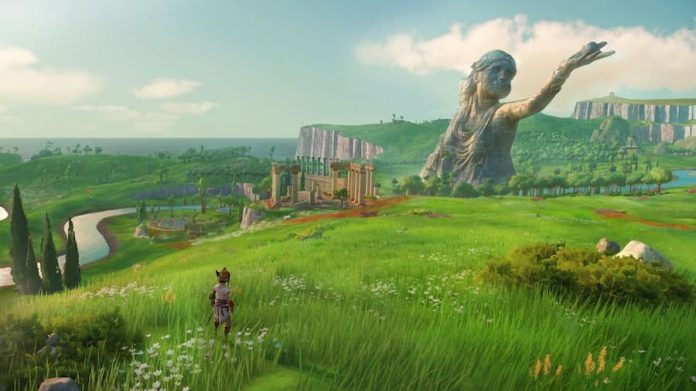 Many people went into watching Ubisoft’s 2019 E3 conference assuming that the expected new trailer for Watch Dogs 3 would be the highlight of the day.

And maybe it was for some, but not for me: the newly announced Gods & Monsters may well have just stolen the spotlight from Watch Dog Legion’s highly anticipated reveal.

If you’d have asked me at any point in the last several months what my perfect action-adventure game would look and play like, I’d have said a cross between Assassin’s Creed Odyssey and The Legend of Zelda: Breath of the Wild.

Well, looks like I’m in luck. Gods & Monsters, which is releasing next February on consoles and PC, looks like it may be exactly that. And while last night’s teaser trailer didn’t give too much away, it may well be that perfect combination.

Considering it’s being developed by the team behind Assassin’s Creed Odyssey and leans heavily into Greek mythology, just like Odyssey, it’s very easy to see the influence Assassin’s Creed has had on this game. But there’s still a lot to pick out and explore. I’ve picked out eight of the most exciting elements of Gods & Monsters to me so far.

Perhaps the most eye-catching part of Gods & Monsters‘ trailer is the setting: the Isle of the Blessed, set in the world of ancient Greece. It’s absolutely stunning. From the peaceful lake and the wonderful landscape, to the gorgeous ruins and luscious views, everything about the setting for Gods & Monsters looks simply awe-inspiring.

It looks so similar to Breath of the Wild, too. Not just in its art direction, but in the lay of the land. The trailer shows the hero standing atop a hill, with wonderful views in each direction. This allows for distant landmarks to be seen, which encourages exploration, and with the addition of being able to ‘float’ off high perches (as many who saw more gameplay at E3 stated), Gods & Monsters looks like it’ll be the perfect world to explore.

The gorgeous setting of the Isle of the Blessed is added to by the incredible art design. The painted art style adds to the sense of Gods & Monsters being a storybook style of game, with a sense of childhood wonder being created. The trailer adds to this by showing new parts of the environment being painted in.

The sense of wonder that the art design inspires is aided by the whimsical music. Everything about the art direction of Gods & Monsters points at a beautiful adventure, and the setting looks ripe for exploration. The Isle of the Blessed looks like a setting players could spend days exploring and searching; not just for new areas and items, but for the sheer joy of the visuals. 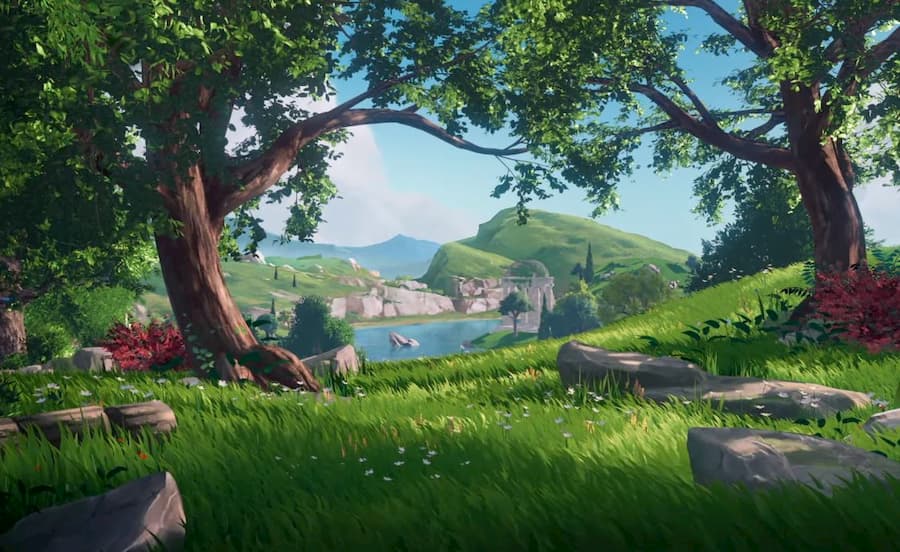 The official website for Gods & Monsters describes the journey as being a “storybook adventure”. This beautifully matches the previous elements of the setting and graphics. Everything about Gods & Monsters suggests an engaging story full of wonder.

The story revolves around the hero, Phoenix, who is the “greatest hero of all time.” The developers for Gods & Monsters have explained that their research for Assassin’s Creed Odyssey helped them come up with the idea for Gods & Monsters, and this seems to be a much more ‘child-friendly’ adventure. If all the other clues relate to the story too, Gods & Monsters should include a fully inspirational and beautiful tale.

Ubisoft has already confirmed that Gods & Monsters‘ protagonist, Phoenix, will have items that are upgradable and customisable. Assassin’s Creed Odyssey had one of the best upgrade systems in any action-adventure RPG, and it looks like Gods & Monsters may follow suit.

It also suggests at a story arc based around a hero who is down on their luck, but is required to show their heroic traits once again. A type of rags-to-riches story where the protagonist needs to grow. This is very similar to Link from Breath in the Wild. With a setting that looks perfect for exploration, it seems likely that there will be many opportunities to find ways to upgrade Phoenix, and that is so exciting. 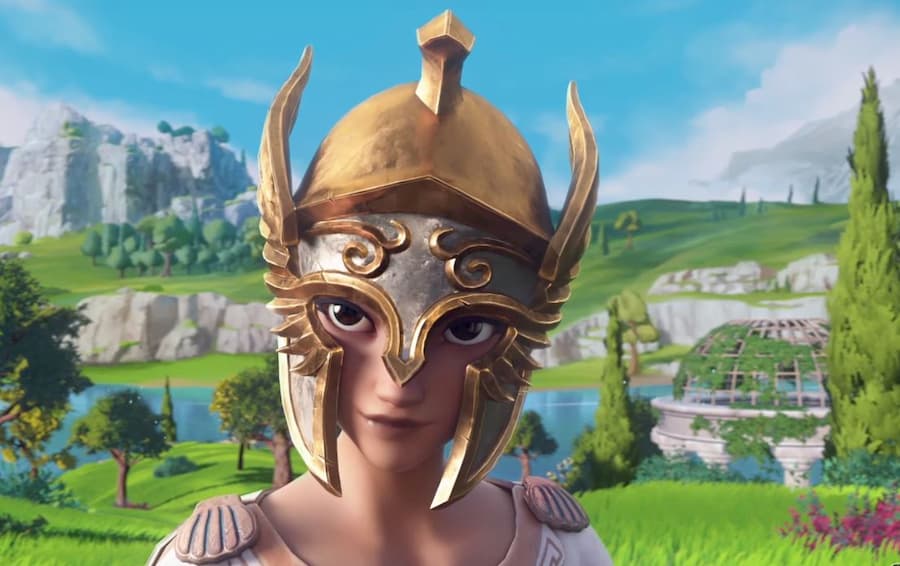 Assassin’s Creed Odyssey is full of fascinating history based on ancient Greece, and hopefully that will continue with Gods & Monsters. However, the painted design indicates that it doesn’t need to be as ‘realistic’ as an Assassin’s Creed game, meaning there could be many wonderful fantasy elements.

There’s the potential to include a variety of gods and goddesses, and even villains and mythical beasts. There’s so much that could be included within Gods & Monsters, and the developers have a great track record of implementing the lore in a highly engaging manner.

Gods & Monsters‘ story revolves around Typhon, one of the most terrifying gods of Greek mythology. The inclusion of a mythical being such as Typhon indicates that other enemies will likely based based on ancient Greek lore, tooe.

The official website also states that we can expect Gorgons, Hydras and Cyclops within the game. These enemies should also create some brilliant showdowns, and each could be just as spectacular as Typhon. 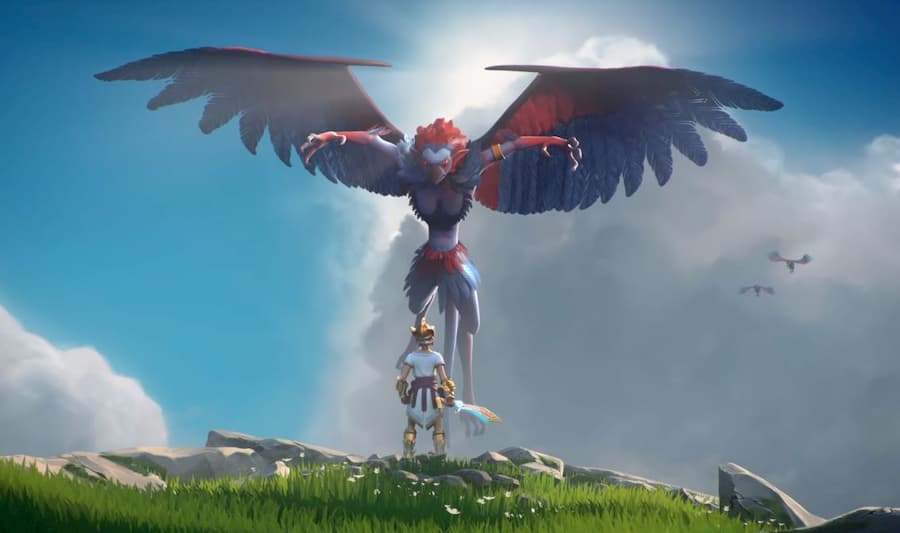 The trailer shows off a brief clash between Phoenix and an enemy and it looks exhilarating. Sadly, there’s no footage of in-game combat gameplay just yet, but if it’s anything like the trailer suggests, then it will be fantastic. Phoenix will also be able to use a bow and arrow, meaning that the fighting will hopefully be quite diverse.

There’s also the explanation on the official website that Phoenix will be able to “wield the power of the gods.” It’s unclear what these powers could be, but it seems almost certain that they’ll tie in to combat somehow. Having god-given powers would be an incredible addition to Gods & Monsters.

The voice over in the trailer is from none other than Homer (no, not Simpson). The premise is that he is narrating this tale to his grandkids. It links to the idea of Gods & Monsters‘ story being one of legend, and that all the events within the plot matters. It also implies that there will be some brilliant storytelling.

The addition of a narrator links to the storybook idea, which is once again supported by the graphics and setting. Everything points at Gods & Monsters being a tale for of wonder and inspiration, and Homer feels like the perfect narrator for this.