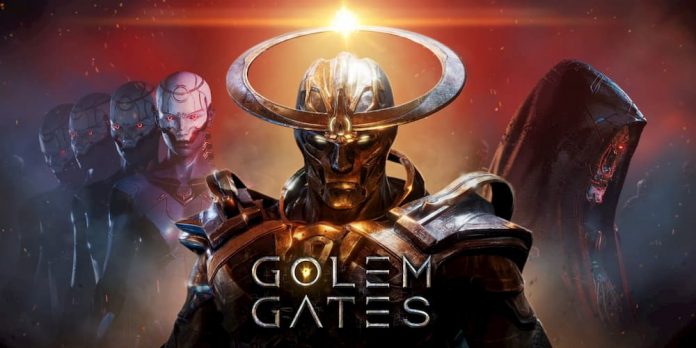 In a land completely ravaged by war you will have to join the battlefield and command armies in a dangerous, dark world.

Golem Gates from indie developer Laser Guided Games is a real time strategy/deck building hybrid that originally released for PC back in March. The game has now made its way over to the Nintendo Switch, PS4 and Xbox One for console players to take a stab at. Players will build their own decks, control huge armies of robots and machines to do your bidding to try and the get the world back into some semblance of an order.

Players will take on the role of the Harbinger. The Harbinger is a huge bad-ass looking guy who takes centre stage on the battlefield in his shiny gold armour. He is able to control dozens of units of machines all at the same time. Your goal using these units is to force your way across a variety of landscapes, taking out enemy forces as you go with the ultimate goal of keeping your Harbinger alive while destroying the big ‘ole Golem Gates.

When you start the game you’ll probably be a little overwhelmed, especially considering there’s a lot to look at even on the main menu. To help you along, you’re able to do a “learn-by-doing” tutorial that will teach you what the different items on your screen mean during battle, how to place units, how to move, etc. As you move from chapter to chapter you’ll learn a few more things to help you along, but the tutorial is the best way to get the crash course on what’s going to happen on the battlefield. 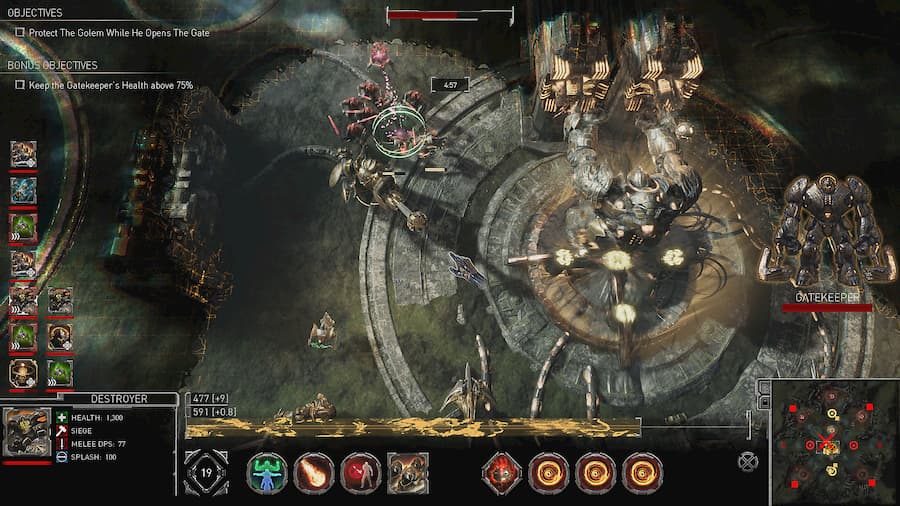 The main mechanics of Golem Gates involve using energy to purchase troops, turrets, mines, attacks, etc. You’ll have a specific goal you’re trying to achieve (destroy a Golem Gate or protect a machine from enemy attacks, for example) and you’ll have to move your Harbinger and troops along the map to reach the end. Along the way you’re going to run into loads of enemies – so you’ll need to spend your energy wisely as to not get stuck in the middle of battle with no way to protect your Harbinger. If the Harbinger dies, it’s game over and you’ll have to start over from the beginning of the level.

As you move about the map you’ll probably want to rush as quickly as you can towards your goal, but patience is a virtue; you’ll be able to gain control of Nano Generators around the map which will increase your production of energy – which is what you need to be able to play your cards. When you capture a generator you can leave troops there to defend it while the rest of your group moves forward. Unfortunately, enemy troops are going to come to try and take the generators back, so you’ll have to check back on them from time to time. 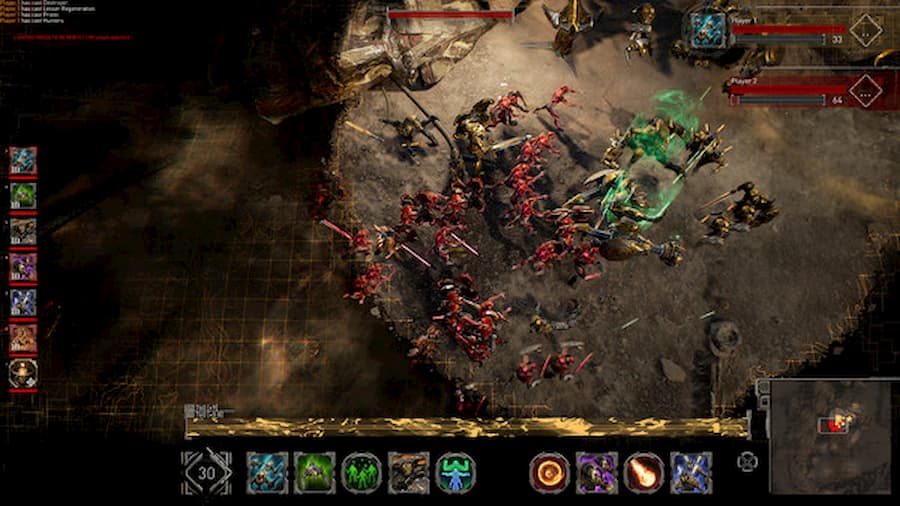 Golem Gates gets fast paced pretty quickly. Even in chapter one I found myself spamming buttons simply to see what would happen because my troops were constantly being attacked. And as much as I love hearing, “The Harbinger is under attack” over and over, I prefer no talking when I’m trying to concentrate. You’ll get the hang of it eventually, but it will never stop being stressful. Especially when it comes to your deck.

Each card (called glyphs) in your deck is a different type of weapon, troop or ability that you can use on the battlefield. Your deck is made up of 30 cards total that are randomly shuffled at the start of the game. Like with all deck-building games, there’s an element of luck involved where there’s a chance you aren’t going to get the kind of spell or troop that you need in order to eliminate the big angry robot before he destroys all your tiny robots. And that’s where the combination of RTS and deck building goes astray. In a regular RTS you’d likely be able to choose exactly what you want out on the battlefield so that you don’t get overwhelmed so easily.

In Golem Gates, everything moves so quickly that you might send out troops not realising that the rest of your hand is only a bunch of useless spells or traps that you can’t use. Things rarely go as you plan when in battle, and I found myself playing the same levels multiple times because of this. 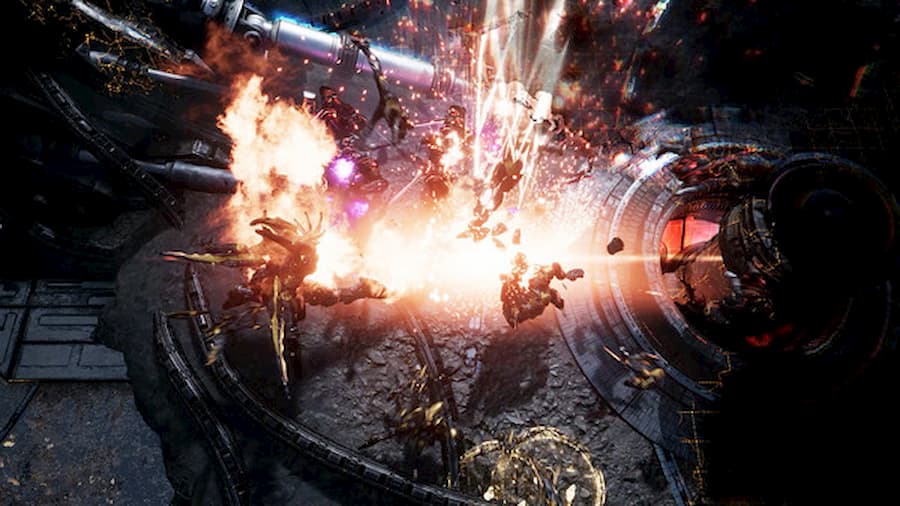 There are some other little things when it comes to gameplay that put a damper on things in the heat of battle, too. It’s pretty difficult to tell your troops apart so you’ll probably have to try and memorise what each troop looks like in order to see who is who during those huge battle moments when there’s dozens of machines on screen. This really made gameplay difficult at times, especially if I wasn’t sitting close enough to my screen to be able to distinguish everything clearly. Additionally, in heated moments you might find yourself spamming a few spells, but one throw in the wrong direction and you’ll blow up half your battalion. It can be argued, of course, that you should keep an eye on what you’re throwing – but if my troops can stand multiple blows from oncoming enemies you’d think they’d put up with one innocent little fireball. But no.

However, Golem Gates really, truly shines in its sound design and soundtrack. When I first loaded up the game I listened to the menu music for a few minutes before I started playing. The fast-paced battle music will give you goosebumps as well as the sounds that occur while you’re fighting. Lots of love and dedication clearly went into making the world of Golem Gates as immersive as it could get. 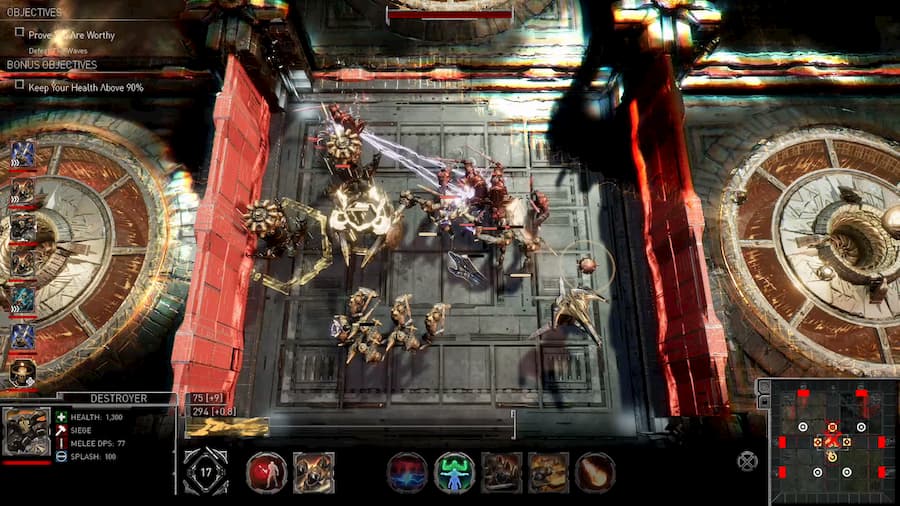 You’ll be pleased to learn that Golem Gates has absolutely zero micro-transactions, which for a game with deck-building elements is a boon. You’ll earn everything you can by simply playing through the game. And building decks is really fun. Once you learn how everything works you’ll get a feel for what cards you like to use and what will sit in your deck gathering dust, unused for the majority of the match.

Golem Gates’ main campaign will take you around eight or nine hours to work through, and a survivor and trial mode will give you plenty more to sink your teeth into, should you want. You can also play online 1v1, 2v2 or 4 player free-for-all matches. If you’re a fan of deck building it’s well worth a shot, but the fast pace might not be for everyone. It’s a little rough around the edges, but Golem Gates’ fantastic audio design and the fun deck building is enough to carry it through.

Golem Gates is available on PC, PS4, Xbox One and Switch. We reviewed the PS4 version. 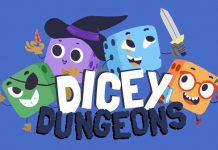 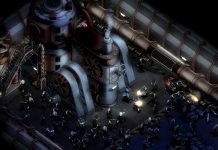 They Are Billions Review 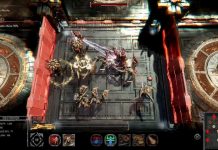 Strategy Card-Game Golem Gates Out Now on PlayStation 4, Xbox One and Nintendo Switch 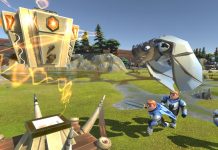